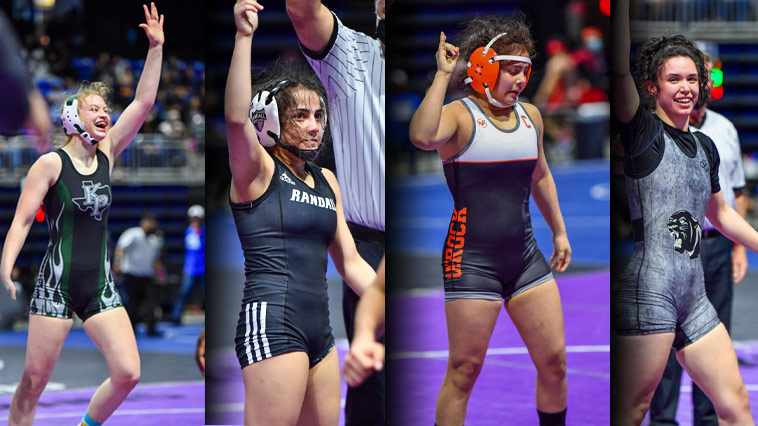 95 Avery Stout a junior of Canyon Randall wins her 1st state championship.  Stout went 19-2 on the season with an early loss to Tascosa freshman Zurri Zamora which she has redeemed 3 times since including in the state finals match where Stout got the major by 11-2.  Stout is a 2x state placing placing 4th in 202 and 1st in 2021.

102 Jaryn Ortegon a junior as well as Stout above for Canyon Randall was the 2 of 3 finalist to get their championship win.  Like Stout, Ortegon had to defeat a Tascosa wrestler Miliyah Pacheco for the 5th time in the finals to achieve this feat doing so by decision 4-2.   Ortegon went 23-1 on the season and it isn’t listed on track who her loss was to.  Ortegon is also the little sister of Johnathan Ortegon a 3x state champ for Canyon Randall.  Ortegon is a 3x state qualifier placing 6th in 2020, and 1st in 2021.

110 Kylie Robledo a senior of El Paso Hanks gets the win here after placing 2nd last season.  Robledo beat the 3rd Canyon Randall wrestler to reach the finals Avery Martinez whom had just upset returning state champ and #1 ranked wrestler Avery Ashley of Lovejoy in the semifinals.  Robledo won by a 6-3 decision over Martinez a rematch of the region 1-5A semifinals match where Robledo won by fall at the end of the 1stperiod.  Robledo went undefeated on the season as well at 19-0.  Robledo is a 3x district champ, 3x regional qualifier 3x placer 2021 champ, and 2x state finalist and 2021 state champ.

119 Tatianna Garcia a junior from Amarillo Caprock.  Garcia for the last couple years has been a 3rd place finisher at state but not this season.  Garcia was able to keep her undefeated season ending at 25-0 going with a semifinal win over up and coming freshman Madison Canales of Richmond Foster putting her into the finals against #1 ranked and returning state champ Tabitha Wood of Frisco Independence.  It was quite the match as well but Garcia pulls out the 3-2 decision to win her first state championship making her a 3x state placer placing 3rd in 2019, 3rd in 202, and now 1st in 2021.

128 Aubrey Yauger a junior of Burleson Centennial.  Yauger like Garcia above finally got her championship after placing 3rd the last two season.  Yauger went undefeated this season at 17-0 and breezed through the competition pinning everyone in her path except Belen Rios of Frisco whom she met in the regional semifinals only getting a 9-2 decision. However as Yauger was pinning everyone in the state tournament, Rios met Yauger again but this time in the state finals and this time Yauger gets the fall at 1:04 in the first period to claim her first championship.  Yauger place 3rd in 2019, 2020, and 1st in2021 at the UIL state tournament.

138 Maddie Sandquist a senior of Humble Kingwood Park went back to back at this weight for her 2ndconsecutive state championship going undefeated at 30-0.  Sandquist pretty much handled her business defending her title including a notable win over the 148-5A state champ earlier in the season over Avery Beckman.  Sandquist did have a close match in the regional finals against Daniella Brown of Houston Northside only getting a 2-0 decision.  Sandquist was never to see the 3rd period in her state tournament matches getting the fall in the 2nd period including her finals match over Maya Lewis of Dallas Sunset giving Lewis her first loss on the year.  Sandquist is a 4x district champ, 4x regional placer and 3x champ, and 4x state qualifier placing 4th in 2019, 1st in 202, and 1st in 2021.

148 Avery Beckman a freshman of Friendswood High School is the 5A equivalent to the 6A-148 freshman state champ.  Beckman has started her journey to become a 4x state champ and has the credentials to do so. Beckman went 15-1 on the season with the 1 loss only because the senior state champ from 138 Sandquist bumped up to wrestle her in a dual earlier in the season.  Beckman make quick work out of her matches at the state tournament never making it to the 3rd period in any of them.  Beckman faced Jazmine Garcia from El Paso Ysleta in the finals getting the fall at 2:49. Beckman beat the former #1 wrestler Alana Curl in the regional finals to claim her early #1 status.

165 Elizabeth Grabiec a senior of Lewisville The Colony went from making the trip to state two previous years in a row and not placing to this year winning the whole tournament at her weight.  Grabiec went undefeated at 27-0 but her state tournament wasn’t a give me.  Grabiec had to go to the Ultimate Tie Breaker against Alex Guerra of College Station in the semifinals to capture the win UTB 7-6. Only to then in the state finals match face the #1 ranked wrestler Jillian Wold of Comal Canyon who was making her 2nd consecutive trip to the finals.  Grabiec was able to get the fall 41 seconds into the 3rd period to claim her state championship.   Grabiec is a 3x district placer 2x champ, 3x regional placer 2x champ, and 3x state qualifier and 2021 state champ.

185 Aalyah Villarreal a senior of El Paso Hanks came into the tournament ranked #2 behind then #1 Ki’Aundra Green of Dallas Kimball making her 2nd trip to the state tournament.  Villarreal met Green in the semifinals and made quick work of her getting the fall in 1:01. Villarreal then met Sierra Hall of Waller in the finals and got the fall as the 2nd period came to an end.  Villarreal went undefeated on the season at 20-0 and is a 3x district placer 1x champ, 3x regional qualifier and 2x placer, and 2x state placer placing 6th in 2020 and 1st in 2021.

215 Lexi Shannon a junior of Humble Kingwood Park High School makes her 3rd trip to the state tournament not placing her previous 2 times.  Shannon came into the state tournament ranked #2 behind previous #1 Leilani Sanchez of El Paso Andress who placed 3rd last season.  Shannon after getting a 47 second fall in her first match met up with Sanchez in the semifinals and got the fall 50 seconds into the 2nd period. This set up a finals match with Northwest’s Trinity Washko a sophomore who made it into the 3rd period before Shannon got the fall at 4:52.  Shannon went 28-1 on the season and track doesn’t show her one loss.