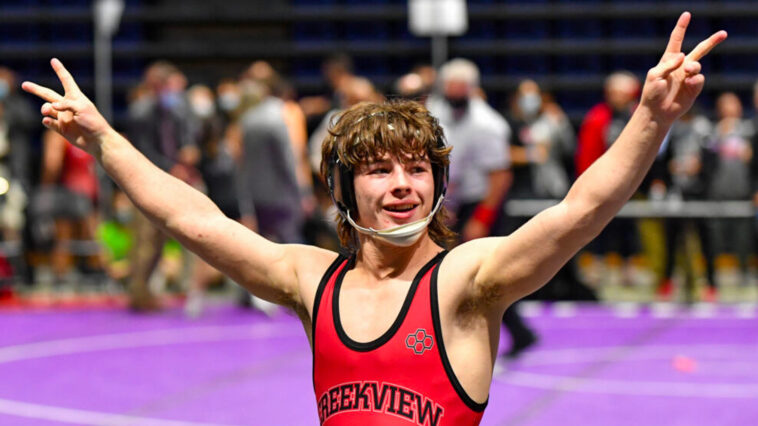 106 Ashton Bennert a sophomore of Canyon Randall wins his first state championship here over Braydn Valdez of Lubbock Monterey by fall right at the end of the 1st period.  Bennert ended his season with a 25-2 record with his only losses coming to the 6A champ at 106 Joseph Liescheski of Allen and Brandon Smith of Dumas at 113.  Bennert also won all 3 of his state matches by fall.

113 Kenneth “Conrad” Hendriksen a Junior from Carrollton Creekview was one of the 4 boys to win his 2ndconsecutive state championship this season.  Hendriksen pretty much breezed through his season going 28-0 with his only decision coming over Eli Biermann of Midlothian earlier in the season.  Everyone else was pinned, tech-falled, or majored including his finals match over Jayden Bustillos of El Paso Creekview 11-3.

120 Zachery Casias a junior of Lubbock High School. Casias after reaching the finals last season and coming up short he finally gets his state championship finals win over Canyon Randall’s Aidan Medina by decision 6-2. The state finals match was a repeat of the 1-5A regional finals match that Casias had to go into overtime to win SV-1 3-1.  Casias went undefeated this season at 26-0.

126 Andres Mendoza a senior of Canyon Randall is another who finally captured his state championship after making the finals and placing 2nd the last 2 seasons.  Kade Moore of Allen the 6A-126 champ kept Mendoza from an undefeated season going 28-1. Mendoza had a rematch of the regional 1-5A finals as well with Nathaniel Ruiz of Amarillo Caprock getting the win this time by major 10-1.  Mendoza is a 4x district champ, 4x regional finalist and 3x champ, and a 4x state placer placing 5th in 2018, 2nd in 2019, 2nd in 2020, and  1st in 2021.

132 Roberto Ruiz a senior from Dumas High School.  Ruiz makes his 2nd trip to the state tournament placing 3rd last season.  This season Ruiz was undefeated in the 5A division with taking only 2 losses from 6A wrestlers going 28-2 on the year.  Ruiz breezed through his district, regional, and state matches by either pinning or majoring all his opponents.  Hudson Herring of The Colony was Ruiz’s finals match whom Ruiz majored 12-5.

138 Ah Lee Yart a senior from Dumas High School. Yart a 4x state qualifier had some tough matches as he went 28-4 this season making the finals for the 2nd straight season.  Yarts last 2 matches in the state tournament were won by a 1-0 decision over Tyten Volk of Frisco Centennial in the semi-finals and then it took SV-1 5-3 for Yart to secure his finals and championship win over Anthony Criscoine of College Station A&M Consolidated who had the #1 spot all year at 138.  Yart is a 4x district placer and 3x champ, a 4x regional placer and 3x champ, and a 4x state qualifier placing 4th in 2019, 2nd in 2020, and 1st in 2021.

145 Jared Gallegos a senior from Canyon Randall captures the championship here and had to avenge not one, not 2, but 3 losses to earn his championship.  Gallegos went 28-3 with his losses going to Andres Suarez of Amarillo Tascosa (twice) once in a dual (SV-1 6-4) and in the District 3-5A finals 9-6 and Daniel McGurk of El Paso Hanks in the regional 1-5A semifinals 9-3.  Gallegos met Suarez a 3rd time in the state semifinals this time beating him by decision 5-4.  Then meeting McGurk in the state finals who was undefeated and winning by a 1-0 decision. What a way to overcome adversity.  Gallegos is a 3x state qualifier placing 3rd in 2019 and 1st in 2021.

152 Evan Atchley a senior at Colleyville Heritage had been wrestling everywhere it seemed at USA tournaments and it paid off as he claimed a state championship this season after placing 6th last season. Atchley went undefeated this year at 34-0.  Atchley biggest match came earlier in the season when he faced last year 132 state champ Felix Saunders of Midlothian and won in SV-1 3-1.  Since then he pretty much handled everyone in his path including Saunders again at the regional 2-5A finals where Atchley won by decision this time 9-3.  After getting past a tough Patrick Perea of Canyon Randall in the semifinals 8-6 Atchley faced Saunders for the 3rd time but this time in the state finals match where again Atchley prevailed for the win this time by major 10-2 for his 1st state championship. Atchley is a 4x district placer and 3x champ, 4x regional qualifier, and 3 x state qualifier placing 6th in 2020 and 1st in 2021.

160 Hank Meyers a senior of Burleson Centennial a 3x state placer who made the finals in the 2019 season finally gets his state championship win over Bryce McLaren of Leander Glenn High School by major 13-5.  Meyers end the season going 20-2 with no losses in the 5A division, but only to the 6A champ John Richardson, and the PREP champ Braedan Baller.  Meyers is a 4x district finalist and 3x champ, 4x regional qualifier and 3x champ, and a 3x state placer placing 2nd in 2019, 4th in 2020, and 1st in 2021.

170 Cullen Davee a senior of Argyle High School. Davee went undefeated on the season only wrestling only the first part of March before making districts going 15-0.  Davee has a notable win over PREP Champ Braedan Baller of Liberty Christian in early March.  Davee went on to secure his victory and state finals win over Kale Farrington of Canyon Randall in a 4-1 decision.  Davee is a 4x district placer and 3x champ, 4x regional placer, and a 3x state placer placing 3rd in 2019, 3rd in 2020, and 1st in 2021.

182 Branson Britten a senior of Canyon Randall. Britten is another of the 4, 2x state champs this season going undefeated 29-0.  Britten really wasn’t challenged all season pinning all his opponents in the 1st period but 2 and they got pinned in the early 2nd period.  Britten had Zeb Fulmer in the finals of Winnsboro who was one who made it to the 2nd period.  Britten is a 4x district finalist and 3x champ, a 4x regional champ, and a 4x state qualifier, 3x state finalist placing 2nd in 2019, 1st in 2020, and 1st in 2021.  Britten plans on attending Northern Colorado State University next season.

195 Jakob Underwood a senior of Lucas Lovejoy took this weight for his own.  Underwood who didn’t place last season at state went 31-1 this season pinning everyone in his path except a couple.  Underwoods only loss was in the regional finals to Jeremiah Marquez of Katy Paetow by a 6-5 decision.  Underwoods notable win was over the only returning state placing in the weight Corban Phelps of El Paso Hanks whom Underwood defeated in a 9-4 decision in the quarter-finals. Underwood then went back to his pinning ways by getting the fall over Josh Yorek in the semifinals and Jon Bray in the state finals to claim his championship.  Underwood was a 4x district placer and 3x champ, A 4x regional placer, and a 3x state qualifier placing 5th in 2019, and 1stin 2021.

220 Mason Ding a senior of Carrollton Creekview was yet another of the 4 wrestlers who claimed their 2ndconsecutive state championship back to back.  Ding looked to have some competition in late march only winning a few matches by decision, other then Ding pinned everyone in his path to his second state championship, except Karlo Sanchez of Dumas in the semifinals whom he beat by major 10-2 before securing a fall the finals over Kelby Hickerson of Austin Anderson.  Ding a nationally ranked wrestler went 26-0 on the season and is a 4x district finalist and 3x champ, 4x regional placer, and a 4x state qualifier winning 1st in 2020, and 2021.  Ding will continue his wrestling career at the next level in the Air Force Academy.

285 Marshall Hodges a senior of Midlothian finally claims his state championship after placing runner up last season.  It wasn’t an easy road though, it took TB-1 5-4 to beat Daniel Ocampo of Carrollton Smith in the semifinals and UTB 3-2 to beat Aiden Bulter of Rouse in the finals.  Hodges went undefeated on the season going 23-0.  Hodges is a 4x district placer and 3x champ, a 4x regional placer and 3x champ, and 3x state placer placing 5th in 2019, 2nd in 2020, and 1st in 2021.