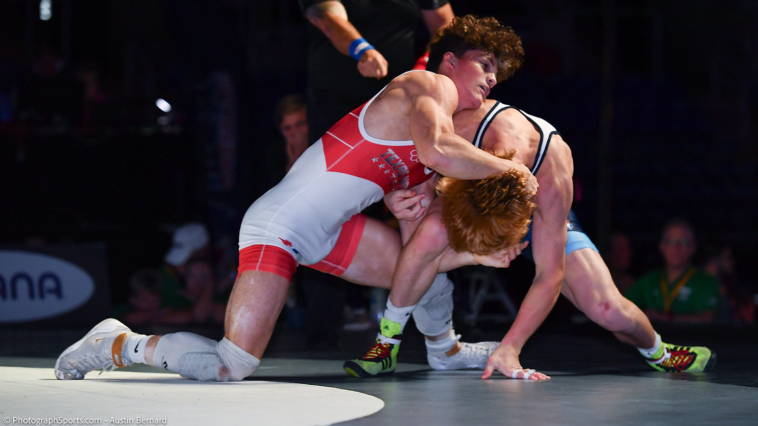 Day 4 at Fargo has been nothing short of fireworks all day long. The Junior Women kicked things off first, than Tagen Jamison put on a show in the Junior Freestyle finals, than the second half of the junior girls was nationally ranked wrestlers about every match. Some went home early, some stepped up.

We start with Tagen Jamison your Texas 138lb Junior Freestyle National Champion. Jamison was the only boys junior to All American in freestyle this year. Jamison was nothing short of spectacular in his finals match against #7 Casey Swiderski of Michigan. The match started out with each wrestler feeling each other out and Swiderski was warn for passivity and Jamison was awarded a point with 1 minute left in the first period. Than with 7 seconds left Jamison gets a last second takedown to end the 3rd period 3-0. With lots of scrabbles half way through the 2nd period Swiderski got a takedown on Jamison with the ankle pick, than with 1 second left Jamison gets the single leg then switches to the double leg and lifts Swiderski to his back ended the match 7-2 with a Jamison receiving the stop sign. The last Junior to win a championship you have to go back to 2015 when Nick Reenan was a double champ at 182lb in freestyle and Greco Roman.

Starting at 100lbs is Kaycie Tanimoto who is in the consolation 4 and will have to win the next 2 matches to get to 3rd place match. Tanimoto started the day off with a loss, than came back strong 5 wins in a row with the last match beating unranked Sofia Abramson of Nevada by fall in the blood round to reach her All American. Tanimoto next up is # 18 @ 100 Erin Hikiji of Hawaii. A win here can get Tanimoto on the national board.

#7 @ 112 nationally ranked Avery Ashley at 112lbs started out not giving up a point then got upset by Nevada in her 3rd match. Than came back strong 3 wins in a row including beating #16 Sydney Petzinger of New Jersey in blood round by last second fall in a back and forth match to put her into the All American rounds. Ashley ranked #7 @ 112 will face in her next match #4 @ 112 Hannah Hall of Florida.

#1 @ 112 nationally ranked Samara Chavez at 112 is un-scored upon in her first 4 matches winning by fall and tech fall barely going over the 2 min mark in her quarter finals match. Chavez had beaten #16 Sydney Petzinger of New Jersey in the quarter finals and will face off against #5 Ava Bayless of Pennsylvania in the semi finals. Chavez has been topped ranked for a couple years now but last placing at Fargo was in 2018

#25 @ 144 nationally ranked Aubrey Yauger has dropped down to the 132lb weight for her national showing. Yauger beat #6 @ 132 Taydem Khamjoi of California 20-10 in the quarter finals to reach the semi finals where she will no face #1 @ 132 London Houston of Washington.

#8 @ 138 nationally ranked Madison Sandquist had her only close call in the round of 16 where #12 @ 138 Sydney Perry of Illinois almost came back to beat her, score ended 7-7 Sandquist. Sandquist’s semi finals match will be against #6 @ 138 Savannah Gomez of California. Its been since 2018 that Sandquist All American, she place 8th in the cadet tournament.

#5 @ 152 nationally ranked and your 2021, 16U-152lb national champion Jasmine Robinson. Robinson was scored upon once in her 4 matches and that ended badly for the Oklahoma girl who got tossed on her head for a 5 point fall, hasn’t went 2 minutes yet in 4 matches. Will face #6 @ 152 Ella Nichols of Connecticut in the semi finals. Have we mentioned that Robinson is only going to be a Sophomore next year?

#2 @ 180 nationally ranked Brittyn Corbishley beat #15 Sierra Chavez by fall in the QF, un scored upon in 3 matches thus far. Looks un stoppable and will have the #1 @ 180 Jaycee Foeller of Missouri in her semi finals match. Corbishley placed 7th in the juniors in 2019 and 2nd in the cadet’s same year.

#18 @ 225 nationally ranked Lexi Shannon beat #12 Kailyn Garrett of Michigan in the quarter finals 10-0, and is un scored upon as well. Shannon will face off against #4 @ 200 Sam Calkins of California in her semi finals match.

#2 @ 200 nationally ranked Hannah Francis had a smaller bracket and with a first round bye started out in the quarter finals where she beat #5 @ 200 Andrea Smith of Florida by fall. and will now face #1 @ 225 Eliana Bommarito of Michigan. Francis was a 5th place finisher in 2019.

Below is the results of the 36 Team Texas Junior Women.