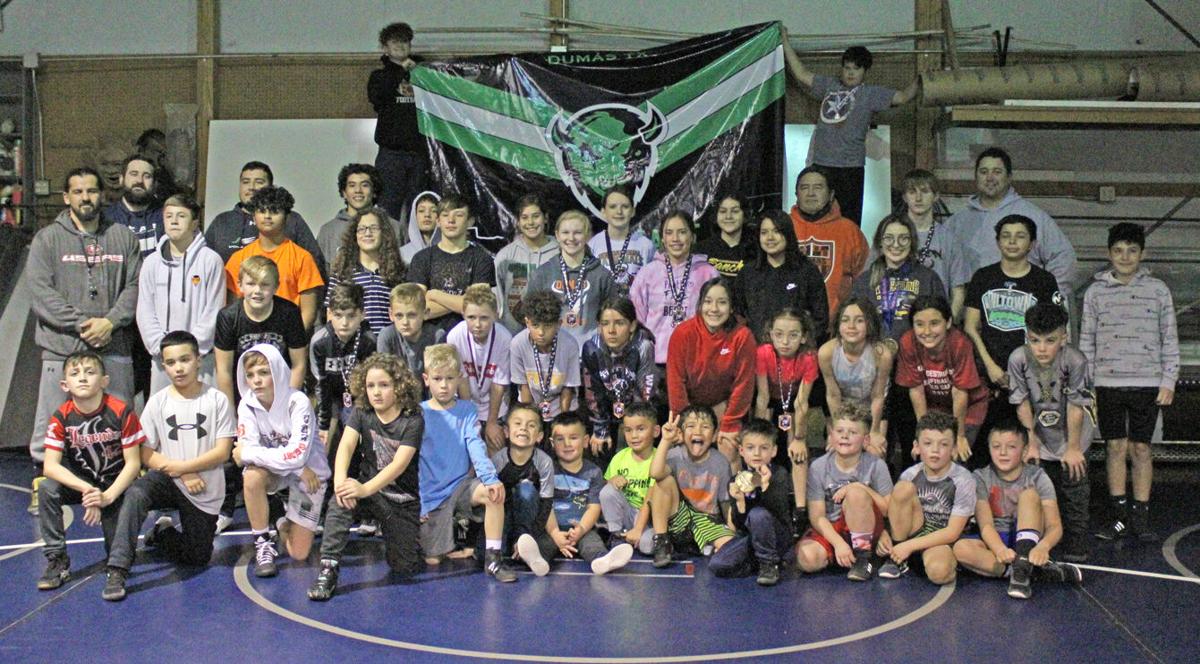 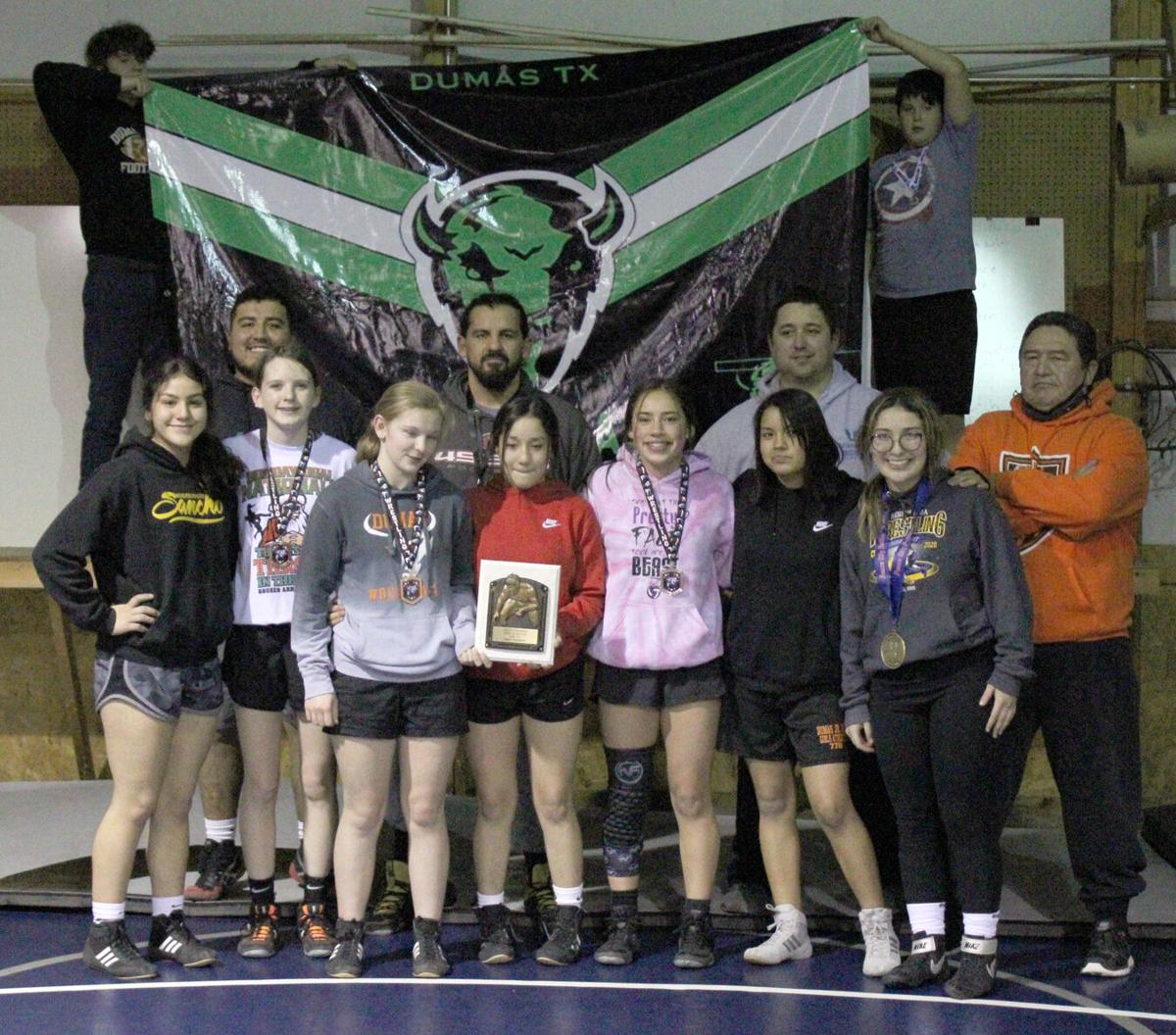 The 15 and under group that competed at a tournament in Blackwell, Oklahoma in late January and won the division.

The Standfast Wrestling Club practices. The club started a few months ago and already has 60 youths from four to 18 years of age signed up in the program.

When the pandemic hit last year, and as months went by with uncertainty, Jose Loya decided to do something about it and bring together a place where the youth of Dumas could compete and continue to wrestle. Together, with Jared Gonzalez, and Standfast Wrestling in Oklahoma, he did just that.

Loya has been coaching youth wrestling for several years. Most recently, he was with Maverick Elite in Amarillo.

“I’ve been coaching youth wrestling for about 16 years,” Loya said. “I’ve helped coach at Dumas youth, I was assistant coach at Young Guns Wrestling here in town. And then I went over Amarillo and we were part of Maverick Elite for three years.”

Loya was an assistant coach in Amarillo and they won a state championship as a team there.

Due to COVID and other things over the past year, they decided it would be good to bring something for the kids to do and give them another avenue to compete.

“And this year, this last year, with everything happening, all the uncertainties and everything, we decided to come back to Dumas and open up a gym here for the kids,” Loya said.

Loya and Gonzalez bought mats and necessary equipment to start up a new club and were able to acquire a place in which to practice. The group is just a few months old.

Loya and Gonzalez act as head coaches of the club, which has managed to have 60 kids signed up for the program from four years to 18 years of age. They have had much support from not only the public community, but the school community as well.

“We have, honestly, the whole community helping right now and it’s been awesome,” Loya said. “We have junior high, high school coaches, we got the support from them.”

Many high school wrestlers come out and help with the younger kids.

Although it is a young, first-year club, they have already been making waves in the youth wrestling world. The club competed at a tournament in Blackwell, Oklahoma in late January.

“We actually did very well as a team,” Loya said. “We took a really young dual team over there. They had a open bracket tournament, which we did very well.”

The 15 and under group won that division.

“My daughter, Emily Loya, actually got Outstanding Wrestler of the tournament of that division,” he said.

He said the dual team came in fourth place out of nine teams at the competition.

“We were arguably the youngest dual team there,” he said.    He is proud of the kids and what they have done so far. He said the kids are really competing and working hard.

In early January, the club competed at another tournament where the club won every division as a team except one, and went on to become team champions. There were 160 kids on the team and won by nearly 100 points.

Loya said there is help from Oklahoma, where several Division I wrestlers have come down to conduct camps for the kids. They have also had Mike Krause, who has been voted best youth clinician in the country, Loya stated. The Demon Booster Club assisted with bringing him down to do the camp. There were 105 kids registered.

“It’s unreal, the progress that these kids have made this year,” he said. “We got brand new kids that are first-year wrestlers all the way up to kids who have been wrestling two or three years who haven’t had a lot of successes.”

They are having success now.

He is invested in this as he also has a five-year-old son who wrestles. So he will be going for at least another 10 years.

“I love wrestling. That’s my passion,” he said. “… My goal is to bring Oklahoma caliber wrestling to Dumas and to this Panhandle area.”

He said they started a new dual team called Top of Texas Goats. With that, he hopes to include many areas in the Panhandle to help grow the sport of wrestling.

“The better everybody is, the better we’re going to be here,” he said.

Sometime down the road, if the club continues to grow, he will have to find another place to have more room. That is his hope. But for now, it’s just business as usual to keep growing wrestling in the area and bring more young athletes in.

The group has a big state tournament at the end of February.

“We have a really good potential to end up in the top four or five in the whole state as a first-year club,” he said.

Loya said the club will take some time off after the state tournament before continuing with competition. Through spring and summer, the club will begin freestyle wrestling in Oklahoma.

Other tournaments they have participated in have been in Wisconsin. He said he will be taking his team and the Top of Texas Goats to a huge national tournament in Kansas City. He also said several wrestlers were in Dallas recently at another national tournament.

The club has a Facebook page. Check out the page for more information.

“My goal as a head coach of a youth program is to sharpen our kids up and give them to the high school coach ready for him to … finish sculpting them out,” he said. “… The high school program here is unreal. The coaching that we have with him (Clint Chamblin) and his assistant coaches, it’s unmatched. I mean you don’t hear of very many programs, even in the state or out of state, that have as much help with wrestling.”