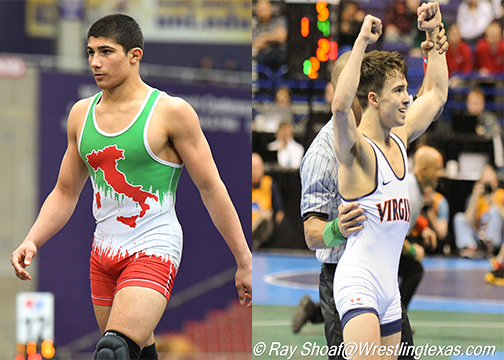 With 21 Texas entries to this weekends UWW Freestyle/Greco Cadet and U23 World Team Trials.  Aj Ferrari at 97kg makes the Cadet World Freestyle team by buzzing through the bracket. #4 nationally ranked Ferrari biggest match was in the semi finals against #6 nationally ranked Jacob Cardenas of New Jersey who he handled by decision 3-0.  Ferrari then won both matches in the best of 3 finals against Konner Doucet of Oklahoma.  Ferrari joins Oliver Pierce (2011), Jack Bass (2012), Bo Nickal (2013),  Ophir Bernstein (2013), Alex Liles (2015, 2017) as World Team members from Allen.   Anthony Ferrari makes the finals but an 8th grader wrestling a soon to be senior #9 nationally ranked Matthew Ramos  of Illinois  was a little to much.  Ferrari take the Silver losing his best of 3 matches.  The Decker brothers Parker and Preston both placed in the Cadet Greco division 5th and 6th.  Parker was a Pan-Am Greco champ last year, and runner up in Freestyle.

Jack Mueller at 57kg in the U23 division, formally University, Tech Falled all his opponents and didn’t give up any points except in the quarter finals to Hayes where Mueller won 8-5 making it to the finals.   Mueller then won the best of 3 against Rayvon Foley 8-6, and 10-0.

Below is how the rest of the Texas wrestlers did.