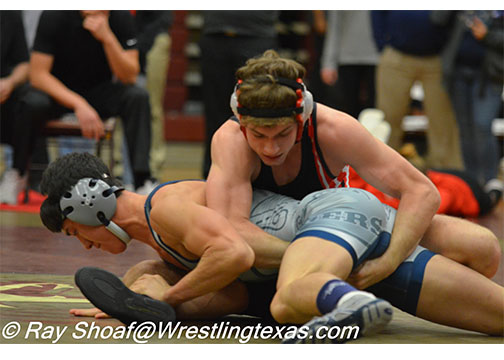 The Coyote Classic, held at Heritage High School in Frisco, lead up to some Classic top ranked wrestling in the lower weights yesterday. It had the top ranked wrestlers from 6A and 5A competing in the finals, as well as other ranked wrestlers.  Two teams from Austin  made the  journey up, Lake Travis and Austin Bowie. The rest of the teams were all from the DFW area featuring Frisco Liberty who won the tournament with 153 points,  Carrollton Creekview who has been on a winning surge as of late came in 2nd with 121.5. Keller High School took a 3rd place finish with 106.5.

106-To start the finals off we had #1 ranked and undefeated @ 106-6A Jordan Strmiska of Austin Lake Travis up against #5 ranked and undefeated @ 106-6A Preston Decker of Keller High School who beat #3 ranked @ 106-5A Tyler Bennan in the semi finals.  Strmiska with an escape in the 3rd period holds on to give Decker his first loss of the season.  1-0 decision. Brennan beats Steven Weatherall of The Colony for 3rd.

Then at 113 the other Decker brother  hits the stage. #3 ranked @ 113-6A Preston Decker avenges  his loss earlier in the season to #5 ranked @ 113-5A  Broderick Green of Liberty Frisco  by 2-1 decision in the semi finals to meet up with #2 ranked @ 120-6A Christian Moreno of Austin Bowie who beat #4 ranked @ 113-5A Juan Castellanos of The Colony in the semi finals.  With Decker giving up a penalty pt and an escape to Moreno, Moreno wins 2-0 decision.  Green beats Castellanos for the 3rd place finish and move around him in the rankings.

120 was a battle of 2 unranked 5A Frisco wrestlers, Manual Rangel of Frisco Heritiage meets up with Precious Essien of Frisco Liberty, Essien takes the win 11-6.

132 saw #3 ranked @ 132-5A Johnathon Green of Frisco Liberty pin his way into the finals against Jacob Foster of The Colony where he wins by major 12-0. 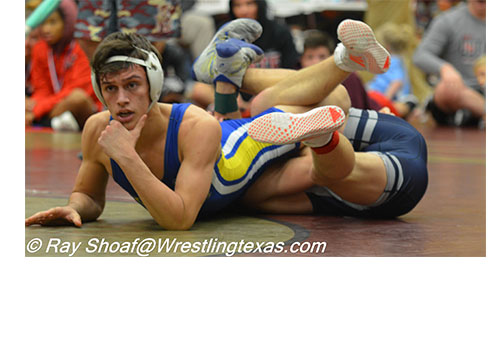 170-Samuel Simmerman of Frisco Heritage takes a victory over Mylin Mosley of McKinney North a 3-1 decision.

195-Interesting Bracket here.  #13 ranked @ 195-5A Michael Hoyt of Frisco Wakeland takes a loss on the top of the bracket to unranked 6A Julian Garcia of Coppell in the semi finals.  Garcia met unranked 5A  Chibuike Odo of Mckinney North who won the finals match 5-2.  The 3rd place finisher Hudson Schwartz and the 4th place finisher Donavan Amaya of The Colony and Dagan Myers of Creekview where all on the bottom side of the bracket.  safe to say I had 4 unranked guys below the radar.

Great Tournament by Coach Stevens and his Team