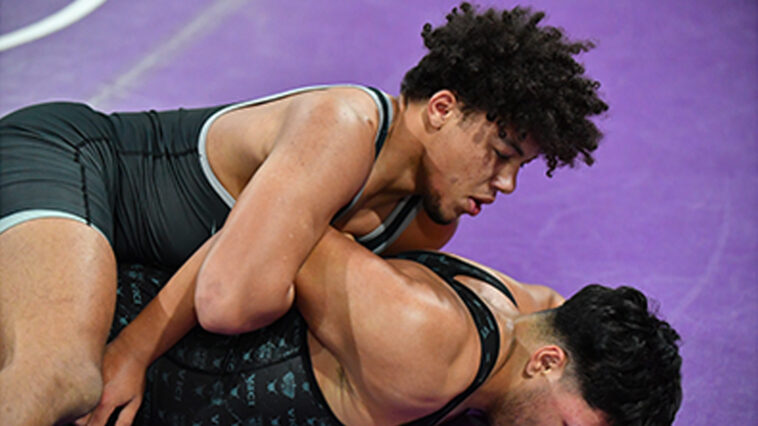 This years Lone Star Nationals held at NYTEX Sports Centre in North Richlands Hills (DFW) had all the usual youth battles but with High School wrestling about to kick off. The high school brackets had more of the top ranked wrestlers coming out of the shadows.  This recap will be all about the High School wrestlers.  Starting at 106 we go through each bracket and highlight.

120: Was the freshman spotlight weight.  Eli Biermann of Midlothian HS wrestling for Whitted Trained made his way to the finals meeting up with Finn Shepard another  freshman Whitted Trained wrestler.  Biermann came away with the championship with a 11-4 decision. Jack McDonald another freshman who has climbed his way up the rankings to the #6-6A spot claimed 3rd place after losing to Shepard in the quarter finals by a 13-2 major.  McDonald is a Northwest Nelson wrestler wrestling for Spartan Mat Club who also won the D5-120 pound championship.

132: Move in to Plano West, #3 Nationally ranked Troy Spratley  a junior wrestling for Texas Pride Wrestling club bumped up from 126 and made easy work with 4 falls to the finals including a finals win over #10-6A Donovan Fisher of San Antonio Churchill  wrestling for NB Elite with a 11-3 major.  Fisher takes 2nd.  Zarek Holly wrestling for Inochi Wrestling took 3rd. Holly is a senior for Comal Smithson Valley.

138: Rockwall Heath  standout Zaren Anderson wrestling for ETX Pace Wrestling Club increase his ranking this weekend by defeating in the semi finals #2-6A ranked Brady Earhart a Plano West wrestler wrestling for Texas Pride Wrestling Club..  Anderson went on to win over a New Mexico wrestler Tye Barker wrestling for El Paso Wildcats Club in the finals by a 4-2 decision.  Earhart comes back to take 3rd place and loses the challenge match to Barker for true 2nd 2-1.

145: #1-6A ranked Tagen Jamison of Plano West wrestling for Texas Pride bumps up a weight class to 145 and not only reels off 5 straight wins to win the championship.  Jamison does so by beating the current #1-6A wrestler DeShawn Cosby of Shertz Clemens High School wrestling for Ohana Wrestling Club by a major 16-8.  This secures the MOW for Jamison.  Daniel Countryman the current #14-6A ranked 145lb wrestler from Plano West loses to Cosby in the first match of the day and fights his way back through 7 matches to take 3rd place for Texas Pride Wrestling Club.

152: The #1-5A, Felix Saunders of Midlothian at 126 finally makes the wrestling debut since last season and this time at 152. Saunders got slowed little bit against #3-5A ranked Evan Atchley of Colleyville Heritage  in the semi finals but prevailed with a 5-0 decision. Saunders wins the championship by a 33 second fall over up and coming freshman Nicholas Dudzikowski of Comal Smithson Valley wrestling for NB Elite in the finals.  Atchley wrestling for Spartan Mat Club goes on to win 3rd place, then take true second from Dudzikowski.

170: This weight had the #1, #2, & #3 ranked 6A wrestlers in this bracket so let the fireworks began.  The #1 ranked wrestler Darwin Hull of Shertz Clemens High School wrestling for Ohana Wrestling Club met up with the #2 ranked wrestler Brian Pollard in the semi finals a 3rd place Texas state placer 2 years ago for Plano West who had moved back to Oklahoma last season and moved back for this season.  Pollard wrestling for Texas Pride wrestling club takes the semi final loss by a 10-4 decision. Things got heated during and after match and Pollard forfeits the remaining matches.  Hull then meets #3 ranked wrestler Abather Mounshed of Arlington Bowie wrestling for Mission Wrestling Club.  Hull gets by Mounshed by a 13-9 decision.  Hasnat Raza of Northwest Nelson with Spartan Mat Club takes 3rd place and challenges Mounshed for true 2nd with Mounshed prevailing by a 3-2 decision.

182: #2-6A ranked Farid Mobarak another Plano West state placer “2nd” had a smaller bracket but had no trouble winning his Lone Star Nationals Championship.  Mobarak wins by tech fall in the finals over Logan Mantezolo another Northwest Nelson and Spartan Mat Club wrestler.  Karsen Tompkins another up and coming freshman for Midlothian took 3rd for Whitted Trained.

On the Women’s high school side there was some notables.  The amount of women wrestlers were down so the brackets were smaller. Below are your Lone Star National Champs

95: Brenna Trang with All American Wrestling Club and Southlake HS won the 4 wrestler round robin here.

102: #2-6A ranked Eliana Martinez of Allen High School wrestling for All American Wrestling club prevails here as the champion.

110: Top 5A ranked wrestler Jasmine Howard is back in action after her last season back surgery which made her 3rd state finals run short last season.  IN 3 matches she wrestled a total of 1.35 minutes including a win over Tabiah Walwyn-Ton of Allen a top 10 ranked 6A wrestler.  Also Howard won the MOW for the high school women.

119: #2-6A ranked Sydney Harper of Euless Trinity and All American Wrestling Club dropped a weight from 128lb and won 4 straight matches to claim the Lone Star Nationals Championship here.

128: #3-6A ranked Jayden Bazemore of Cypress Ranch wrestling for Gracie Barra Westchase wins by 2ndperiod falls in all her matches to take the championship.

148: Freshman Jasmine Robinson of Allen is the real deal. Robinson wins the championship easily even over top ranked 5A freshman standout Avery Beckman.

165: #3-6A ranked Haley Wilcox of Euless Trinity and All American Wrestling Club wins another tournament here in a 5 wrestler round robin.

215: Amirah Wooden of All American Wrestling wins here in a 4 wrestler round robin.