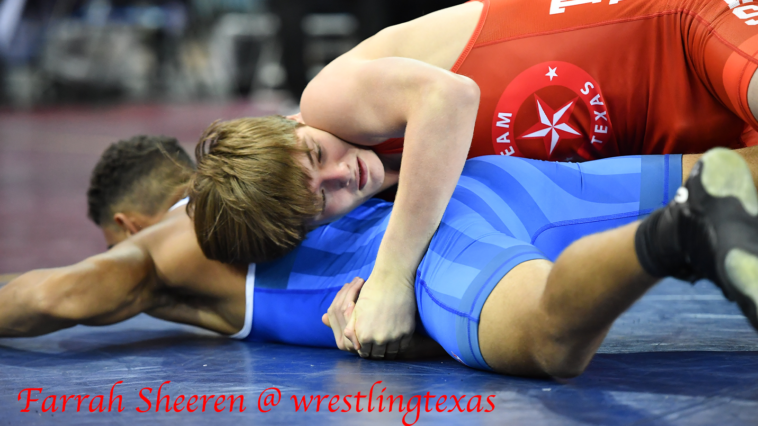 Day 5 in Fargo started the day off with the 16 Team Texas 16U Boys Greco Roman wrestlers but the highlight of the day was the girls finals.  The Junior Women had 2 champions and 7 other placers.  Jasmine Robinson at 152lbs claimed her 2nd National Championship and a 2nd Outstanding Wrestler which to my outstanding no girl has every been awarded both. Robinson never lasted past the first period and won by falls and pins in every match.   Brittyn Corbishley at 180lbs won her a National Championship and didn’t get out of the 1stperiod either and gave up no points in her pins, and techs including a tech over the former #1 national ranked wrestler. For more on the girls see the post story here. https://wrestlingtexas.com/texas-jr-women-nationals-all-american-finals/.

The 16U boys in the Greco Roman had a rough time early as most of the wrestlers didn’t make it to the afternoon session. Issac Sheeren at 170lb made it to the quarter finals but dropped the match there to send him to the consolation side where he was in the blood round needing one win for the All American status.  It didn’t happen leaving Sheeren 1 match away.  Bronson Baxter at 152lbs and Karson Tompkins at 182lbs both made it to within 2 matches from All American status before making their exit.  This makes the first time since 2001 that Team Texas Cadets/16U didn’t have a Greco Roman All American.

The Junior Greco Roman Boys will start at 9am Thursday