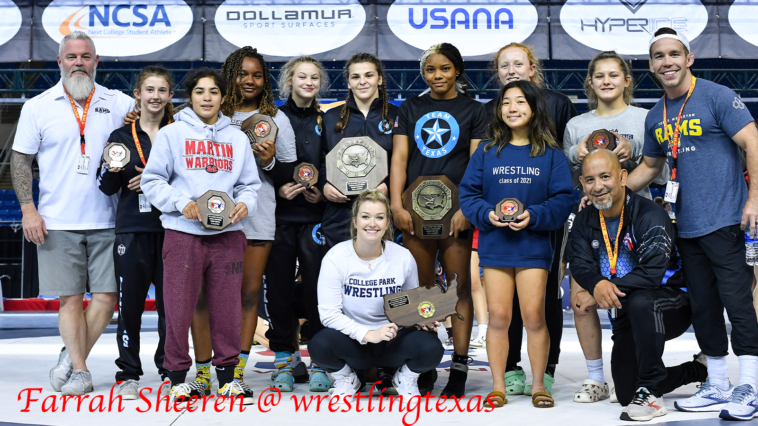 The Team Texas Junior Women have been rockin Fargo North Dakota.  Texas has 9 All Americans with 3 in the finals, 4 going for 3rd, 1 for 5th and 1 for 7th place.  BEFORE the finals Team Texas sits currently in 2ndplace at 117 points still with California running away with the team title with 197 points with 7 in the finals and 7 in the placement matches.  Oddly enough Texas doesn’t match up in any weights with California.  Washington is in 3rd place at 96 with 10 total All Americans.  Technically Washington could over take Texas if Texas lost every match and Washington won all of theirs.  Texas doesn’t have any matches with Washington either.

As the finals started Texas lost the first 4 matches in a row until Sandquist stopped the bleeding with her techfall.  Washington closed the gap to 10 point margin.  But, Robinson and Corbishley helped Texas secure the 2nd place Team Texas Finish with 132 points over Washington with 114.  California finishes with 214pts for 1st place.

Below we go through each All America and how they did.

Unranked @ 100lbs Kaycie Tanimoto a graduated senior faced off against #7 @ 100 nationally ranked Claire Booe of Florida for 7th place. Regardless of the outcome Tanimoto should be in the top 25 nationally after tomorrow.  However Tanimoto has to settle for 8th place as she loses to Booe 7-1.

#1 @ 112 Samara Chavez a graduated senior faced off against #1 @ 117 Sage Mortimer a graduated senior from Utah in the finals. FUN FACT: Both wrestlers are new recruits for King University and Chavez got the fall last time they wrestled.   Chavez starts out giving up points in the first period and in the 2nd period starts a comeback but it wasn’t enough and Chavez loses 12-7 to take 2nd place making the future team mates 1-1 against each other.

#7 @ 112 Avery Ashley a junior who dropped her 3rd match, came back strong with 5 wins and is facing off against #14 @ 112lbs Jenavi Alejandro of Nevada for 3rd place who just happens to be the wrestler to give Ashley her only loss thus far. Beating her 12-1.  #rematch.  Ashley drops the 3rd place match but bettered here score this time losing 14-5 for 4th place.

#25 @ 144 Aubrey Yauger a junior wrestling at 132lb dropped her semi finals match and came back strong in the consolations semi finals to win and faces off against Esther Han of Utah who is ranked #9 @ 144 for 3rdplace.  Both girls ranked at 144lb wrestling at 132lb. Han controlled the match the whole first period up 6-0 at the break.  In the 2nd period Yauger gets a takedown but that’s how the match would end. Yauger takes 4thplace.

#7 @ 138 Madison Sandquist a graduated senior drops her semi finals match and her consolation semi finals match to go for 5th place to face unranked Mariah Wahl of Montana. Sandquist came out on fire and gets 4 points right off the bat, then another takedown with 2 turns to take the 5th place finish in 1:04 with the tech fall 10-0.

#5 @ 152 Jasmine Robinson a freshman coming off her MOW and 16U National Championship is in the finals again looking for the 2nd stop sign.  Robinson faces off with #5 @ 164 Rose Cassioppi a sophomore of Illinois in the finals. This is where the fire works start, right off the whistle Robinson throws Cassioppi for a 5 point throw followed by a blast double then a regular takedown to claim her 2nd Stop Sign and also was awarded her 2nd MOW making her a double champ and double MOW.  Robinson had a total of five 5 point throws in the 2 tournaments.  Robinson also is only the 2nd Texas Girl to ever claim a double championship with the last one being Alex Liles in 2016

#2 @ 180 Brittyn Corbishley a graduated senior. One could say that her finals match was the semi finals match where she faced off with #1 @ 180 Jaycee Foeller of Missouri and teched her in the first period to spring board Corbishley into the 180lb finals. However Corbishley matched up with Taryn Martin of Ohio who was ranked #10 @ 164. Corbishley made quick work of her as well to claim her first ever Fargo Junior Nationals Championship after 3 All American placings in her high school career.

#2 @ 200 Hannah Francis a graduated senior wrestling at 225 who dropped her semi finals match and came back strong in the consolation semi finals faced off with #9 @ 225 Omastewin Foster a graduated senior of Montana for 3rd place.  Francis led 1-0 at the end of the 1st period.  Second period Foster even the score with a passivity point then Francis scored 5 more points to claim her 3rd place finish which betters 2019 5th place finish.