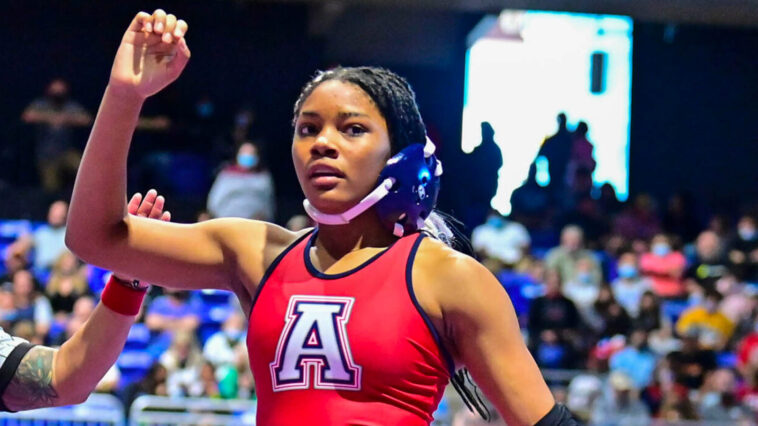 The sophomore-to-be at Allen passed her brother, Juwan, this summer thanks to two titles at the USMC Junior & 16U National Championships in Fargo, North Dakota in late July.

Robinson won the 16U crown and the Junior Women’s division with relative ease, no small feat given the breadth of talent that convenes to the FargoDome.

That gave her six, edging the mark of her brother, who won three state titles and a handful of national titles.

“Since seventh grade my goal was to beat his records and win more national championships,” she said.

Robinson posted a 6-0 mark in the Junior Women’s bracket, racking up tech falls and pins on her way to the crown and top spot on the podium.

Did she realize in all of her 10 matches, none went into the second period?

“No, it was crazy so I hadn’t really thought about it.”

The UIL Class 6A 148-pound champion – who went 20-0 this season with three straight first-period pins in the state tournament – showcased her talent by buzzsawing through the competition in both divisions.

She allowed only four points in all of her matches and that came a match she won by a pin – leading 12-4 at the time.

She beat Connecticut’s Ella Nichols, 12-0, in the semifinals and bested Illinois’ Rose Cassioppi, 11-0, in the junior finals.

The No. 5-ranked Robinson didn’t allow a single point in the 16U division.

She won by tech falls in three of the four matches and needed only 1 minute, 45 seconds to finish off the finals against Tennessee’s Genesis Gilmore.

“I expected it to be a lot harder than it was for me,” Robinson said. “I usually have to scramble in matches but throughout the tournament it wasn’t as hard as I anticipated it to be.”

“She’s done really well in the past but didn’t have a lot of big tournaments with COVID and everything,” Allen High School coach Jerry Best said of Robinson. “She just didn’t have the opportunities for things like that (last year).”

Best watched online and was impressed with Robinson’s confidence to go out and end matches quickly.

“She is wrestling really good right now,” Best said. “She won both Cadet and Juniors … to do both is unheard of. We expect great things of her and she expects it too. When kids have self-motivation, everything else comes a lot easier.”

She hopes to return to Fargo the next few years in high school. There is a chance to rack up more All-American honors to add to her resume.

For Robinson, it was more than just another wrestling tournament.

“It was more getting to meet new people and new coaches and hear older girls and the stories of what they have been through and how they got there,” Robinson said. “It is a big experience, just personally, too.”

Robinson didn’t start wrestling until seventh grade and quickly picked up on the sport after ditching gymnastics and track and field.

This summer she went 6-0 at the Junior Nationals in Tulsa and took third at the UWW Cadet Nationals – bouncing back from a rare loss — after falling to California’s Amit Elor, the eventual champion, in the semifinals.

She noted she has gotten a lot of publicity from her success in Fargo, but that is in the past. Robinson has now turned her focus on FloWrestling’s Who’s No. 1 Tournament that is scheduled for Sept. 17-18 at a location to be determined.

After that, the next goal for Robinson is to try to get closer to her brother’s mark of three state titles, which he won in 2015, 2017 and 2018 before heading off to wrestle for Old Dominion.

With one under her belt, the start for No. 2 begins.

She knows the target will be on her back.

“I know these girls will study anything and everything I do,” she said. “I love the competition … it drives me.”

Added Best, “She will do fine. We have a target on our back anywhere we go and we have had for a long time. They know what it is like to do it with a little pressure, whether they are boys or girls, it stays the same here in Allen.”