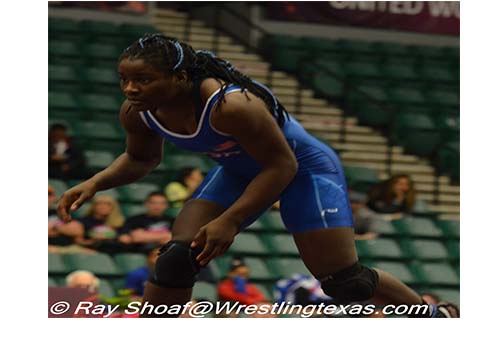 Tamyra Mensah of the USA and National Women’s Coach Terry Steiner on the top of the podium for 69 kg at the Ivan Yarygin Grand Prix in Russia. Photo courtesy of Terry Steiner.

KRASNOYARSK, Russia – Tamyra Mensah (Katy, Texas/Titan Mercury WC) won a gold medal at 69 kg/152 lbs. on the first day of the respected Ivan Yarygin Grand Prix on Friday.
Mensah looked strong in the gold-medal finals, defeating three-time World bronze medalist Nasanburmaa Ochirbat of Mongolia, 8-4. Trailing 2-0, Mensah scored a four-point takedown in the first period to lead 4-2 at the break. In the second period, Mensah added a pair of takedowns to stretch her lead, and a last second Ochirbat takedown was not enough.
Mensah becomes only the sixth U.S. woman to have ever won this event. The last U.S. woman to win the tournament was Kelsey Campbell in 2010 at 59 kg/121 lbs. Two-time World bronze medalist Sally Roberts is the only U.S. woman to have won the Yarygin twice.
“Tamyra had a good tournament. She wasn’t reckless. She was in control of situation and thinking things through a little bit more. She knew where she was on the mat. It was a good day and a good win. The Mongolian girl she beat in the finals has been around a long time. They were all good matches for Tamyra,” said National Women’s Coach Terry Steiner.
Mensah opened with a 3-1 win over Elis Manolova of Azerbaijan, scoring a takedown late in the match for the victory. In the quarterfinals, she dominated Asian Junior bronze medalist Tsetsegbayar Byambadorj of Mongolia in a 10-0 technical fall. She won a wild 9-8 semifinal match over 2016 Cadet World champion Khanum Velieva of Russia, coming back from a 7-6 deficit late with a takedown followed by a step-out point.
Mensah was a 2016 U.S. Olympic Trials champion, but her weight class did not get qualified for the Olympic Games. She was a 2017 U.S. Open runner-up. She is a WCWA college national champion for Wayland Baptist, competing in her senior season this year.
Ragan, a 2016 World silver medalist, won a bronze medal at her new weight class, 60 kg/132 lbs. In the bronze-medal bout, Ragan scored a pin over 2016 University World bronze medalist Tsorigt Bolortungalag of Mongolia in 4:15. Ragan scored three takedowns for a 6-0 lead, and when Bolortungalag tried to press the action in the second period, Ragan nailed a hiptoss and finished it for the fall.
Ragan was defeated in her opening bout by 2016 European bronze medalist Yuliya Prontsevich of Russia, 6-2. Prontsevich opened with a four-point takedown and a two-point tilt for a 6-0 lead, and Ragan was only able to secure one takedown the rest of the bout.
When Prontsevich reached the finals, Ragan was pulled back into repechage, where she shut out Valeria Suvorova of Russia, 5-0.
“Alli had Prontsevich in the first round, who had won this tournament last year. We were racing too much in that first match. She needed to slow it down a little more. She did a good job coming back strong. She was staying more relaxed in her other matches,” Steiner said.
Ragan has competed on four U.S. World Teams for the United States, three at 58 kg/128 lbs. She is also a two-time Junior World bronze medalist, and a two-time WCWA college national champion for King University.
2013 World Team member Victoria Anthony (Tempe, Ariz./Sunkist Kids) finished in ninth place at 48 kg/105.5 lbs. with a 1-1 record. She opened the tournament with a pin over Luiza Suleimanova of Russia in 2:58 after dominating the bout from the opening whistle. In the second round, she was edged by 2011 Junior World champion and 2013 Yarygin champion Valeria Chepsarakova of Russia, 4-3. Chepsarakova broke a 2-2 tie in the second period with a takedown and held on for the win. When Chepsarakova was beaten in the semifinals, Anthony was not eligible for repechage.
“The bracket sizes were good and this is a very good tournament. In addition to all of the tough Russians, there are athletes from Japan, Mongolia, Kyrgyzstan, Kazakhstan and other top nations. There are a lot of tough teams here,” said Steiner.
Yarygin Memorial gold medalists from the USA in women’s freestyle
2004 – Tela O’Donnell (121); 2004 – Iris Smith (158.2); 2005 – Sally Roberts (130); 2006 – Marcie Van Dusen (130); 2008 – Sally Roberts (130); 2010 – Kelsey Campbell (121); 2017 – Tamyra Mensah (152)
IVAN YARYGIN GRAND PRIX
At Krasnoyarsk, Russia,
Women’s freestyle results
48 kg/105.5 lbs.
Gold – Yui Sasaki (Japan)
Silver – Daria Leksina (Russia)
Bronze – Milana Dadasheva (Russia)
Bronze – Miglena Sekiushka (Bulgaria)
5th – Valeria Chepsarakova (Russia)
5th – Nadezhda Sokolova (Russia)
58 kg/128 lbs.
Gold – Aisuluu Tynybekova (Kyrgyzstan)
Silver – Veronika Chumikova (Russia)
Bronze – Gantuya Enkhbat (Mongolia)
Bronze – Akie Hanai (Japan)
5th – Maria Matyushenko (Russia)
5th – Ulyana Tukurenova (Russia)
60 kg/132 lbs.
Gold – Katsuki Sakagami (Japan)
Silver – Yulia Prontsevich (Russia)
Bronze – Alli Ragan (USA)
Bronze – Zhargalma Tsyrenova (Russia)
5th – Tsorigt Bolortungalag (Mongolia)
5th – Shoovdor Baatarjav (Mongolia)
69 kg/152 lbs.
Gold – Tamyra Mensah (USA)
Silver – Nasanburmaa Ochirbat (Mongolia)
Bronze – Elis Manolova (Azerbaijan)
Bronze – Tumentsetseg Sharkhuu (Mongolia)
5th – Khanum Velieva (Russia)
5th – Ksenia Burakova (Russia)
U.S. women’s freestyle results