As we put a cap on the 2019/2020 UIL Folkstyle season with the conclusion of the state tournament we have 100’s of stories that will fill out the coming weeks.

with 6 state placers and the other 3 wrestlers lost in the blood round one match away from placing and they double the 2nd place team score.   Although Allen may be down a smidgen this year they only lose 4 seniors and the young guys coming in can’t wait for their shot.  Allen wins the title with 203.5 points over Arlington Martin with 100 points even.  Martin had 2 champs in a team that whittled with bad luck this year losing 3 state placers might of gave Allen a closer battle.  Katy with 1 state champ squeaks out a 3rd place finish over Plano West 94 to 83 and only 2 points over College Park at 81 to round out the top 5 teams. 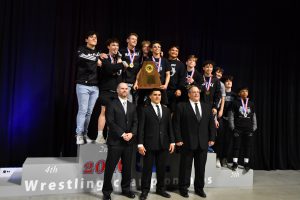 In 5A boys it was Canyon Randall collecting their 2 consecutive state title.  It was a much closer race at the end of Day 1 then the 6A boys were but at the end of day 2 Randall had almost double the 2nd place team Midlothian in score.  Randall had 2 state champs and 5 placers to end the day with 146 points.  Midlothian squeaks in for a 2nd place finish over Carrollton Creekview 77 to 75.5.  Lubbock who now has a 3x state champ placed 4th with 71 points.  Frisco Centennial who was in 2nd place at the beginning of day 2 fell to 5th place 64.5 only 1/2 point over Cedar park and Dumas who both tied with 64 points. 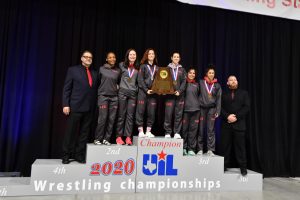 lot of state placers in which they did with 4.  Katy Tompkins were in position to win the team title earlier in the day but Trinity out lasted them.  Tompkins had only 1 state champ with 2 placers.  Trinity 88 to Tompkins 75.  College Park did have 2 champions and came in 3rd place over Plano West who also had 2 champions as well 72-63. 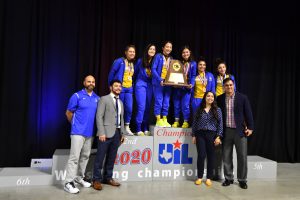 5A girls team race was down to the finals matches with El Paso Eastwood 1/2 point over El Paso Hanks going for their 7 consecutive state title.  Things went Eastwoods way and head coach Troy Douglas wins his first state title as a head coach and coach of the year award with girls 125.5 over Hanks 116 win.  The rest of the pack was about half of the score with Amarillo Caprock coming in at 3rd place with 60, Dallas Kimball coming in 4th at 54 having 1 champ.  Northwest finishes 5th