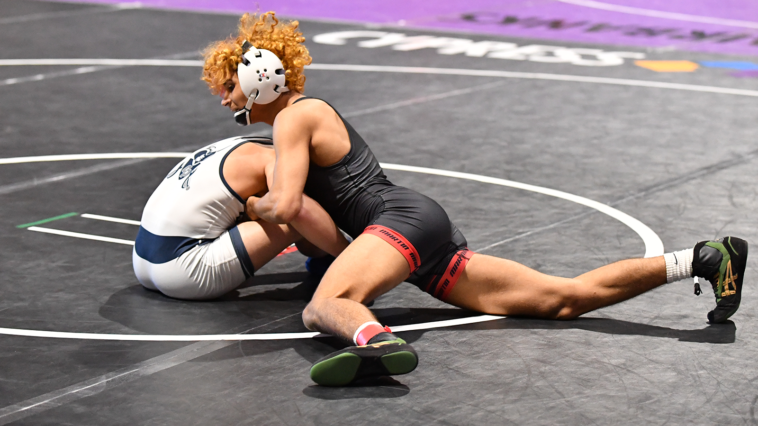 This weekend and into the Thanksgiving Holiday break, Texas has 16 tournaments throughout the state, at least the ones listed on track, some of the areas in the panhandle and in the valley still go old school using hand written brackets.  This weekend’s tournaments unlike last weekend that kicked off the season, a lot of the teams will be traveling across the state. But here goes the list and a breakdown of the tournaments to keep an eye on in the high school division.

The Warrior Invitational an Arlington Martin tournament is one of the toughest in the state especially being so early in the DFW area.  It will start out this Friday morning with the Junior Varsity wrestlers and then into the girls and the varsity boys concluding on Saturday.  This tournament has 21 boys’ teams registered of every variety with 5A, 6A, and Prep teams.  Airline HS out of Louisiana will make their annual trip along with College Park HS and Clear Lake HS from the Houston area.  Coronado HS, Pebble Hills HS, and  Franklin HS make the trip all the way from El Paso.  Should be a great team race, can College Park win against the host team Arlington Martin whom has won its own tournament for as long as I can remember?  Wrestlingtexas will be catching the action on Saturday.  https://www.phlox.photo/event/11-20-arlington-martin-warrior-invite-arlington-martin-wrestling-varsity/.

12th Annual Heath Invitational in Rockwall-Heath another DFW area tournament starting this Friday featuring JV, boys and girls with 22 teams registered, but according to track wrestling their seems to be a few of the same teams attending as the Warrior tournament like Midlothian, Whitehouse, and Clear Lake HS so we will see who attends.  The tournament will feature 5A, 6A and Prep HS. The heavy hitters will be home team 6A Rockwall-Heath HS and 5A Midlothian HS, Lovejoy HS, and  Grapevine HS.  We will also get to see Prep schools Bishop Lynch and St Marks.  I think Rockwall Heath boys win the team title with the home mat advantage.

19th Annual Cypress Ridge Classic at Cypress Ridge HS in Houston area looks to be a 30 team tournament featuring all Houston area teams and of course all the Cypress HS’s along with all the Conroe HS’s, Katy HS’s and Klein HS’s. A Friday and Saturday boys and girls tournament with Junior Varisty.  A lot of these teams all have one or 2 ranked wrestlers so it will be interesting to see the new wrestlers make the scene.  I would have to choose Cypress Woods HS boys to take the team race here with a full team registered.  Photograghers will be catching the Action here also.  https://www.phlox.photo/event/11-20-cy-ridge-classic-cy-ridge-wrestling-varsity/

Capital Classic 2021 at Bowie High School in Austin will be another 30 team tournament this weekend with boys and girls with all teams, from Austin and surrounding areas with a mixture of 5A and 6A schools.  Like the Cypress tournament just about every team has a top ranked wrestler.  Killeen Ellison HS has a great chance of taking the boys and the girls team race here.

Marcus Thanksgiving Clash being held in Flowermound a DFW area event being hosted by Flowermound Marcus HS is a 12 team dual with a mixture of 5A and 6A team from the DFW area.  Southlake is the big 6A team while Burleson Centennial, Highland Park, and the Colony are the big 5A teams.  Southlake Carroll’s depth might be hard to get around here.

2021 Charger Classic tournament being held at Churchill HS in San Antonio area is a 24-team tournament of boys and girls with the junior varsity.  This tournament is a mixture of 5A and 6A schools with 4 teams Americas, Austin, Jefferson, and El Paso HS from El Paso making the trip over.  5 of the Corpus Christi schools, 6 of the San Antonio schools, and some Austin area schools.  Corpus Christi Moody and Dripping Springs have the most ranked wrestlers however all the schools have the potential to get a team win.

Talon Tournament hosted by Northwest Eaton high school  in the Ft Worth side of DFW area is an 18 team tournament mostly 5A teams with a few 6A teams in the mix with boys, girls and junior varsity.  Some of the Dallas high schools are going across the metroplex along with a couple of Frisco schools.  Frisco Lebanon Trail has the most top ranked wrestlers here with a good mixture from the other schools.  Saginaw appears to be bringing the most wrestlers so be interesting to see the outcome.

Lady Cougar Duals being held at The Colony high school in the DFW area is a 16 team all women dual with a mixture of the 5A and 6A teams here.  Burleson Centennial would be the favorite here but Keller Central and Bryan Nelson have some top ranked girls.

Kaizen Tournament being held at Montwood high school in El Paso also being called the Montwood Madness.  No info on track wresting as of Thursday so hopefully the results will be posted

4th Annual Carlos Molina Invite being hosted by Houston Northside in the Houston area is mostly all the 5A school from the Houston area with Episcopal Prep making an appearance in the 16 team tournament.  College Station A&M and Huntsville are the out of town teams.  Both boys and girls will be happening with the junior varsity as well.

Richardson Roundup being held at Richardson High School is another 18 team tournament with boys and girls with their junior varsity in the DFW area.  More Dallas schools here and a mizture of the 5A and 6A schools.  This tournament will have a few of the new wrestling teams like Frisco Emerson and Little Elm high schools with some teams and new coaches like Melissa high school with Oliver Pierce.

Wishbone Classic another small 7 team tournament in Austin area being hosted by Austin Vandegrift high school with the local school in attendance.  This is during Thanksgiving break.

JV Snakebite being held at Rio Grande City high school down in the valley will be a 10 team tournament of boys and girls during the Thanksgiving break.

Pre Turkey Day Tango being held at Tascosa High School in the Amarillo area featuring all girls in 15 teams from the panhandle area with some heavy hitting teams registered like Caprock, Randall, Dumas and the Lubbock teams.  Could be a preview of the 5A girls state race.  This is scheduled to go down on  Thanksgiving Day.

La Joya Turkey Tournament being held down in the valley in La Joya is a larger 17 team tournament of boys and girls from the valley area, actually looks like every team in the south is registered.  Should be a great showcase of what the south has to offer.  This will be held the day before Thanksgiving.