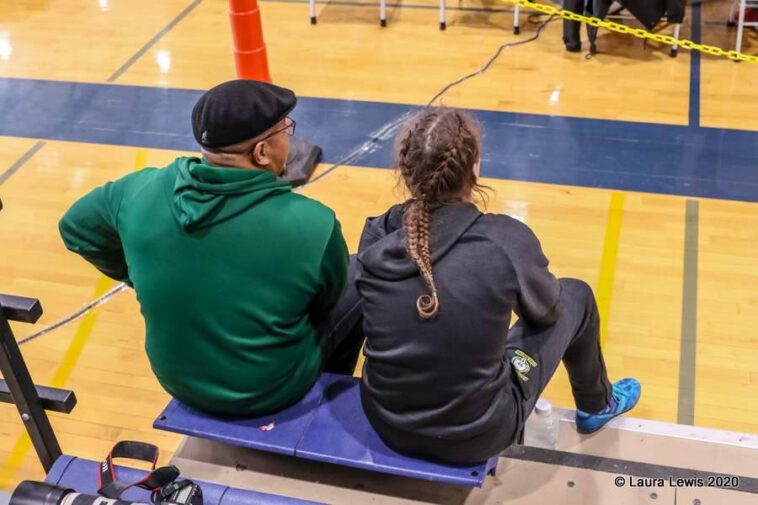 In reality, there are several different facets of the wrestling community. There are family, friends, and fans of the sport. There are wrestlers from the past, those who paved the way for the sport – some still living, some who made their exit from this world long ago. And of course, I find it important to highlight another aspect of this community: mentors.

Shortly after winning a state championship my freshman year, Rickey Williams decided to mentor me. Rickey was a three-time state champion from Oak Park, as well as a two-time NAIA national champion when he competed in college.

When Rickey was in high school, he (like me) had also won a state championship as a freshman. However, he failed his sophomore year to reach the top of the podium again. Sitting up on the wall of Oak Park’s gymnasium is a large banner adorned with the names of state champions from all sports. Rickey pointed out that there were a handful of three-time state champion wrestlers listed on the banner, and for some of them, it was their sophomore campaign that ended in disappointment. Rickey didn’t want that to be me. “I know your initial thought following a state championship as a freshman is to relax and enjoy some time off to reflect on what you have accomplished this past season,” he said. “But if you don’t want to be added to the list of sophomores who failed to reach the top of the podium again, the time off needs to be brief. I want to work with you right away. Let’s start training now for next season.”

The high school wrestling season ends a little earlier than the youth season, so my younger brothers were still in the midst of competing. Rickey and I would arrive at the youth tournaments extra early on the weekends in order to utilize the open mats for training in addition to training during the week. He helped refine my technique, and he took every opportunity possible to provide me with competitive wisdom. He had the experience. He had already been through it all. And he had both succeeded and failed. Rickey knew some significant aspects of the journey that lie ahead of me. So it was my job to listen and take seriously the wisdom he sought to deliver.

I wish I could tell you that I fully consumed his help and wisdom. But unfortunately I was still somewhat immature and couldn’t recognize just how influential his mentorship of me truly was. Also, I left Oak Park late that summer and moved with my family to Apple Valley, Minnesota. Rickey was the last person who put forth effort to mentor me in the sport. No one after him took the time to delve into my life as a competitor, and I in turn did not take the time to seek out any mentors.

Wrestling is a gift, and so are mentors. When you obtain a relationship with a veteran of the sport who is willing to help make you a better wrestler, you’re being offered a valuable gift that you must take full advantage of. They have experienced what you have yet to. They’ve identified the challenges that lie ahead. They’ve succeeded and failed. And they’ve had the necessary time to discern and reflect on their successes and failures as well as their own wrestling abilities in order to know what works and what doesn’t.

What’s more is that your mentor has a mission. That is, many former wrestlers contain a desire to give back to the sport, to not only impact the lives of current wrestlers but to ultimately make the sport better. And part of this mission involves delivering their knowledge and experience as effectively as possible. I mentioned before (in a previous article) that it is the job of every wrestler to grow the sport. Well, this includes consuming the knowledge and experience of available mentors. They know what you don’t! So current wrestlers and their mentors can work together, and they should. Simply put, to be innovators in the sport of wrestling, we have to know the sport and all the elements infused in it.

So if a mentor has not made themselves available to you, go find one! You don’t have to wait for a mentor to come to you.

I’ll let you in on a little secret: people want to help. People are usually ready and willing to help those who ask for it, especially when you’re asking for help regarding something they value as much as you do. If a veteran of the sport is still hanging around a wrestling room, or if they still keep themselves in tune or involved with the sport in some way, then that means they still value it. As the saying goes, “ask and you shall receive.” But if you don’t take the time to ask, or if you simply wait for a mentor to come to you, you will miss an important opportunity to learn and grow.