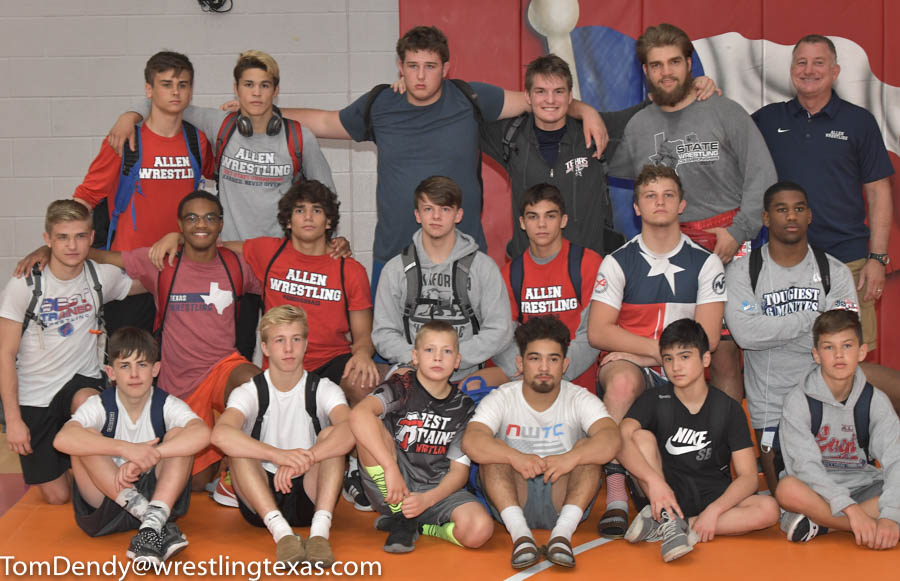 When the day 2 Gold Group round robin pairings were posted, it seemed that the fate of the championship might well be determined in the second round matchup between 2016 winner Best Trained and 2017 Champion Team USA Dynamite.  Best Trained, with a roster comprised mainly of Allen High School wrestlers, had a bye in the first round, coming in fresh against the USA Dynamite roster featuring a large contingent of Arlington Martin athletes.

True to form, the dual was back and forth, featuring some great match-ups and a few surprises. At 125 lbs, Martin’s Luke Garcia, last year’s 3rd place finisher at 120lb (6A) handily defeated Allen’s Gabe Martinez, the 113lb (6A) state runner-up from Allen.  In an even bigger surprise at 152lb, Martin’s Carpenter defeated defending 138lb State Champion Trent Dooley.  Two bouts later, at 175-lb, we saw a rematch of the 170-lb state Championship final as Allen’s Braden Redlin defeated the always flamboyant Adam Kilgore of Martin.  When Allen’s Nate Dooley pinned Martin’s Max Soto at 205lb, the score was tied 27-27 with only the 285-lb wrestlers remaining. The final bout featured California Greco Champion David Aranda (Brentwood, CA) against Sophomore Jordan Trout.  With a second period pin, Aranda secured the dual for Team USA Dynamite 33-27, and a seemingly clear path to the team title.

In round 4 of the 7 round bracket – things imploded for USA Dynamite against Team Kansas Gold, who had dropped a their round 3 dual to Best Trained 37-28.  When Aranda defeated Cole Edwards of Kansas in the 285-lb match, the scoreboard should USA Dynamite ahead 31-30, however, three team penalty points shifted the score to Kansas 30, USA Dynamite 28.

With all three teams winning out, the tournament ended in a three way tie between Kansas, Dynamite and Best Trained. Dynamite’s penalties dropped them from a sure win to third place with Best Trained taking the tournament on point criteria.

Choctaw defeated Miami Elite in the final round to win the silver pool and Kansas’ Blue Valley SW ran the tables in the second day to take the Bronze Pool.