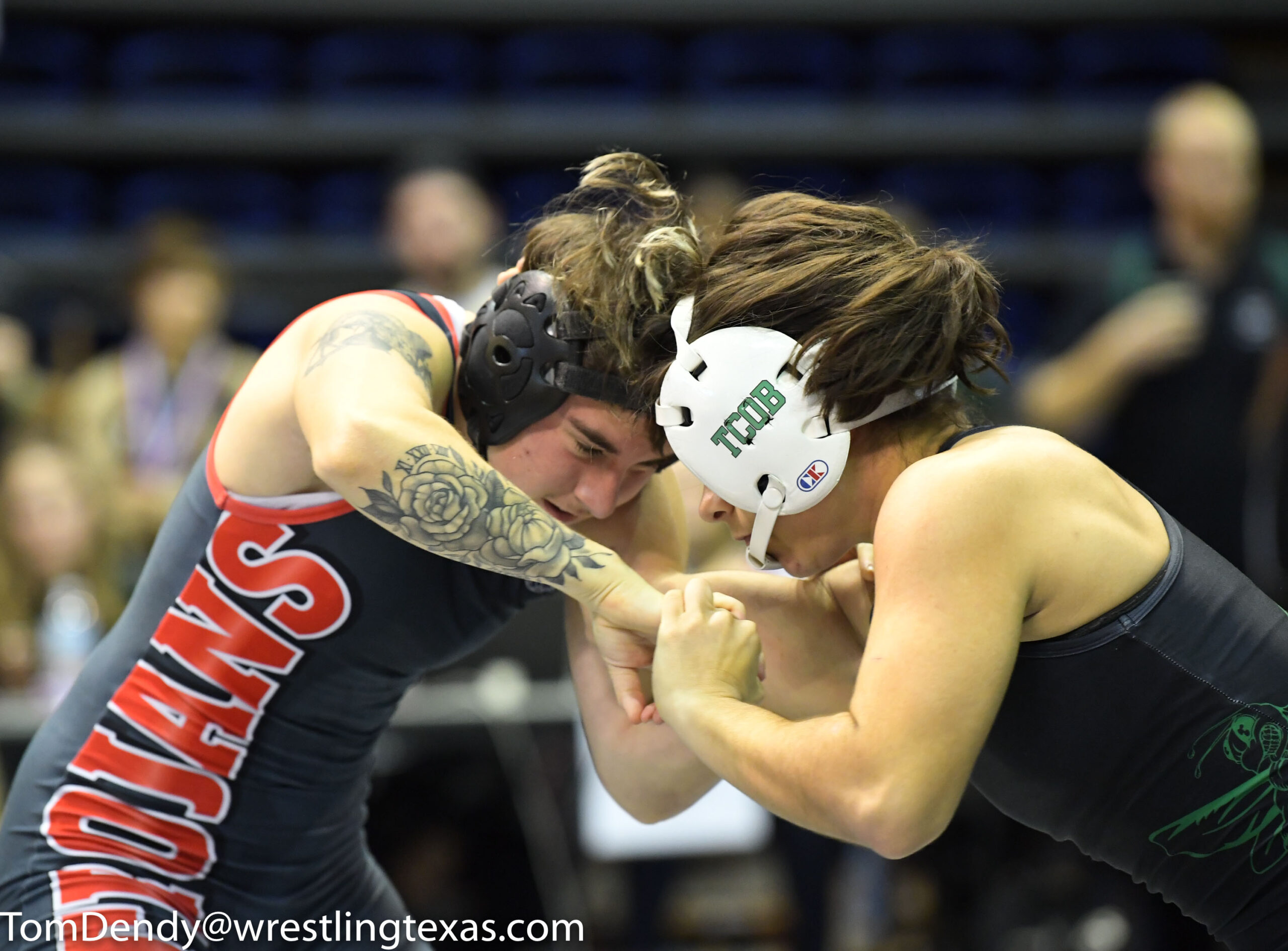 Despite some notable top-ranked absences (weight-busters) and no-shows, the 16th Annual CFISD Invitational girls tournament once again lived up to its reputation as the biggest and toughest of the UIL season.  Keller Timber Creek showed up with a full 10-woman roster, and they all contributed to the 184.0 team points and tournament title, with six individual medals and one individual champion.  Cy Ranch got solid production from their partial roster of 7 wrestlers, scoring 156.5 points with three finalists and one individual champion, picking up the second place team trophy. Looking at the individual brackets:

We were anticipating some competitive matches with the top two 6A 102 pounders moving down to join the party with 6A #1 Esthella Trevino. As it turns out, Trevino apparently did her partying in Colorado during the holiday break, and couldn’t quite make it back to 95 pounds by Friday morning’s weigh-ins, missing it by about a quarter pounder.  McNichols handed Howard her first loss of the year in the finals, 6-2. Timber Creek’s Chalimarys Rodriguez takes third on 5-match rule forfeit in the final.

Camille Fournier moved down from her top perch at 110lb and has officially staked her claim on the 102lb class, defeating 2nd ranked Banas 10-5. Messer protects her #3 ranking with a 3rd place finish, by 5-match rule over Foster’s Valerie Carreon.

With Fournier moving down, second ranked Kayla Fitts of Cy Ranch defended her de facto top ranking by defeating third ranked Chelsea Sanchez of Morton Ranch. Annamarie Crixell of Oak Ridge should move from 4th to 3rd in the rankings with her third place win over 7th ranked Carmen Allred of Trinity.  Could we have the state’s top 3 finishers coming out of Region 3 next month?

With top ranked 6A Xochitl Mota-Pettis not competing, we saw a re-match of last year’s 110lb final, both wrestlers defending a state title.  It was a relief the see the absence of the sensationalist media circus that swarmed the Berry Center during the UIL State tournament last year, they have left Mack alone this year allowing him to focus on wrestling.  And every bit of that focus was needed in the most competitive, aggressive and exciting match of the finals, as the two defending champs kept the crowd entertained for three full periods.  Beggs picked up a 3-2 win in a match that could have gone either way.  Unless Mota-Pettis stays at 119, this might have been the last major challenge Mack sees all year.

In another potential State preview (assuming rumors of Liles and DeLeon moving down to 128 are not true), the finals match featured 1 v 2, as McAllen’s Serena Cervantes got by Cy Fair’s Jasmine Hernandez 3-2. 5A #2 Jacqueline Ghent of CC Veterans picks up third over Dallorie Miller.

There was a bit of a void at 138lb without former state champion Kayla DeLeon, and the void got even bigger on day two of the tournament when current #[email protected] (6A) Hunter Robinson failed to make weight, forfeiting her quarter finals match. While Robinson, a junior, would like nothing more than to have another shot at seniors DeLeon and Liles – it they both move to 128lb, as is rumored, Hunter can probably accomplish more staying at her natural 148 weight class. Fourth ranked (6A) Jordan Suarez cruised to the gold medal with a second period pin of 5A third ranked Eileen Webb of Victoria West. Katy’s Mhina Oseitutu and Cy Ranch’s Madison Guinn are both poised to move up the charts finishing 3rd and 4th, there was no 3rd place match due to the 5-match rule.

Well, we got the #1 v #2 match-up we anticipated, it just wasn’t in the finals. 6A #1 Augustina Ijoma of Cy Falls pinned her way through the bracket, including her semi-final won over #2 5A Adrena Carter of Northwest. Ijoma then defeated 6A #9 Emily Manzazrez, 5-1 in the finals. Augustina also won the coaches’ vote as Most Outstanding Wrestler.

In our anticipated battle of state #2’s, 6A Jackie Mote of Rockwall defeated  5A Kacie Rodriguez of CC Moody, giving Kacie her first loss of the year. Imani Smith of Cy Springs finished third, defeating Sydny Fenus of Weatherford.