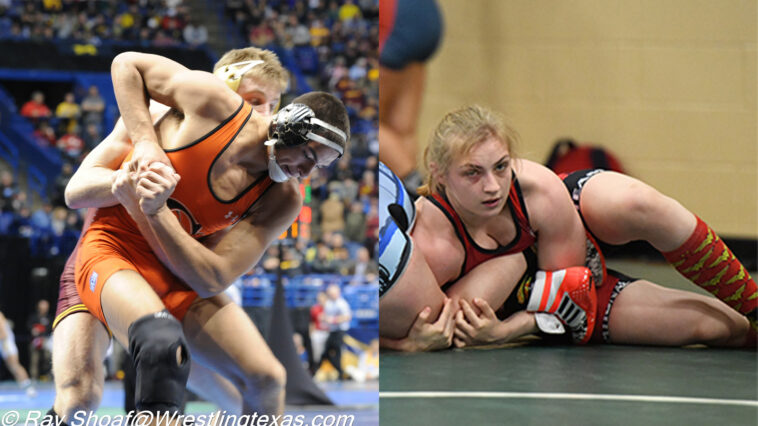 The 2021 Last Chance Qualifiers wrapped up in Fargo today and 3 Texas wrestlers placed 1st joining the other 24 wrestlers who qualified to compete at the World Team Trials in September on Labor Day Weekend. One had to win the title to qualify and is the last chance to earn a spot thus the name.

Quentin Perez a 2x Texas State Champ from Arlington and Campbell University, Quentin Perez now wrestling for Navy-Marine Corps Mat Club not only wins the Freestyle division but also the Greco Roman Division. The Greco Roman division had 5 rounds in the Round Robin and Perez ran the course pinning and tech-falling all 4 of his opponents in the 77kg weight. In the Freestyle weight at 76kg, Perez only had to wrestle 2 matches the way the brackets were set, however it didn’t matter as Perez won by tech-fall in the first period of both giving Perez a double qualifying day in both styles.

Keaton Fanning a Euless Trinity Alumn and Northern Michigan University standout won his title at the 130kg in the Greco Roman division. Fanning as been wrestling Greco Roman internationally now since 2017 placing in various tournaments at the 87kg and has recently just bumped up to the 130kg to qualify for the World Team Trials.

Last but not least Hunter Robinson the State Champ from The Woodlands College Park and Grand View University standout was the only wrestler in the women’s division that actually had to wrestle to earn her spot. Robinson won over Taryn Martin of Ohio in 2 consecutive matches to earn her qualifying spot at the 76kg.