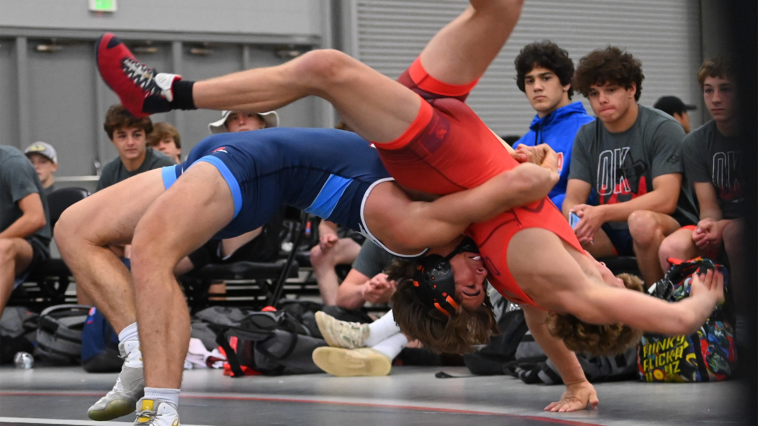 Photo is Jarrett Stoner with a 5 point throw, BY: Farrah Sheeren of Phlox Photography

Texas had 2 Greco Roman Teams. 24 states are being represented with 32 teams total. Texas A Team with 15 wrestlers was the strongest team with the most ranked wrestlers. Texas B Team had 21 wrestlers but was lacking champs or ranked wrestlers. Texas A Team finished 14th overall while Texas B Team finished 26th. Connor Timmons was the only wrestler to finish undefeated at 3-0, but not enough matches to qualify for the All-Tournament Team.

Starting off with Team A in Pool D there was Oklahoma Red, Georgia Red, Colorado, Michigan Blue, Missouri, Alabama, and Iowa. Team A had Colorado the first dual and Texas started off looking good but dropped the last 6 matches to lose 44-26 putting Texas up against Georgia Red their next match which they handled easily in a 59-9 thumping putting them up against Michigan Blue next. Texas gets by Michigan Blue 40-30 to put them in the 3rd place match which happen to be Colorado again and again Texas loses, but this time 42-21. Texas A makes the Bronze/Copper bracket that had Oklahoma Blue, Nebraska, and Utah. Utah was the first dual, Texas didn’t make it past Utah and loses 37-28. Texas made the score a little tighter with Oklahoma Blue but lost 36-31. Texas did take care of business with Nebraska beating them 37-29 to face off against Kansas Blue in the placement matches. Kansas edges out Texas 39-28 to give Texas a 14th place overall.