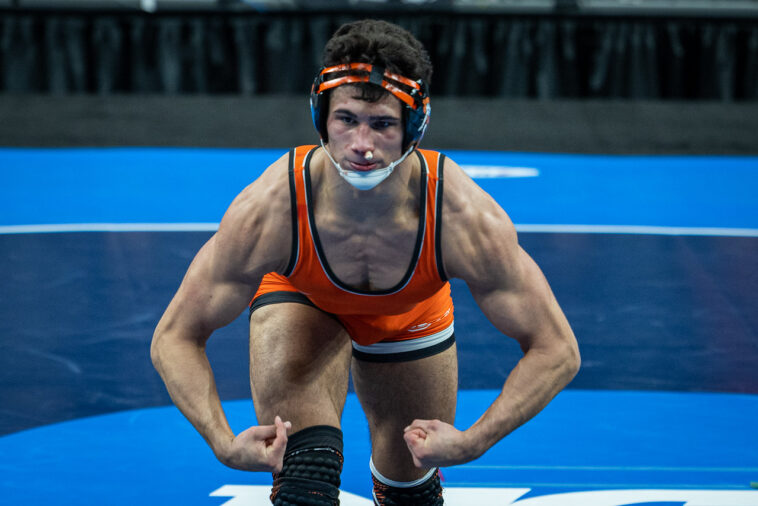 The Cowboys placed third as a team with 99.5 points. No team outscored their seed more than the Pokes did at the event. The Cowboy wrestlers combined to place 39 spots higher than their seeds, with the next closest being 21.

Ferrari struck first in the 197-pound national final match with a takedown less than a minute into the first period. Two escapes for Bonaccorsi were the only points he scored as Ferrari added an escape and riding time point to seal the victory.

“He’s a young guy who has a lot of spirit about himself and he just won an NCAA championship,” head coach John Smith said. “He talks a big game and he shows a big game.”

With his victory, he joins elite company at Oklahoma State with Richard Hutton in 1947 and Pat Smith in 1990 as the only true freshmen to win national titles. He is the first national champion for the Cowboys since 2017 when Dean Heil won the 141-pound title.

Ferrari caps off an impressive freshman season with a 20-1 record and Big 12 championship. He also became 41st freshman All-American for Oklahoma State earlier in the tournament.

“It’s been crazy to do that and chase what those guys have done. Now for me, I could have five years if I choose to, but we’re taking it one match at a time right now. I’m focusing on one match at a time, one takedown at a time and it pays off. It’s awesome to be a part of such a great program and the greatest team.”

As for the other finalist, No. 1 seed Daton Fix made it to the championship bout at 133 pounds for the second time in his career, ultimately falling to No. 2 Roman Bravo-Young of Penn State, 4-2. After a scoreless first period with the wrestlers feeling each other out, Bravo-Young rode Fix the entirety of the second period. Fix cut his counterpart to begin the third period and briefly took the lead after Bravo-Young was hit with multiple stalling calls. The riding time point in favor of Bravo-Young tied the match at two at the end of regulation. A sudden-victory takedown was the difference in the match as Fix dropped the second overtime championship bout of his OSU career.

The loss was the first of the season for Fix, who returned to the Cowboy lineup on Feb. 14, and was 13-0 prior to the match. The sophomore won his second Big 12 conference championship and earned All-America honors for the second time in his career.

In the 2021 season, Cowboy wrestling finished with a perfect 10-0 dual record, recorded at least five All-Americans for the 59th time in school history and finished third as a team at the NCAA Championships. In 89 appearances at the national tournament, the Cowboys have finished among the top three in the final standings 62 times and have won 34 team national titles – more than any other team in any other sport.