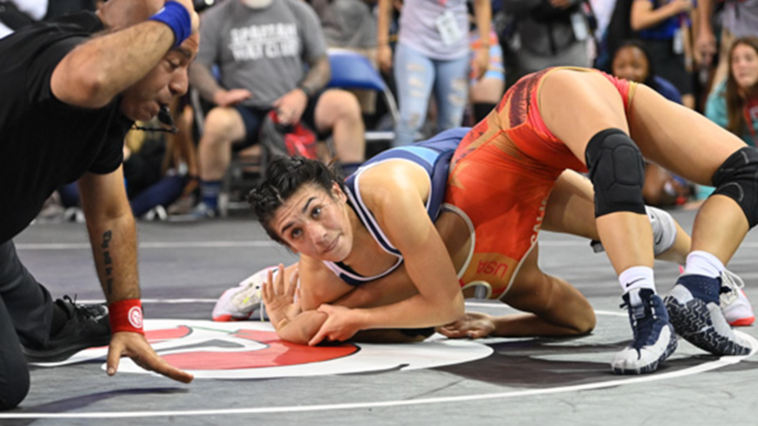 Alexis Montes getting the fall, Photo by: Farrah Sheeren of Phlox Photography

Lots of fireworks happened today.  Team Texas Junior Women finished 5th over all with 6 All-Americans.  The 16U Greco Roman boys had some All-Americans, 4 to be exact with Kody Tanimoto making the semifinals.

Below we do a little recap of each Women All-American.

112-Avery Ashley started out slow and couldn’t get her offense going in her semifinals match and after 6 minutes of hand fighting loses 5-0 to Aubre Krazer of Pennsylvania. Krazer was ranked #16 @ 106lbs.   Ashley then drops her consolation semifinals match to Karlee Brooks of Arizona as well, Brooks was the #2 nationally ranked wrestler @ 112 and would wrestle for 5th place against Kiely Tabaldo of California where Ashley drops her 3rd consecutive match to settle for 6th place. Tabaldo was #5 nationally ranked.  Avery Ashley was ranked at #13 nationally.

117-Alexis Montes in her semifinal match against Isabella Gonzales of California the #7 nationally ranked wrestler got caught in a head lock for 4 points right off the bat.  Montes then comes back with a takedown of her own and gets the turn, after 30 seconds of fighting, Montes gets the fall to spring board herself into the finals.  Montes faces graduated senior Juliana Diaz of Florida in the finals the #4 nationally ranked wrestler at 117lbs.