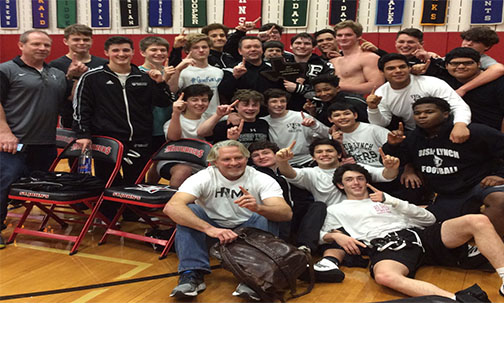 On Saturday, January 21, the  Prep State Duals Championship was held at St. John’s in Houston. After the initial pools, Bishop Lynch,  Liberty Christian and host St. John’s emerged to complete the championship bracket.

In the opening dual between BL and Liberty, it was a close back and forth battle, but Liberty went up by 11 points (39-28) with only two matches to go. That meant BL’s only path to victory was 2 pins in the final 2 matches. Co-Captains Michael Metry and Greg Martinez were next up for the Friars and each delivered, giving the Friars a come-from-behind 40-39 victory.

In the next dual between St. John’s and Liberty, St. John’s defeated Liberty 40-24,  setting up a championship match with BL. This time, the Friar’s lower weights (Luke Mazur, Will Parsons, Judd Pankey, Michael Parsons and  co-Captain Max Mills) opened strong and BL jumped out to a 27-0 lead.

However, St. John’s came charging back and closed the gap to 1 point, until wins by Metry, Martinez and Warren Walls sealed the victory for BL, who  won 39-32. This is Bishop Lynch’s first State Duals title since the tournament began.

These Friar wrestlers went undefeated in the tournament: