Aaron Meister has resigned his position as Wayland Baptist University men’s and women’s wrestling coach to accept a similar job in his home state of Kansas.

Meister will serve as wrestling coach at Friends University, an NAIA school in Wichita, Kan., not far from where he grew up in Holton, Kan., and where he attended college at Labette County Community College and Fort Hays State University. Meister’s wife, Jill, who works as administrative assistant in the Office of the Vice President of Academic Affairs and Graduate Studies at WBU, also is from Kansas.

Meister will be the inaugural coach for Friends’ newly-added men’s and women’s wrestling programs. 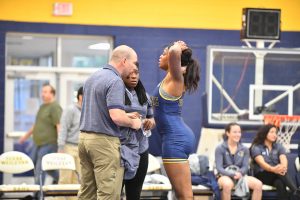 Meister has been at Wayland for 10 years, first serving as assistant coach under Johnny Cobb when the wrestling program began in 2010. Meister then took over as head coach when Cobb retired prior to the 2014-15 season.

“First and foremost, I want to thank the athletes, coaches and people who accompanied me over the past decade. Ultimately, my time at Wayland would not have existed without Coach Cobb. He’s the person who selected me to assist him, and what a great mentor he is to this day,” Meister said.

Meister is proud of what he’s accomplished at Wayland, which includes recruiting and nurturing 91 all-Americans, 13 national champions and one world champion, Tamyra Mensah-Stock. His team also won the first NAIA Women’s Dual Team title in 2019. Among the all-Americans is an Olympic Trials champion, two World Team Trials champions, three U.S. Open champions, a University World runner-up, and 25 individuals who were either World or Olympic Trials qualifiers.

Also at Wayland, Meister has endowed two scholarships in honor of Cobb and Mensah-Stock. He also created the Pan Handle Wrestling Association, currently serving as president.

“We’re deeply appreciative of everything Coach Meister has done for Wayland. We’re extremely happy with the time and commitment he’s shown for our wrestling programs,” WBU Athletics Director Rick Cooper said. “We certainly hate to see him go but at the same time are very excited for him.”

Meister, a three-time U.S. Open Veterans Division national champion and a 2017 inductee into the NJCAA Wrestling Hall of Fame, said he is “humbled” in looking back at the strides WBU wrestling has taken over the past decade.

“A lot of good things have been built and were accomplished. The experiences and memories of my time at Wayland are priceless to me,” he said. “I’m leaving Wayland, but I will be leaving a legacy with the Johnny Cobb & Tamyra Mensah-Stock Wrestling Endowments that were established.

A search for Meister’s replacement is under way.