What a weekend of Senior Nationals with a lot of Texas Wrestlers show casing for the first time.  Senior Nationals this year was being held in Coralville Iowa.
We will start out with Greco Roman where by my count we only had 6 Texas Wrestlers competing.  Texas Wesleyan University and Wayland Baptist University each had wrestlers but the stand out was Timber Creek High School 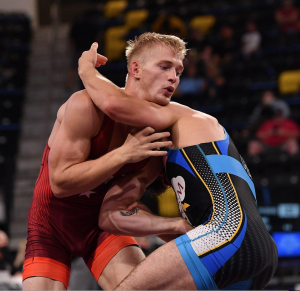 Alumn Zachery Grimes.  Grimes after a first round bye loses his first match to the #1 seed P. Smith of Minnesota.  Grimes from there sealed off 4 consecutive wins to reach the consolation semi finals where he finally gets stopped by the #4 seed A. Ortiz another Minnesota wrestler, barely losing to a 5-3 decision.  This drops Grimes to the 5th place match where he faces yet a 3rd Minnesota Storm wrestler Ryan Epps who wins the battle 9-0.  Grimes takes 6th at the Greco Roman Senior Nationals making Grimes the lone Texas placer.

How the rest of the wrestlers faired