Public address announcer Steve Davis summarized it best at the conclusion of this year’s NCWA National Championships. The wrestlers standing on the podium would be the only ones awarded All-American status two weekends ago after the NCAA cancelled both its Division II and Division III national championships. While the rest of the sports world was seemingly shutting down, the NCWA held fast and continued to run its tournament in Allen, TX.

In the Men’s division, Ty’Rae Carter of Texas A&M repeated as the National Champion at 149lbs. and was again awarded as the tournament’s Most Outstanding Wrestler. Not discounting Carter’s thorough thrashing of his bracket, it was Schreiner freshman Cody Cabanban’s championship performance at 125lbs. that lit up the stage on Saturday night. Cabanban is Schreiner’s first men’s NCWA National Champion.

Schreiner freshman Cody Cabanban defeated Jovan Garcia of Big Bend Community College in an electric match to secure the national title at 125lbs. Within the first thirty seconds of the first period, Garcia was in on Cabanban’s legs twice, nearly scoring a takedown on the second attempt before it was waved off after a challenge by Schreiner Head Coach Troy Jewell. Undeterred, Garcia shot again at the restart and secured the takedown, but he managed to hold his opponent to the mat for just seven seconds before Cabanban escaped and made his own successful shot attempt to go up 3-2. Garcia quickly escaped, the two returned to their feet, and a high intensity hand-fight ensued. Cabanban scored yet another takedown but was reversed to his back by Garcia who got two quick swipes for a two-point near-fall. Jewell stepped in again for yet another successful review that negated the back points. Cabanban scored a quick escape to go up 6-5, ending the first period. 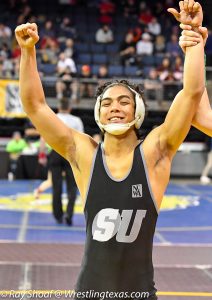 For the remainder of the match, Garcia could not hold his Schreiner opponent down for any length of time. He gave up another quick escape to start the second period. Garcia scored another takedown, but Cabanban was quickly back out to his feet. The two shot against each other simultaneously to go into an entertaining scramble during which Garcia appeared to have put Cabanban briefly on his back. The scramble continued, and takedown points were awarded only to Cabanban which put him up by a score of 10-8 to finish the second period.

Garcia would go on to escape early in the third, rolling out of the Schreiner wrestler’s grasp via a Granby. Cabanban was relentless, and he followed that escape with a high crotch takedown to take the score to 12-9. Cabanban adjusted his top-ride strategy on the fly as Garcia tried again to hit the Granby upon a mat return: this time, Cabanban spun quickly around his opponent to maintain his top position. Garcia would escape just one more time. The wrestlers scrapped heavily on their feet in the remaining seconds, but Cabanban scored the final takedown to win the national title at 125lbs. by a final score of 15-10 with riding time. 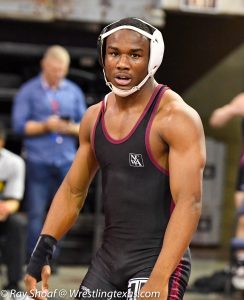 championship match. Blevins took the title in 2018, but Carter took it back in 2019. The NCWA made this highly anticipated rematch the marquee event of the evening, scheduling it as the final match of the tournament to be wrestled. It ended rather quickly.

Carter has had a year to prepare for the rematch. He says he sought out additional practice partners in both College Station and his hometown of Houston. He tore through a regular season schedule to rack up a record of 22-0 entering this weekend. He won five additional matches just to get into the championship match, all by pin or technical fall. “Going into the finals I just wanted to stay relaxed and have fun,” said Carter. “I treat every opponent the same.”

Texas A&M head coach Mike Konetski says “I got every piece of video I could get my hands on including the past matchups. If Ty was going to get beat, it was going to be by something we hadn’t seen before.” Leading up to the match Konetski’s strategy for Ty’Rae “was all about trying to keep his routine as normal as possible. That was the focus. Being calm, being prepared, and always being the wrestler who scores last each period.”

Midway through the first period of the championship match, Carter snatched Blevins’ ankle and proceeded to elevate it above his head. Blevins fell to the mat with Carter landing on top to secure the takedown. The two scrambled on the mat, and Blevins escaped. When Blevins came to his feet, he seemed unsteady and called for injury time. The trainers ran Blevins through the concussion protocol while Carter paced the mat, but they ultimately concluded that it was safe for Blevins to return to the action.

Carter shot three more times in the ensuing minute but failed to convert any of these takedown attempts into points. With just fifteen seconds remaining in the first period, Carter hit a textbook duck-under and spun himself around his opponent to secure the points, and that was it. The trainers came out to check on Blevins again, and after a brief discussion, Blevins forfeited the match. Ty’Rae Carter had successfully defended his title at 149lbs.

Going into the women’s 130-pound championship match, Schreiner University sophomore Serena Cervantes said “I was so happy that I was there, but I still wanted to win and dominate my opponent.” She wasted no time in doing just 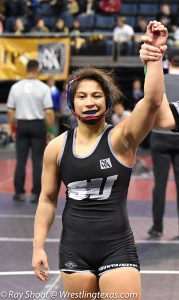 that. After her opponent, Serenity Thomas of University of Toledo, slipped an early body lock, Cervantes hit a blast double that sent Thomas across the mat. Momentum carried them out-of-bounds before Cervantes could secure the score, but the message had been sent. With one minute remaining in the first period, Cervantes hit a sweep single and kicked out Thomas’ leg for a two-point takedown. Thomas escaped, but Cervantes hit her with one more blast double at the edge before the period expired.  Her momentum pulled her out before she could secure the points.

In the second period, Cervantes pulled Thomas’ head underneath into a front headlock which she transitioned into a tight nearside cradle. Cervantes pinned her opponent at 4:05 to secure her first NCWA National Championship.

Teammates Challenge One Another for National Title

It was a sure bet that Schreiner University would take home the gold at 116lbs. in the Women’s division. It was simply a matter of determining which Schreiner wrestler would come out victorious. The NCWA allows teams to enter two wrestlers per weight class in its National Championships format, and both Kamile Begeal and Jazelyn Ruelas wrestled their way through the topside of the bracket to meet in the championship finals.

Begeal worked quickly to lock up Ruelas’ head and arm. She sagged her opponent slowly to the mat, exposing Ruelas’ back for a four-count. She never let up. Ruelas fought valiantly to get off her back for ninety seconds, but Begeal’s squeeze was too much to overcome. The referee slapped the mat with 0:55 remaining in the first, and Begeal locked in the Schreiner women’s first individual national championship of the evening.

Schreiner University’s Allie Mahoe returned to the Allen Event Center for this year’s NCWA National Championships looking to improve upon last year’s third-place finish at 116lbs. She was not to be denied. She wrestled up one weight class this year at 123lbs. where she met Umpqua Community College’s Mariah Annis in the championship finals. 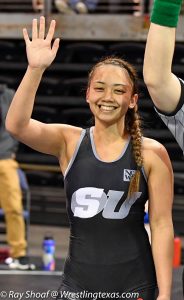 Annis was on the attack from the start, shooting to Mahoe’s outside on a single-leg attack. Mahoe defended with a whizzer, flipping her opponent to her back, but not before being carried out of bounds with no points recorded. Annis went right back to the leg upon the restart, but Mahoe again threw a whizzer and a cross-face. This time the wrestlers were center-mat, and Mahoe was able to scoot behind for her two points. The Schreiner sophomore reached through to secure a ball-and-chain but was unable to turn Annis before the period expired.

The Umpqua coaches put their wrestler on top to start the second period. Annis managed at one point to sink a deep half-Nelson, but Mahoe kept her opponent stuck on the opposite to successfully defend against any back exposure. Toward the end of the period, Annis dropped below the waist to prevent a Mahoe stand-up escape, but she stayed there too long and was penalized one point for stalling.

Up 3-0, Mahoe elected to start from the bottom position in the third period. This time her Umpqua opponent followed Mahoe up to her feet before throwing her back to the mat. Annis grasped a bundle, but Mahoe circled out to defend. Annis’ next thought was to throw in a boot and work to sink a power-half. Mahoe defended the position for well over one minute. With just fifteen seconds remaining in the match, Mahoe finally slipped the boot as Annis moved high on the ride. Mahoe swam for the head, pulling her opponent in front of her and to her back for a reversal and four near-fall points before the match expired.