Braxton Brown of Allen High School, Alexander Pena of Lubbock High School and Camille Fournier of Weatherford High School are this years 3x UIL State Champs.  Below we give a little break down of each. 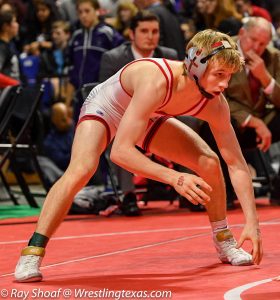 First we will start with Braxton Brown a Junior from Allen High School in the 6A Class.  Braxton is only 1 of 2 wrestlers in the state in either class still eligible for the covenanted 4x UIL State Champ.  Brown’s only losses this year were to the #3 ranked wrestler in the nation.  Brown is currently ranked 6th himself in the nation.  Browns first state championship was over Dominic Chavez @ 106 by a 1-0 decision in 2018 his toughest finals match to date.  The point was from a locked hands call on Chavez in the 2nd period. Brown ended the season with a record of 43-4.  The  second state championship was over Kalen Napier of Weatherford @ 113 whom he defeated by tech-fall in 4:10 with a record of 51-2 for the season. This year there really wasn’t anyone in the state of Texas that had an answer for Brown as he cruised to his 3rd state championship with a win over Carson Laughery of Lake Travis  with a fall in 3:18, season record of 45-2 bringing a total win/loss thus far of 139-8.  More impressive is none of the 8 losses are from any Texas wrestlers and all from out of state nationally ranked wrestlers only. Brown is the 15th 3x State Champ since UIL started in 1999.

The 2nd 3x State Champion is Alex Pena of Lubbock is in the 5A class.  Pena never wrestled in the 2017 State 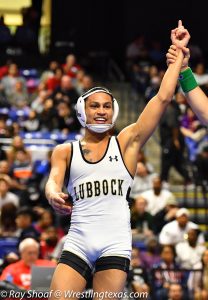 Tournament but came on strong in 2018 when he won his 1st State Championship over Jesse Martinez of Dumas by a decision of 11-5 ending his season with a record of 44-3.  2019 at the same weight Pena makes the finals again to face the same wrestler in Martinez again in the State Finals.  This time he defeats Martinez in a 9-5 decision with a season record of 22-3.  This season up a weight class Pena was undefeated looking like he would cruise to his 3rd State title heading into the Regional tournament where Andres Mendoza of Canyon Randall gave Pena his first loss of the year in the regional finals match winning by fall.  This set up the drama when Pena made the State finals only to face Mendoza again.  This time Pena did what he does in State finals matches and defeated his opponent in a 10-4 decision making Pena the 16th, 3x State Champion.

Camille Fournier of Weatherford in the 6A class is the 3rd and only women 3x State Champ this year  and a 4x finalist only losing her freshman year in the finals to Destiny Rodriguez of Arlington Houston by a decision of 8-6.  winning an even 50 matches that year and only losing 7.  Fournier’s 2nd State Championship was over Samara Chavez of Arlington Martin in 2018 and is Chavez’s only loss to a Texas girl in her high school career.  2019 started Fournier’s undefeated streak and got her 3rd State Championship over Annamarie Crixell of Oak Ridge in her fasted win in a finals match at 49 seconds, ending her season with a record of 42-0.  This year her 3rd Championship was over Jessica Crane of Arlington Martin in an 8-1 decision giving her a career win/loss record of 180-10.  Fournier is the 4th Women’s 3x State Champ since UIL started in 1999.