Day one of the state tournament brought plenty of success, as well as surprise. Regardless, there was some tough wrestling that’s leaving everyone excited for what day two will bring. Best of luck to all of the girls still in the tournament!

95 Pounds
The day started with no surprises. The top four girls all made it to the quarter finals. However, this is where things get interesting. #4 Chalimarys Rodriguez from Keller Timber Creek lost to #9 Isabella Walsh from Katy Cinco Ranch in the quarter finals, putting Rodriguez in the consolation bracket. The match was close, but this is still a blow to Rodriguez, who will no longer be able to compete for first place in her last high school season. The top three girls, #1 Olivia DeGeorgio from College Park, #2 Moe Cruz from Klein Cain, #3 Mia Diaz from Amarillo Tascosa, and #9 Isabella Walsh from Katy Cinco Ranch, will all be in the semi-finals tomorrow.

102 Pounds
#2 Brittany Cotter from Katy Morton Ranch caught #4 Mia Arceneaux from Rockwall in the quarter finals, resulting in Cotter losing and moving to the consolation side of the bracket. This is a shocking blow to Cotter, as this will be the first year she doesn’t compete in the finals. The semi-finals will consist of #1 Amanda McAleavey from Cypress Creek, #3 Carlie Allred from Euless Trinity, #4 Mia Arceneaux from Rockwall, and #12 Zhivanna Magdaleno from LC Clear Springs.

110 Pounds
The semi-finals lineup is hardly a surprise. It will consist of #1 Samara Chavez from Arlington Martin, #2 Carmen Allred from Euless Trinity, #3 Crystal Venegas from San Antonio Lee, and #8 Alexis Hanks from Killeen Ellison. #4 Elyse Nelson from Lewisville caught #3 Crystal Venegas from San Antonio Lee in the quarter finals, resulting in a loss for Nelson, putting her in the consolation bracket.

119 Pounds
Things got interesting today for the 119 girls. #3 Jayden Bazemore from College Park lost to #2 Jessica Crane from Arlington Martin in the quarter finals, and #4 Jennifer Thomas from Bryan lost to #1 Camille Fournier from Weatherford in the quarter finals. This means that only two of the top 4 ranked girls will be competing in the semi finals tomorrow morning. Joining Fournier and Crane is #5 Lillian Broadrick from Katy Tompkins and #15 Brooke Zejda from Plano West.

128 Pounds
Tomorrow morning will hold no surprises, as all the semi-finals competitors consist of the top 4 ranked girls in the weight. We will see #1 Gianna Moreno from San Marcos, #2 Devin Patton from Plano West, #3 Illyauna Martinez from Katy Mayde Creek, and #4 Sydney Harper from Euless Trinity. 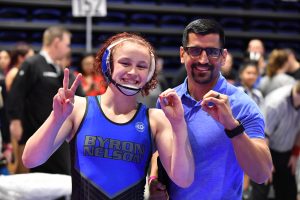 Lexi Basham and Coach Ornelas with the 200 win sign.

Attention!! Today, Lexi Basham from Northwest Nelson earned her 200th career win today in the quarter finals of the tournament. This is an amazing accomplishment, and well deserved. Basham beat #4 Abigail Denney from Oak Ridge by fall in the first period to secure the win. Not only did Basham earn her 200th career win today, she is also undefeated for the season. In the semi-finals tomorrow, there will be few surprises. We will see #1 Lexi Basham from Northwest Nelson, #2 Jordan Suarez from Morton Ranch, #3 Taylor Martinez from Prosper, and #6 Krista Garcia from Katy Seven Lakes.

148 Pounds
This is another weight class that holds no surprises. #1 Jason Foster from Austin Vandergrift, #2 Leilani Hernandez from Plano West, #3 Brooke Massaviol from Coppell, and #4 Nia Miranda from Cypress Ranch will all be competing. Although the lineup itself is what we expected, the matches will be tough, and definitely fun to watch.

165 Pounds
A major upset occured today in the match between #2 Haley Wilcox from Euless Trinity and #16 Caroline Gonzalez from Klein Collins. Gonzalez beat Wilcox by pin in the second period, earning her spot in the quarter finals. She then went on to defeat #10 Camryn Tressler from LC Clear Falls in the quarter finals to earn her spot in the semis. This girl is on fire, and is a must see this weekend. The other girls in the semi final lineup are #1 Kaitlyn Bryant from Katy Tompkins, #3 Fahydat Bello from Cypress Park, and #4 Marisol Lopez from Killeen Ellison. Tomorrow morning, Gonzalez will be battling Bello for a spot in the finals.

185 Pounds
In the first round today, #4 Arista Najera from El Paso Montwood and #3 Lessly Sandoval from Conroe wrestled, resulting in a fall for Sandoval in the first period. This knocked Najera to the consolation bracket immediately. In the semi finals tomorrow, we will see #1 Brittyn Corbishley from College Park, #2 Daniella Seely from Haltom City Haltom, #3 Lessly Sandoval from Conroe, and #5 Nicole Blinn from Katy Tompkins.

215 Pounds
#9 Amber Latta from Oak Ridge defeated #3 April Vera from Haltom City Haltom in the quarter finals today, earning Latta a spot in the semi-finals tomorrow. #4 Katelyn Allen from Lewisville wrestled, and lost to, #2 Traeh Haynes from Cibolo Steele in the quarter finals today, knocking her into the consolation bracket. In the semi-finals tomorrow, #1 Hannah Francis from Coppell, #2 Traeh Haynes from Cibolo Steele, #5 Valerie Ramos from Killeen Ellison, and #9 Amber Latta from Oakridge will be battling for a spot in the finals.