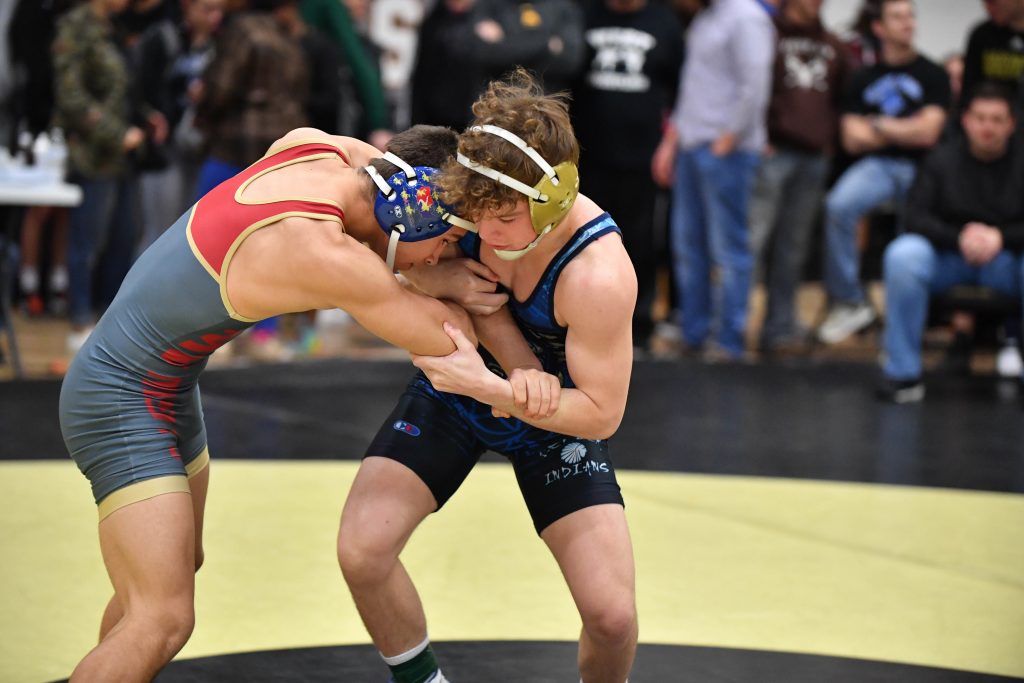 Decker vs Sanchez at Panther Classic

BY Brittany Vo, 6A Region I  Reporter

It is the eve of the Region 1-6A tournament and as teams are preparing for this action-packed weekend, we’re going to run through the tournament with the favorites to go on to Houston next weekend.

If the district tournaments are any indication, it is going to an intense weekend full of high-level wrestling. Hold on tight because it’s going to be quite the ride!

Three of the top 20 ranked boys will be represented in this tournament. #1 Shawn Ryncarz from Arlington Martin will be fending off #19 Jack Weill from Southlake Carroll and #20 Luis Lopez from El Paso Franklin. These boys should be the favorite but there will be a 4th slot that will be up for grabs. Who will step up and grab that last spot?

This weight class has 5 ranked wrestlers: #5 Justin Rodriguez, #11 Nehemiah Ventura, #13 Josh Garcia, #14 Patrick Procopio, and #19 Daniel Govea. There should be great match-ups and a fight to the end for the final four spots.

This weight class is dominated by #1 ranked Dominic Chavez but there are four other ranked wrestlers in the running for those 4 slots: #8 Luke Cambere, #15 Trey Reed, #19 Esteban Duran, and #20 Jonathan Garza.

This weight class has SIX ranked wrestlers competing. Arlington Martin leads off again with #1 Donavan Whitted. But the battle heats up with #7 Jacob Garcia, #13 Gio Cortez, #14 Jacob Desantos, #15 Emilio Acosta, and #16 Cole Bennett. These boys are closely ranked so there will be some great wrestling for the remaining spots.

#1 ranked Parker Decker leads the way in this weight class with four other ranked wrestlers vying for spots to Houston. #7 Juan Solis, #8 Oscar Hernandez, #15 Kyler Woods, and #16 Colton Kern will be taking to the mats for that chance.

It is a close race at the top of this weight class. There are five boys here that are ranked. Led by James McClain-Green at #1, he is closely followed by #3 Jaden Two Lance and #4 Mason Woodward. Rounding out the pack is #17 Jorge Macias and #18 Paul Nield.

The four ranked wrestlers here should be favored to make it to the Berry Center: #2 Preston Decker, #7 Blake Gaskill, #13 Julius Alfaro, and #14 Jonathan Hoenich.

There are only two ranked wrestlers in this region and they are #7 Massoma Edene and #19 Anthony Delgado. This leaves the door open for two other wrestlers to grab those two spots to the state championships!

Just like the 160 weight class, there are only two ranked wrestlers here. It’s a close race between #10 Abathar Mounshed and #12 Quinn Wilkinson for the top spot. Who are the other two wrestlers hungry enough to take the remaining spots?

There are four ranked wrestlers here and they should be favored to punch their tickets to Houston: #2 Cameron Bye, #11 Colton David, #16 Hasnat Raza, and #17 Mathew McDougall.

Talk about a stacked weight class. There are seven ranked wrestlers here: #1 David Powers, #4 Max Soto, #5 Koby Kidd, #7 Joshua Ruvalcaba, #9 Tofa Sanft, #10 Grayson Walthall, and #11 Luke Halter. It is a testament to how tough this weight class is when there will be 3 ranked wrestlers who won’t make it to the state championships.

There are five ranked wrestlers here led by #1 Faddellah Mounshed and then #4 Adam Nix. #18 Pedro Escobar, #19 Treshon Young and #20 Aidan Forgay round off this list and it should be in a tight race for the last two spots.

Similar to the 220 weight class, there are five ranked wrestlers and they are all in the top 10 so it should be close all the way to the end. Led off by #3 Rashawn Johnson, you have #5 Khristian Verses, #6 Ethan Kappler, #7 Michael Magar, and #10 Payton Lovell.

There are four ranked wrestlers with three of them in sequential ranking: #3 Mia Diaz, #4 Alivia Oliver, #5 Chalimarys Rodriguez, and #14 Bryanna Narvaez. These four should be favored to go on.

For the girls, this weight class will be brutal with SEVEN ranked wrestlers taking to the mat. Led off by #3, and probable favorite to win regionals, Carlie Allred, she is followed by #3 Chalimar Rodriguez, #5 Kadee Kelley, #8 Kaycie Tanimoto, #9 Makenzie Peterson, #10 Arianna Rodriguez, and #18 Evelyn Zapata.

Just like the 102 weight class, this weight class will be tough with seven ranked wrestlers. Defending state champion #1 Camille Fournier is the favorite to win but #2 Jessica Crane will be a tough challenger. Rounding out the other five wrestlers are: #8 Lexys Basurto, #10 Iashea Jackson, #11 Nevaeh Chambers, #12 Mia Armstrong, and #13 Bayley Trang.

This weight class has 5 ranked wrestlers and is probably the tightest weight class as all are within five ranking placings of each other.  #4 Hedda Forare-Berg leads the pack and is closely followed by #5 Sydney Harper, #7 Josephine Igengbai, #8 Hailey Tucker, and #9 Sandra Frausto.

This weight class will also be a tough one with seven ranked wrestlers: Led by two El Paso wrestlers, #1 Aremie Steele and #2 Kassandra Lindermann, they are closely followed by #5 Haven Hoang, #6 Haley Wilcox, #9 Pamela Escobedo, #10 Amaiya Reynolds, and #12 Lianne Gomez.

This weight class also has six ranked wrestlers and just like the 128 weight class, these wrestlers are all in the top ten. This should also be a competitive class to watch! It is led by #3 Katelyn Allen, #6 Daya Powell, #7 Brianna Allen-Thompson, #8 Ariana Miles, #9 April Vera, #10 Amirah Wooden

Wow! There is going to be a lot of great wrestling this weekend at the W.G. Thomas Coliseum! There will be a lot of talent on the mats and a good indicator of the bright future of Texas wrestling!

Just because we based our predictions on rankings, it doesn’t mean it is set in stone. This is wrestling! Anything can happen. All it takes is one wrestler who is hungrier than the rest to shake up the race in every weight class. Who wants it more?!

To the student wrestlers: congratulations on a great season of wrestling. Whether your season ends this weekend or it continues on, you all should be proud of the hard work and dedication you put in. Remember that the outcome of this tournament or any other tournament does not define who you are. It is how you conduct yourself afterwards that does.

Parents:  As you make the trip to Haltom and are packing your stadium seats and other necessities, you are probably even more nervous than your wrestlers! Checking and double checking that your kids have their snacks and gear all in order…making sure there is no deviation from the standard routine i.e lucky sock, lucky blanket, etc. Yes, we are a superstitious bunch!

But in the midst of all this excitement and nerves, remember that wrestling is a journey. It is one of the hardest sports out there but one that will build discipline, character, and ability to thrive under pressure like no other. It is a journey so whether your wrestler is done for the season or is still in the race to the Berry Center, remember that it is a growing experience and we should always be there to make each step of our wrestler’s journey a memorable one.

As Brian Tracy so succinctly wrote, “Excellence/perfection is not a destination. It is a continuous journey that never ends.”  Enjoy the journey!