We go through the lighter weight 106-145  5A boys here and just give our 2 cents and in some cases, it may not be worth that much.  We go through each Region per weight and just for fun predict who has the best chance to make it through to State going by the latest rankings. 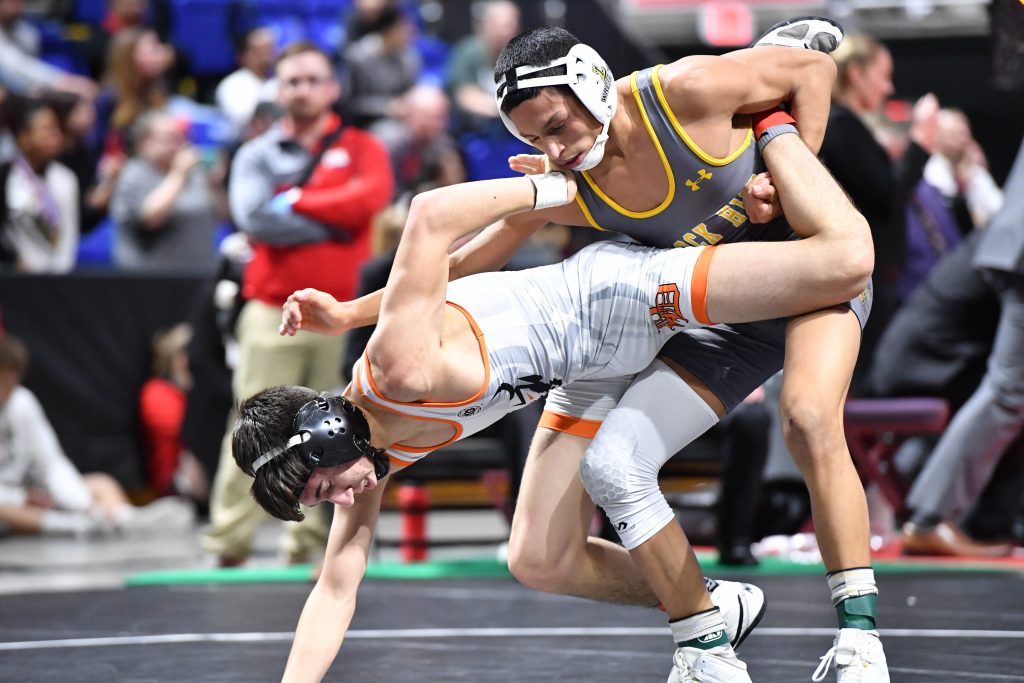 Like the 6A boys only has 1 senior in the top 20 but does have a lot of juniors in the mix with only one State placer returning and that’s Bradyn Valdez of Lubbock Monterey and the #1 ranked 106-5A wrestler to date.

Region I is probably the most packed with top ranked wrestlers with #1 Bradyn Valdez of Lubbock Monterey and # 2 Zach Casias of Lubbock both sophomores. Valdez is returning state runner up and Casias didn’t make the trip last season but did defeat in overtime AA #3 Kenneth Hendricksen of Creekview at Dual State this year to give him some skins on the wall.  Trebor Moreno the freshman sensation of El Paso Eastwood hasn’t  wrestled as of late but is supposed to be ready for districts but he will have to content with Jayden Bustillos of Riverside, Jaylen Purvis of Chapin, and Hector Holguin of El Paso High along with Valdez and Casias leaving someone at home in Region I.

Region II Is all DFW wrestlers with #5 Wesley Goleman of Burleson Centennial and #6 Josh Weatherall of The Colony leading the way here both state qualifiers. From there you have 8 other wrestlers ranked from 16-30 that could climb to the top with Joe Stephens of Frisco and Santino Saunders of Midlothian the next region 2 ranked wrestlers in order. Saunders is the only other state qualifier in the bunch.

Region III Has All American #3 ranked Kenneth Hendriksen of Carrollton Creekview and #4 Gavin Word of College Station A & M Consolidated leading the way here being the only state qualifiers as well, with Parker Stafford of Highland Park and James Wooley of Waller  the next guys in the ranking line up.

Region IV Is all the southern boys and is lead by #8 Daniel Supak of Victoria West and #9 Isaac Rodriguez of San Antonio Wagner.  Supak is the only returning state qualifier here.  Alberto Mendoza of Mission Sharyland a freshman looking to make his way to the Berry Center will have to content with Mark Libiran of CC Veterans Memorial, Arlin Padilla of Uvalde, and Derick Arellano of Edcouch-Elsa the only senior of the 106 group ranked coming in at #20.

This weight has 5 returning state placers with one from each region in the top 4 with 8 seniors in the group.

Region I Has returning state placer #4 Aiden Medina of Lubbock and #7 Alan Rodrigues of El Paso Hanks a state qualifier in the top 2 followed by #8 another freshman sensation out of El Paso Eastwood Ethan Franklin. Coach Vasquez has his team drinking the koolaid as they been winning at Eastwood. Senior Sean Gonzales out of Hereford in the panhandle could get into the mix.

Region II Has 2 returning state placers in #3 Tyten Volks of Frisco Centennial and #6 Landon Brown of Northwest.  Frisco Liberty has a freshman Mitchell Borynack coming in at #5 looking pretty solid.  The rest of Region II will be a dog fight and anyones guess for the remaining spot to state.  Noah Clayton of Midhlothian Heritage is the only other ranked wrestler in the mix.

Region III #1 ranked senior D’Andre Brown of Wylie East leads the pack here and is the clear favorite to punch his ticket. Joe Gonzalez of Waltrip, Emmanuel Villagomez of Caney Creek, Joseph Rives of Bryan Rudder,  Connor McFeely of Hutto, and Nathon Brentnall of Princeton will all battle for the remaining spots.

Region IV the top returning state placer #2 Abel Alvarado of PSJA Memorial who placed 3rd last year also a senior in the top gun here if he doesn’t drop to 106.  #9 Aiden Burke of Cedar Park was a state alternate last year as a freshman and #10 Jamil Gonzalez of Corpus Christi Ray a senior is a state qualifier rounding out the top 3.

This weight only has 2 returning state placers and one just happens to be 2x state champ and #1 Alex Pena of Lubbock.

Region I Pena the 2X state champ is the clear favorite here but #3 Andres Mendoza of Canyon Randall is returning runner up at this weight.  Pena won at 113. Christopher Tavares another Eastwood wrestler comes in at #6 and Sergio Mota of Ft Worth Chisholm Trail comes in at #1o.

Region II Has the most ranked wrestlers in this weight starting with #2 Cade Morgan of Frisco Centennial a 2x state qualifier looking to finally get on the medal stand his senior year. #7 BrendonMcCurry of Burleson Centennial has been coming on strong at the end of the season and #8 Jeyden Castillo of Colleyville Heritage  round out the top 4. 5 others will mix it up a lot from the #10-20 ranked wrestlers.

Region III Only 2 guys  ranked here in the top 20, #5 Connor George of College Station A & M Cons a returning state qualifier  and #14 Noah Alavi of McKinney North so wide open for newcomers to make the scene.

Region IV Reynoldo Perez of Ulvade ranked #4 is the top seed here and returning state qualifier from last year and placed 6th the year before. Jaymez Ramon of Corpus Christi Moody, Diego Aguilera of PSJA Memorial, and Justin Garza of Cedar Park round out the final 3.

Region I and Region IV are the heavy regions here with only one returning state placer and 5 qualifiers in the mix so this could anybody’s chance here to make the big show.

Region I has the #1 and #2 ranked wrestler here with Zack Pena of Lubbock and Gabe Garcia of Amarillo respectively.  Then El Paso comes into play with #9 Hector Frausto of Del Valle, #13 Aaron Hernandez of Eastwood, #14 Andre Ramirez of Eastlake, #15 Dylan Prieto of Andress, and #17 Nathaniel Lucero of Bel Air setting up this loaded region to leave someone at home after regional tournament.

Region II #5 John Bennett of Frisco Centennial is the clear favorite here and #11 Hudson Herring of The Colony should place.  The only other ranked wrestler is #20 Jaden Machado of Lancaster.

Region IV #3 Angel Avila of Sharyland Pioneer is a returning state qualifier while #7 Micah Ribera of Dripping Springs  a senior didn’t make the post season last year but looks to get back to state where he was a 2017 qualifier.  #8 Rene Trevino of Rio Grande City was a state alternate last season. #16 Alberto Elizondo of PSJA Memorial was a state alternate as well .  2 sophomores Jeremiah Arradondo of Corpus Christi Moody and Noel Torres of Vanguard Academy round out the top 20 in this weight class.

Region 2 and 4 lead the pack here with the number of ranked wrestlers.  2 returning state placers and 8 qualifiers make up the weight as well.

Region I. #2 Ah Leet Yart of Dumas is the lead guy here in a weaker region 1 class,  #11 Brandon Sanchez of Saginaw and Jesus Fierro of El Paso Del Valle round out the top 3 ranked wrestlers.

Region II Has returning state runner up from Frisco Lone Star #1 La’Stot Pleasant.  #3 Felix Saunders of Midlothian is a returning state qualifier also and will making a push for the podium.  #12 Kaden Peterson of Frisco Wakeland just recently dropped to 132. #14 Moises Pacheco of Frisco Lebanon Trail, Cael Squibb of Dallas Wilson, and Mason Reid top out the ranked list here.

Region IV Has 4 wrestler in the top 10 and 3 others in the top 20.  #5 Jackson Greer of Leander Rouse and #6 Gage Foulds of Cedar Park are the top 2 with Foulds a returning state qualifier. #8 Brodie Dyer of Dripping Springs and #10 Ethan Rodea of Leander Glenn round out the top 10.  Adrian Martinez of Edcouch-Elsa, Alexander Tinana of Corpus Christi Ray, and Matthew Pacheco of San Antonio Wagner are 3 other that could very well content for their spot on the regional podium.

Region I Has #4 Lawson Nagel of Azle a state qualifier and #5 Steven Rodriguez of  Canyon Randall the lone state placer as the top 2 guys in this region but  Riley McBryde of Lubbock Monterey and Jordan Ellington of El Paso Andress round out the top 4 ranked wrestlers here.

Region II is open for all takers, #2 Jackson Bourne of Frisco Reedy and #13 London Snow of Frisco Centennial are the lone ranked wrestlers in this region.

Region III Has half of the ranked wrestlers in this weight guaranteeing that a lot of guys are staying home.  #3 Coby Eikenhorst of Carrollton Creekview leads the way here with #6 Hunter Duncan from Lucas Lovejoy a 3x state qualifier hoping to climb the podium his senior year following in 2nd.  #7 River Benton Jones of McKinney North, #8 Carter Puckett of Highland Park, and #10 Octavious Esquivez of Waller round out the top 10.

Region IV Has the #1 ranked wrestler in Dominique Quiroz of Uvalde a returning state qualifier. #9 Bryce McLaren of Leander Glenn is returning qualifier himself.  #11 Zach Eveleth of Dripping Springs and #14 Joseph Zeiske of La Joya Palmview make for the only ranked wrestlers from this region.

This weight has the top 5 ranked being state placers with returning 138 champ at this weight and 2 x state placer #1 Jackson Carter of Midlothian.

Region I #2 Moses Torres returning state placer at 152 last year drops a weight this year to better his 5th place finish and is the only returning wrestler having been to the big dance from this region.  #7 Juan Romero of Dumas, Joseph Torres of Lubbock Monterey, Isaias Lucio of Lubbock, Duane Barton of El Paso Austin, and Andrew Flores of El Paso Eastwood will try to upset Torres of Randall.

Region II #1 Carter will look to repeat at this weight but will have some battle with the likes of #4 Tucker Spradley of Frisco Reedy, #5 Tristan Seales of Frisco Liberty, and #6 Evan Atchley of Colleyville Heritage.  Spradley is the returning 5th place finisher at state at this weight.

Region III #3 Spencer Buchholz of Highland Park was the state runner up at this weight last year.  #8 Jacob Hanson of Pflugerville, #9 John Richards of Hutto, and #10Christian/Derrick Graham of Houston North Forest round out the top 4.

Region IV Has Daniel Mays of Dripping Springs and Bobby Gomez of Uvalde as the only 2 ranked wrestlers from this region leaving it wide open for new comers.