Texas Wesleyan University Wrestling in its Inaugural home dual at the Sid Richardson Center Saturday came away beating both Schreiner University 34-15 and Wayland Baptist University 31-9 in the men duals.  The Women lost to Wayland Baptist 29-14, but got their first victory of the inaugural season against Schreiner University 24-14 starting the many of first ever for the Wesleyan Rams.
Schreiner University was short handed in the girls and the men for several different reason with injuries, eligiblity, etc..   needless to say they didn’t win any of the duals  giving up forfeits, but the ones who did wrestle put on a great match.
Wayland Baptist University mens team whom everyone figured would dominant the duals came up short against the Rams only winning 2 matches.  Both Texas Wesleyan and Wayland Baptist had enough wrestlers per the exhibition matches to have a 2nd dual.  Wayland went 1 for 1 on the duals for the men and did the sweep with their national ranked women’s team.
The crowd was loud and at large for the event, at times you couldn’t even hear the “Kat Calls” which made for an exciting event.   Lots of Texas wrestlers and it was great to see the wrestlers competing in the next level.  Their was even a birthday celebration for Wayland Baptist’s Kaylynn Albrecht complete with birthday cake.  Was also told that Madison Brown of the Texas Wesleyan girls team was celebrating her birthday as well.  The 915 El Paso wrestlers from different teams also made their presence known on the mat. If you wasn’t there then you missed out on History yourself and speaking of history we all got to see Coach Bedford and his assistants in a suit.  The night was awesome. 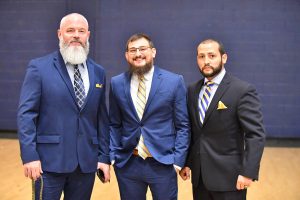