Sisters on the Mat Wrestling club make their annual trip to compete in one of the largest women only national tournaments in Iowa this weekend.  Mat of Dreams Girls Conflict for Charity Tournament will compete on Saturday and the Midwest Mat of Dreams Girls HS/Youth Duals on Sunday.
Head Coach and Founder of SOTM Monica Allen will be taking 2 teams this year with multiple girls in each weight.

What a pre-season!!!! We had 35 girls sign up for Amarillo Sister on the Mat pre-season practices and we also had some drop in’s every once in a while. Nearly 40 girls, within 8 weeks, from several panhandle schools and clubs, meeting up, practicing together, getting better and building bonds through the sport of wrestling!!! This may seem like no big deal to the wrestlers, they are just doing what they do, but as a coach and a wrestler from SO long ago, this is a HUGE deal!!! Girl practices were rare and far and few between until 1999 in our high school rooms and even at that time, you could still be the only girl with a bunch of boys. There are still girls in the state of Texas and the nation that are in a room all alone. And that is why we do what we do! We need to support each other in this crazy sport, inspire each other, when you no longer feel inspired, motivate when you feel unmotivated, and push others when pushing yourself seems impossible. They became sisters. No matter the club or school, no matter if you are going to be standing on the opposite side of that circle next weekend or on dual night, we need to have each other’s backs for so many reasons.

Just this pre-season, we had college girls and past local wrestlers lead practices. We did a clinic in El Reno, Oklahoma which signed up 15 youth wrestlers to their club. We took 6 high school girls to a college visit to OCU and sent 30 college care packages to college female wrestlers that are just starting their season. We are now ending our pre-season with a trip to Iowa for Conflict for Charity and Midwest MatDream Duals to compete in a two-day tournament composed of an individual tournament and a dual team tournament. We will be driving a charter bus, touring and practicing at the Dan Gable National Wrestling Museum, sleeping on wrestling mats and showering in locker rooms!! We are living the dream!!! 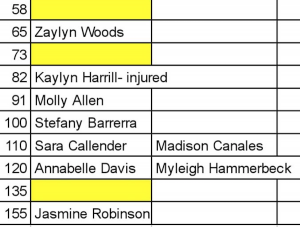