The Schreiner University in Kerrville Texas held its 2nd annual Schreiner Duals Tournament this past weekend and it is noted as being under the radar in hopes of the elite competing against the elite on both men and women teams.  The Elite came to wrestle from all over the state compiled into different wrestling clubs.  So all of the wins and losses are unofficial and will not be provided or recorded.  Although wrestlers weighed in for the dual purposes the exhibition matches were whatever and whoever you wanted to wrestle.   Some of the elite were wrestlers like 3x state champ Daniel Manibog who took on all comers like Chase Warden and Mario Danzi both state champs.  AJ Loften, Roberto Silva and Triston Tadeo both went at it with Silva bumping up a couple weights.  There was a rematch of the 6A state 285lb Match between Johnny Green and George Marsh. The Dooley brothers where in the house as well with young top wrestlers like Corey Camden.  3F Wrestling Club who won the tournament along with  Loften and Warden, had Carson Laughery who just won the Vegas Regional Open and Luke Sloan a state runner up to name a few more.  The Boneyard Wrestling Club along with Camden had other state qualifiers and placers like Jacob Smith.
Eli Sheeran with Spring Klein Wrestling Club won the MOW award going undefeated and beating a state champ.

Spring Klein Women’s Club came with hammers and won the duals tournament. Xochitl Mota-Pettis who Monday was announced as the TSHSEA winner. Olivia Motely defeated a state champ.  Amanda McAleavey got a hole punched into her lip when she bit through it causing stitches.  The stand out on the women side was Avery Beckman  With Vici Wrestling Club who is a tough 7th grader who defeated a 3x state champ which won her the MOW award for the women.  Beckman could very well be a 4x state champ when she gets to high school.  Freshman Crystal Venegas got her a win over a 2x state champ as well. 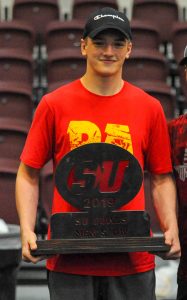 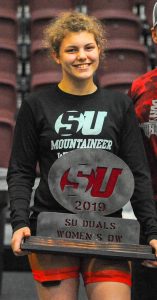 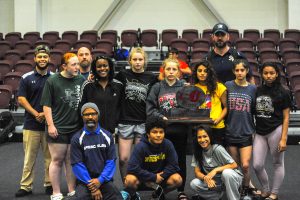