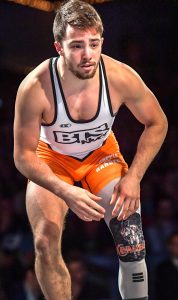 Jack Mueller shines on the open stage in NYC at sold out Hulu Theater in Madison Square Garden that gathered a list of who’ who for the Beat the Streets known as The Grapple at the Garden.
Wrestlingtexas had Tom Dendy in the house catching the action and catching the action he did.  Dendy witnessed the dominance of Mueller against his opponent Nick Piccininni of Oklahoma State whom some of the national writers had Mueller losing.   Quoted  “Neither wrestler has a very extensive background in freestyle, but the takedown battle certainly seems to favor Piccininni. Mueller generates so much offense from the top position, and he will not have that luxury in a freestyle setting.”    Iam guessing they didn’t notice Muellers extensive stats in the freestyle world and USA Wrestling “not the quoted above” didn’t even have his Fargo National championships listed where he was a Cadet and Junior National Champ in 2013 and 2014, was a finalist in 2015.  Wrestlingtexas had no doubt.

Mueller was all over Piccininni from the start with his leg attacks. When the Piccininni tried to get back in the match, 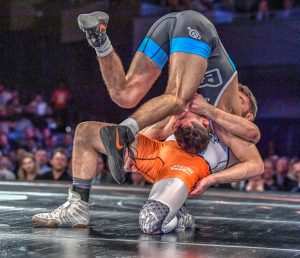 Mueller hit him with a huge chest wrap for four. From there, Mueller continued to crank it on and  closed it out with a pushout for a 11-0 tech fall leaving no doubt who was the dominant wrestle.