Just to give some recognition to the ones who never seem to get any recognition, ” The Officials”.  Every year I hear how bad Texas officials are, how they never get the call right, don’t know the rules, their on power trips,  and etc…. but at the same time if we are to grow the sport of wrestling in the state of Texas,  we as a wrestling community need to get behind the officials and support them.  With wrestling growing in the state of Texas at the speed its growing we are going to need a lot more officials then we have now and with how the officials get treated now who want s to be one ??  The officials are like anything else, they can get 99 calls right but will only be remembered for the one bad call.
The NCAA however seems to think that Texas has some quality officials as this past year we have had 3 officials selected to the NCAA National Finals at one division or another.   Rex Anderson, Jeron Quincey, and Dan Lang.   Those same officials also were apart of the DII, DIII, JUCO, NAIA, and NCWA  Championships tournaments along with a hand full of others.  This is outstanding since Texas doesn’t have any DI, DII, or DIII college wrestling programs in the state. 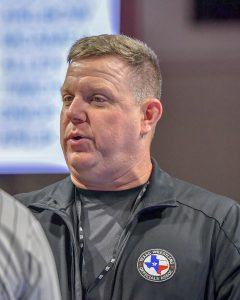 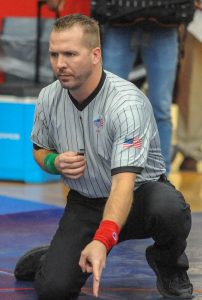 Jeron Quincey
Quincey who also calls the Houston area his home is currently the Gulf Coast Chapter President of the TWOA and Chair of the Evaluations Committee for the TWOA State Association still works local tournaments in the Houston area (10 to 20 events a year) as well as being the Head Official of the Allen Outlaw Tournament the past several years.  Additionally, Quincey works the NHSCA National Championships every year and serves as Past President and Founding Member of the InterCollegiate Wreslting Officials Association (www.icwoa.org).
Dan Lang
Lang another Houston resident does local area events like the others as well as travels around the US officiating College tournaments and Duals.  Lang serves as the treasurer of the ICWOA and was 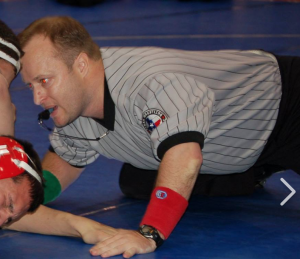 also a founding member.  Lang is also the UIL State Wrestling Rules Interpreter and has been since 2010.  Lang was also inducted to the Texas Wrestling Hall of Fame in 2015.
Eric Dobey from DFW did the NCWA’s along with Anderson and Quincey.  Jim Engstrom from DFW heads the NCWA’s up as the director of officials.

Texas is also trying to increase the number of officials. This year Anderson will be combining the state officials rules clinic with the Texas coaches association clinic in September. More to come on that later.

This past year Texas had 285 registered officials. For those interested in becoming or learning more on becoming an official fill out this form https://www.twoa-gc.org/wp/join_us/
The local chapter rep will contact you.
Tweet