Schreiner’s Alvarez Bumps Up for Team, Secures Herself a National Title

Freshman Alyssa Alvarez of Schreiner University sacrificed for her team at this past weekend’s NCWA National Championships by bumping up to the women’s 235-pound weight class, and it paid dividends for not just her team, but for her personally as well. Alvarez went on to win a National Championship, and, in the process, secured her team’s second-place finish in the tournament.

Heading into the tournament, Schreiner University Head Coach Troy Jewell knew the best way to the women’s team championship was via a strategy of strength in numbers. But with multiple wrestlers sitting out the tournament due to injury, Coach Jewell was forced to make adjustments to the lineup. Alvarez agreed to bump up a weight class to fill the spot at 235 pounds. But Alvarez weighed in at only 195 pounds.  Said Alvarez: “I moved up a weight class so that our team 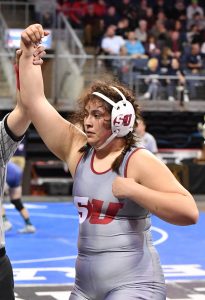 would be able to get as many of the weight classes filled, but with a forty pound weight difference, it was very intimidating.” Incredibly, she went on to work her way through the tournament without allowing a single point to be scored against her.

After tech-falling her semi-finals opponent by a score of 15-0, Alvarez went on to win her championship match 7-0 over Jackie Castro of Grays Harbor College. Coach Jewell, who was awarded the NCWA Women’s Coach of the Year, said, “Prior to Alyssa’s championship match, I told her to go out there and win another one. Alyssa has wrestled in three national championship matches over the last year. Last year she was the folkstyle national champion, and she was runner up at Fargo. I was fortunate enough to be able to coach Alyssa in two of the three matches now. She definitely walks out there with that same championship confidence every time.”

Alvarez and Castro hand-fought and battled for position throughout the first period, but finished the round with no score. Alvarez chose bottom to start the second period, and Castro eventually worked to put in a tough half-Nelson against her. “Defending it, I got really scared when she started to crank it even more and more, and I thought to myself that it could be over,” Alvarez said. But Castro’s pressure slipped high, and Alvarez was able to shuck her off for the two point reversal. Alvarez would not look back from there, as she dominated the third period with a quick takedown and ride-out against her opponent, drawing three stall calls for additional points.

Coach Jewell, summed up Alvarez’s championship run thusly: “She did a good job establishing position and controlling it the whole tournament. That pretty much sums up her entire tournament: she was completely dominant.”

“As soon as I was done with the match I heard my teammates yelling at me to jump on my coach and that’s when I jumped on him hugging him,” said Alvarez. “He did not expect that.”

“Thank goodness I caught her running at me out of the corner of my eye,” joked Jewell.

Alvarez is a graduate of Prosper High School where she wrestled for Coach Sion King. She will continue wrestling this Summer as she trains to compete in the women’s freestyle season. She wants to see NCWA women’s wrestling grow: “Anyone out there that is looking to wrestle in this division should do it. Especially many of the high school girls looking to wrestle. For me, I would want the women’s division to try to get bigger than what it is.”