As the Timber Creek girls head back to school Monday morning with their first ever UIL State Team Wrestling title, here is a recap of what we saw in each weight class: 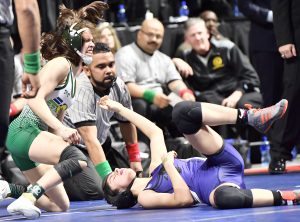 95lb: Sophomore #1 Brittney Cotter (21-3), Katy Morton Ranch made her way to the finals with little drama, save for a 2-0 quarterfinal victory over#4 Annabelle Garcia (38-7), Keller Central. Senior #2 Esther Walker (42-1), El Paso Montwood never even made it into the third period of her first three bouts, pinning her way into the championships, where she surprised Cotter with a win by pinfall in the third. 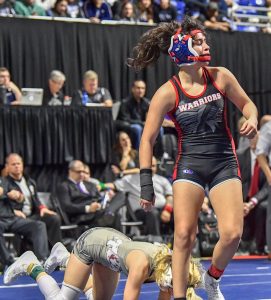 102lb: As expected, undefeated double All-American and defending Cadet National Champion sophomore #1 Samara Chavez (24-0), Arlington Martin, bulldozed her way through the bracket before dispensing of senior #2 Aylen Vivar (35-3), Austin Bowie with a 12-1 major decision in the finals, while her brother, warming up for his championship match, looked on. In the most recent national poll, Chavez held the #3 position at 112lb. 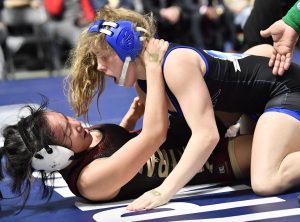 110lb: Senior #1 Amanda McAleavey (47-0), Houston Cyp. Creek squared off against Trinity junior #2 Carmen Allred (50-7) in the semifinals, defeating her in a 13-2 major decision.  Sophomore #3 Adia Ronea (45-6), Keller Central took a 10-4 decision over senior #4 Lydia Ramos (41-5), Houston Cyp. Ranch in the other semifinal. McAleavey got past Ronea 4-0 to stay undefeated and take her first title. Amanda is currently ranked #16 nationally. 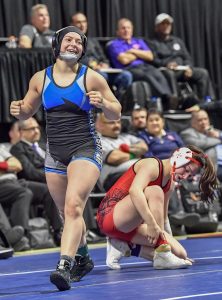 119lb: Senior #4 Annamarie Crixell (52-6), Conroe Oak Ridge was the bracket-buster here, providing a major shocker in the quarterfinals. Trailing 5-0 to defending state champion #3 Jessica Crane (46-3), Arlington Martin, Crixell, who has struggled against top-3 competitors, surprised Crane with a head and arm throw, pinning her 36 seconds into the third. Crixell then faced #2 Olivia Mottley (60-4), Houston Cyp. Ranch.  Mottley has manhandled the smaller Crixell all season and did more of the same, building a 9-2 lead in the first period. Outmatched and with nothing to lose, Crixell went again to the head and arm early in the second, sticking Mottley 18 seconds into the period. Mottley would go on to set the UIL girls’ single season win record (60) with a 5th place finish. On the top side of the bracket, defending state champ #1 Camille Fournier (42-0), faced her only serious challenge in the quarterfinals against #6 Devin Patton, Coppell.  Patton carried a narrow 3-2 lead into the third period, but Fournier, ranked #9 nationally, got an early take-down and maintained control for almost the entire third period to walk away with a 6-4 win. That was the closest anyone would come to the double All-American and National Cadet Freestyle Silver medalist, who amassed a 14-5 semifinal bout lead against #5 Zahra Metzgar, Katy before pinning her in the third to earn a third consecutive trip to the finals. Camille went out on the attack right away, pinning Crixell in 49 seconds, the quickest pin in the finals giving us three straight undefeated champions on the night. Camille now has two UIL golds and a silver in her first three seasons and will be looking to advance up the national rankings at folkstyle and freestyle nationals. 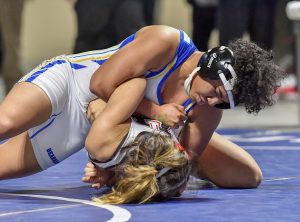 128lb: Before we get to the obvious, shout-out here goes to Katy senior #7 Megan Thomas (43-9). In last year’s district finals, she put herself on the list of contenders by upsetting champion Kayla DeLeon of Cinco Ranch.  Thomas reached the semi-finals in the top half of the bracket against reigning National Champion #1 Xochitl Mota-Pettis (45-0), Klein, who ultimately prevailed in as tightly contested 4-3 decision. Megan went on to cap off her senior year with a 5th place finish, while Mota-Pettis coasted to an 11-0 finals win over senior #3 Calarissa Archuleta (43-3), Rockwall-Heath, our fourth undefeated champion to be crowned. Mota-Pettis finishes her high school career ranked #1 Nationally and will be looking to defend her title next month. 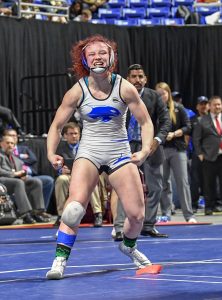 138lb: No real surprises at 138 this as the much anticipated Basham-Suarez II finals rematch lived up to the hype.  Both juniors, #1 Lexie Basham (56-0), Northwest Nelson and #2 Jordan Suarez (48-3), Katy Morton Ranch familiar Team Texas teammates, traded takedowns and escapes in the first period, keeping things knotted at 3-3. Lexie picked up an extra takedown in the second, to hold a 9-7 edge heading into the final period. Basham added to her lead with a couple of more takedowns in the final period, ultimately scoring a fall with 6 seconds remaining on the clock. Senior #3 Mhina Oseitutu (37-6), Katy, who was district and regional runner-up to Suarez, fell to Basham in the quarterfinals, then dominated the back side of the bracket, racking up four straight pins to take third. Fans can already get excited about the prospect of Basham-Suarez III next season, but first, we get to see them team up and take on the rest of the country as part of the Texas National Team this summer. Basham currently holds the #3 National Ranking, Suarez sits at #9. 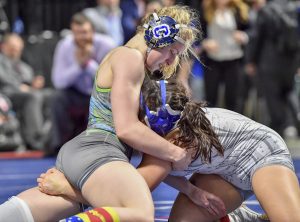 148lb: Another final…another 1 vs 2 matchup, another undefeated, nationally ranked champion. (Are we getting redundant here) #1 Hunter Robinson (44-0), Conroe Woodlands College Park was not really challenged all weekend. Her closest match was the championship bout against fellow senior #2 Magdalena Meraz (41-5), Grand Prairie. Robinson now adds gold to her state silver medal and pair of bronzes.  We expect to see her competing on the national stage before going to join whichever college program she chooses. Hunter is currently ranked 6th nationally in the USAW poll. With the Robinson win, all six undefeated finalists kept their perfect season intact and walked home with a gold. 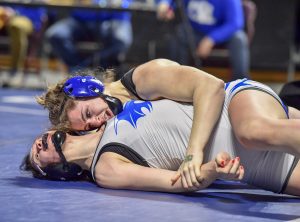 165lb: In our preview article, we anticipated a battle of the titans in the finals, where #2 Ashley Lekas (34-1), Plano West was hoping to avenge her only loss of the season against #1 Kaylynn Albrecht (52-2), Northwest Nelson.  No opponent, on either side of the bracket, even survived past the second period against either one of these nationally ranked powerhouses. The finals showdown was a highly aggressive, physical, grueling battle. Albrecht struck first with an early takedown before Lekas seized the upper hand with a takedown and a pair of turns building a 9-2 lead that she never relinquished. Ashley added an escape and takedown in the second, taking a 12-2 lead into the final period. Albrecht was back on the offensive with a takedown, pressing for a turn, she got reversed onto her back, landing hard on the mat before getting pinned with 17 seconds left. Kaylynn suffered a possible head injury on the landing and gave everyone in the arena a scare as she experienced brief seizures before being carted off the competition floor on a stretcher. After a CT scan, some IV fluids and an inspiring heart to heart pep talk from Team Texas Women’s team director Travis Clark (head coach at Euless Trinity), Kaylynn was enjoying fish and chips with family and friends at Mo’s Irish Pub and already talking about Nationals next month! We expect Lekas to move up from her #10 national ranking after defeating national #6 Albrecht. 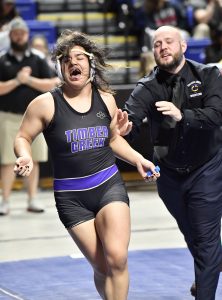 185lb: We said this weight class had the most potential for a major shake-up…and the middle of the bracket delivered as promised. It was upset-central at 185lb, as none of the top-3 ranked wrestlers reached the championship match. In the end, it was last year’s silver and bronze medalists each moving up a notch on the podium. 2018 silver medalist #5 senior Bianca Rosales (39-3), Keller Timber Creek was trembling and overcome with emotion after picking up two penalty points in the last 35 seconds to upset All American #1 sophomore Brittyn Corbishley (40-3), Conroe Woodlands College Park, 2-1. Meanwhile, 2018 bronze medalist #4 Traeh Haynes (38-4), Cibolo Steele surprised #2 senior Ashley Molina (38-2), Houston Langham Crk with a pin in the third.  Rosales controlled the championship match the entire way, earning a 6-2 win as well as the state team title. In the 1 v 2 third place bout, Molina avenged her earlier loss to Corbishley, scoring 5 points in the final 11 seconds to walk away with a 6-4 win and the bronze. 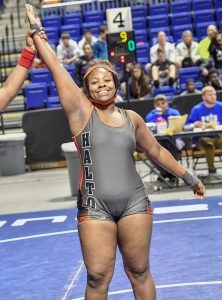 215lb: The UIL random seed policy moved our 1 v 2 matchup into the semi-final round, where 2018 bronze medalist #2 Aaliyah Stewart (34-3), Haltom City Haltom frustrated defending state national champion #1 Gabby Holloway (42-2), Katy Seven Lakes by a 6-2 score. In the other semi, #4 Daya Powell (25-7), Keller Timber Creek won a 10-6 decision over Genevieve Jackson (33-8), Weatherford. Stewart when on to earn a first period pin against Powell for the gold. Nationally ranked #3 Holloway pinned her way through the rest of the consolation bracket to pick up the bronze.

Congratulations to all of this year’s state qualifiers, wee look forward to seeing you all at nationals.  Wrestling Texas will also be providing extended Team Texas freestyle season coverage this summer.