We do a break down of how all the 6A Boys State Champs got here and what they had to go through to reach the top of the podium, and how the #1 ranked wrestlers per weight ended up.  Who were the sleepers, surprises, and over-rated. 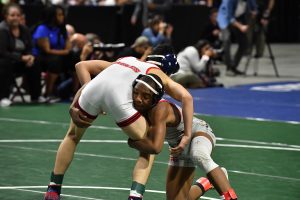 decision giving Whitted his first State Championship on his first season as a varsity wrestler, #3 Cole Minnick of Katy Tompkins didn’t place. #4 Wyatt Maturin of Conroe took a 3rd place finish beating #5 Carson  Laughery of Lake Travis. #13 Jakob Smith of College Park surprised people and made it to the 5th place match where he defeated #6 Xavier Harrell of Cypress Ranch. 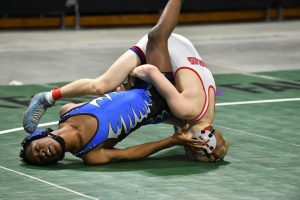 #1 Braxton Brown of Allen captured his 2nd State Championship keeping his goal of a 4 timer in tact.  Brown beat the #2 ranked wrestler Kalen Napier of Weatherford by TF [email protected];10 showing why he is nationally ranked.  #3 Jackson Crandall of Katy who got to #3 by beating Christian Lopez of Houston Westside loses this time to Lopez in taking 4th and Lopez regaining his #3 spot.  #5 Christopher Martinez of El Paso Franklin won his 1st match then had Brown in the quarter finals and didn’t recover losing to the #6  Zack Flowers of Rockwall next match in SV-1 8-6.  It was #7 Micah White of Humble Kingwood  defeating #9 Daniel Countryman of Plano West for the 5th place spot. 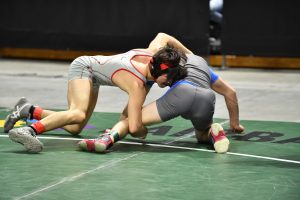 #1 Dominic Chavez who was out for a month with an injury finally gets his State championship holding true to his #1 status.  Chavez beats #4 Mason Woodward of Weatherford 6-2. #2 John Geiger of Leander who won region 2 by defeating #6 Gabe Martinez of Allen by fall and #5 Cade Morgan  Plano West took a 4th place finish losing to a revenge match of  Martinez who this time wins by a major decision 15-4 to take 3rd.  #3 Isaiah Calderon of Cypress Falls loses to Woodard in the semi finals then Martinez in the consolation semi finals then beating #11 Jacob Garcia of Keller Central for 5th.  #5 Morgan went 1-2 and didn’t place. 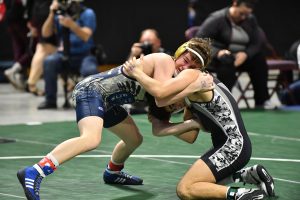 The top 6 stayed the top 6 just in different order.  #1 and returning state champ Noah Gochberg of Vandegrift was denied a 2nd championship to #2 Parker Decker of Keller who finally has a state championship to go on his resume after placing 3rd the last 2 years.  #1 Gochberg takes 2nd.   #3 Luke Garcia of Arlington Martin takes a 4th place finish losing to #6 Kobe Nelms of El Paso Franklin who takes 3rd.  #5 Noah Yeamans after losing twice 2 #4 John Richardson of Prosper finally wins 3-2 to take 5th place. Richardson takes 6th after being runner up in 5A last year. 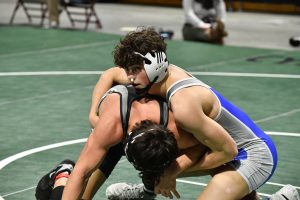 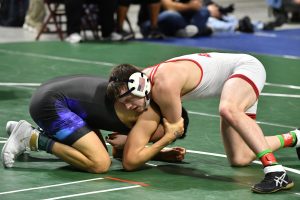 The top 6 stayed the same here as in 126 with #1 Trent Dooley showing why he is nationally ranked as well, cleaning the board to his 2nd state championship defeating #4 Daniel Hernandez-Mendoza of Houston Westside by a 7-1 decision in the finals .  Hernandez-Mendoza was the only wrestler who wasn’t pinned or TF by Dooley.  #2 Preston Decker of Keller lost his quarter finals match to #3 Jacob Aragon of Plano West in UTB 5-3 then lost to #6 Jesse Diaz of Tascosa 4-3 after beating #5 Roberto Silva of Edinburg Vela in the consolation quarter finals by TF to take 4th place.  Aragon beats Silva for 5th and Silva takes 6th. Diaz takes a 3rd place finish with the first 4 time state champ in his corner Nick Herrmann of Tascosa. 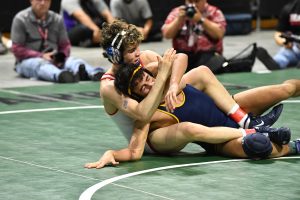 #1 Mario Danzi of Allen the freshman sensation who has been #1 almost all season showed why by winning his 1st state championship setting up his goal of being a 4 time champ in motion by beating #3 Joshua Jimenez of El Paso Coronado 11-7 in the finals.  Nice to see former state champ and brother Issac Jimenez in his corner.  #2 Aaron Lofton of Vista Ridge beat #5 Carson Lipsey of Rockwall for 3rd place with Lipsey taking 4th. #10 Josh Thomas another higher ranked College Park wrestler like the 106 Jakob Smith placed 5th over #4 Kaleb Jewett of El Paso Franklin who placed 6th.  Head Coach Eric Spjut of College Park a former 3 time state champ himself knows how to get his wrestlers ready for the big dance. 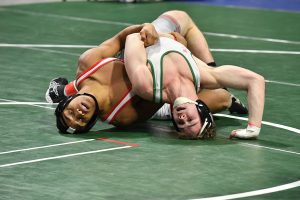 #1 Gunner Pierson of The Woodlands reached the finals to meet #2 Elise Brown-Ton of Allen as in the region 2 finals although the outcome wasn’t the same.  Brown-Ton shows what happens when he doesn’t get caught in a cradle by winning a major decision over Pierson 13-2 to take his first state championship.  #3 Zach Carpenter of Arlington Martin beats #4 Jonathan Wertz of Cypress Lakes for 3rd place giving Wertz 4th. True to their rankings.  #5 Brandon Huerta of San Antonio Reagan came in undefeated and took to losses but managed to keep his #5 ranking by placing 5th over #8 Brandon Thomas another College park wrestler who took 6th. 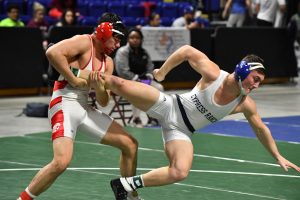 You could say that the real finals match here was #1 Daniel Manibog of Katy and #2 Eric Two Lance of Arlington Martin was held in the semi finals.  Two Lance gave Manibog his toughest match probably all year with Manibog only winning a 5-3 decision.  Manibog goes on to Tech Fall #9 Zackary Good of Cypress Ranch who was under the radar due to injury late in the season in the finals giving Manibog his 3rd state championship showing why he is a nationally ranked wrestler.  Good takes a 2nd placed but will probably only climb to a #3 ranking.  Two Lance Comes back and takes 3rd place over #6 Heath Clinton of Rockwall Heath who settles for 4th.  #7 Rex Stamatis beats #3 Alejandro Cavazos of Allen for a 2nd time and takes 5th giving Cavazos 6th.  #4 Joseph Fuentes went 1-2 and #5 Humberto Alcala went 0-2. 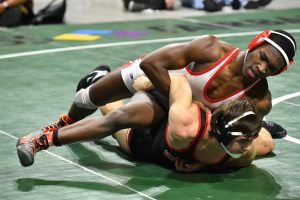 #1 Sam Mora of Tascosa makes the finals for the 3rd consecutive year and take 2nd for the 3rd consecutive time.  Last 2 times it was to Juwan Robinson of Allen this time it was KiShawn Higgins of Katy giving Mora the finals loss and Higgins taking the championship.  #3 Eli Sheeran of Klein had a region 2 finals rematch for 3rd place with #5 Brian Pollard of Plano West.  Sheeran got the last second win in the last match.  Pollard gets the SV-1 4-2 for the 3rd place finish giving Sheeran the 4th place finish.  #4 Tristan Tadeo of Arlington Martin after his loss to Higgins in the semi finals losses the next 2 matches to take a 6th place finish.  #7 Will Villegas of Allen gives Tadeo his last loss to the 5th.  #6 Michael solis of Pharr-San-Juan-Alamo went 0-2 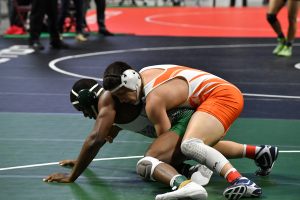 #1 Adam Kilgore of Arlington Bowie proves you can be out all season and come back for districts and still win a state championship.  As in the Region 1 finals Kilgore defeated the returning state champ #2 Tereus Henry of El Paso Montwood in the state finals giving Henry this only 2 losses in 2 years. Kilgore 1st, Henry 2nd. The 3rd place match was a region 2 finals rematch between #3 Nate Dooley of Allen and #4 JaMarcus Thomas of Bryan resulting in the same outcome with Dooley winning by fall this time to take the 3rd place spot and Thomas taking 4th.  #5 Devin Jimenez of San Antonio Madison and #6 John Holland of Arlington Martin both went 1-2.  #7 Jackson Macias of Shertz Clemens takes 5th place over #10 Rommel Azurin of Cinco Ranch who takes 6th. 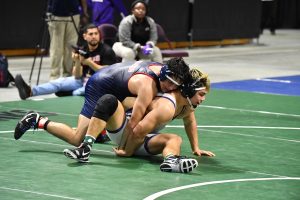 Rankings were off in this weight, #1 Colin Clark of Klein took 3rd over #6 Zane Davis of Allen who settles for 4th place. #2 Chris Colfield of Houston Westside goes 1-2. #3 Jarod Camacho of Cypress Ranch goes 1-2. # 5 Deandre Rucker of Klein Collins goes 2-2 losing in the blood round.  The finals match was between #4 Nathan Alvarez of San Antonio Roosevelt and #8 David Powers of El Paso Franklin with Alvarez taking his 1st state championship and Powers settling for 2nd in a 4-3 decision.  5th place went to #12 Max Soto of Arlington Martin and 6th place went to #11 Jose Coubles of Northwest Eaton. 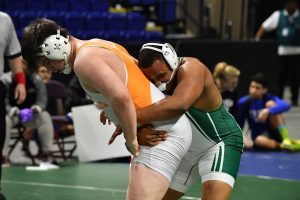 The #1 Isiah Brown of Killeen Ellison and #2 Sean Delmonte of Rockwall had a rematch of the region 2 finals which went Brown’s way then.  In the championship finals match with Delmonte ahead by 1 point and trying to keep Brown down, Delmonte returned Brown to the mat in a manner that drew a penalty point from the ref when Brown sustained an injury. Brown was transported to Memorial Hermann Cypress Hospital for evaluation. He was still under evaluation when we departed the waiting room after witnessing Byron Nelson HS senior Kaylynn Albrecht finally receiving her 165lb silver medal after her own CT scan. So our prayers go out to Isiah Brown and his family and I hope all come out good. Meanwhile, Delmonte loses in injury default and takes 2nd and Brown gets 1st. #3 Brennann McElroy of Oak Ridge goes 1-2 and #4 Morgan Anderson of Killeen Shoemaker goes 0-2.  #11 Prasad Salvi of El Paso Coronado takes a 3rd place finish over #6 Jacob Akerman of Friendswood Clear Brook who place 4th.  #7 Christopher St John of San Antonio Churchill takes 5th place and #5 Joel Valencia of San Antonio Madison takes 6th. 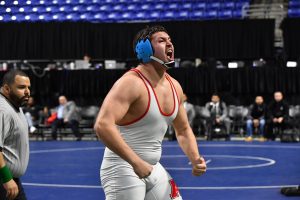 #2 Johnny Green of Allen a returning state finalist finally gets his state championship when he defeats #3 George Marsh of New Braunfels in the state finals match Marsh getting 2nd.  #1 Grant Bordelon of Houston Strake Jesuit takes his first loss in the semi finals by Marsh on a 6-4 decision.  Green’s only loss in Texas was to Bordelon and he was hoping to get a rematch but am sure a 1st place award will be sufficient.  #5 Dom Varela of El Paso Coronado takes  4th place.  #7 Curshawn Wilkins of Katy Taylor takes 5th over #11 Andrew Pruske of San Antonio Churchill who places 6th.  #4 Ryan Johnson of Comal Canyon goes 1-2 and #6 Timothy Nance of Arlington Lamar  goes 2-2 losing in the blood round.