Texas had a lot of college wrestlers competing this weekend for the first time including a brand new Schreiner University.  A lot of the wrestlers got a taste of the increased level that college wrestling is while others shined in their debut.  Now am sure I missed a lot of wrestlers but below are just some of the wrestlers I recognized while sorting through results.  Cameron Haddock and Jasmine Hernandez won Championships in their freshman debuts.

Michigan State Open.  Braedan Redlin (Allen) @165  in his first collegiate wrestling lost his first match and then won by fall back through the consolation side all the way to a 3rd place finish in his Freshman debut for Ohio State University. 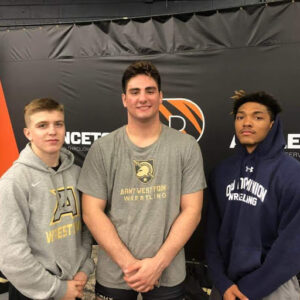 OCU Open.  Drake Dudley (Flowermound) @174 place 3rd for North Texas University Open division.  Lee Jerhett (Hebron)@285  placed 3rd as well in the Open division for University of the Ozarks.
Schreiner University attended for their first mens tournament and a few of the wrestlers got their first collegiate wins and pins to become the first for the University.  Conner Wilson (Allen) @141 made it to the semi finals and got injured and defaulted out for Oklahoma State in the Freshman/Sophomore division.  Michael Kumlien (Northwest) @141 made it to the blood round for NEO (Northeast Oklahoma University).

NWCA All Star Classic.  The battle of Maria Vidales of Emmanuel  and Charlotte Fowler of Campbellsville went to Vidales 12-0.  Wayland Baptist’s Brittany Marshall won her match 3-1 while Ramos-Diaz lost hers 10-0.

Bob Kellogg Open.  Jasmine Hernandez (Cy-Fair) @ 116 in her freshman debut didn’t give up a single point on her way to a championship finish in her first collegiate tournament for Lyons College.  Kassidy Ramirez (Rio Grande City) took a 3rd place finish for Lyons College as well.