Dominic Chavez of Arlington Martin right off the bat in his 2nd match got hold of #11 nationally ranked Cullan Schriever of Iowa who gave Chavez his first loss.  Chavez then stormed back 6 matches in a row  all but 1 match won by 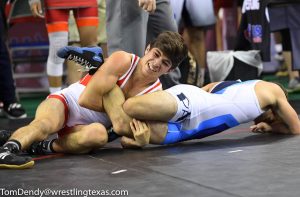 tech-fall’s including one over #20 nationally ranked Jeremiah Reno of Missouri.  The match to get into for 3rd place was against the #4 nationally ranked wrestler Brendon Garcia of Colorado who he was beating the whole matco match his 2017 freestyle 5th place tomorrow in the medals match.h, but gave up a late takedown to lose 7-5.  That was one of the best matches I’ve seen Dominic wrestle and Iv’e seen him a bunch.  Chavez will try to match his 2017 5th place finish from last year.

Daniel Manibog of Katy, if anyone, has to be an MOW for Team Texas Juniors,  a lot of guys wrestle tough and beat state champs along the way before getting eliminated, but Manibog after beating an Arizona 3x champ, and a Washington state champ, a Montana state champ  then runs into a 4x, thats right a 4x Fargo National Champ who has never lost at freestyle in Fargo until he wrestled Manibog.  Manibog beats the 4xer Anthony Artalona of Florida 7-5 in an awesome fault battle on the mat to reach the quarter finals.  Manibog lost to a Wisconsin wrestler then stormed back 3 matches in a row beating another Arizona wrestler, then #16 nationally ranked Cade DeVos of Iowa 9-3, then #7 nationally ranked Coltan Yapoujian of 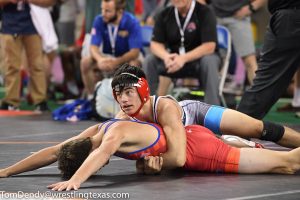 Colorado 8-2 .  If Manibog’s wins today dont get him nationally recognized I dont know what will.  This will be Manibogs first Fargo Stop Sign.