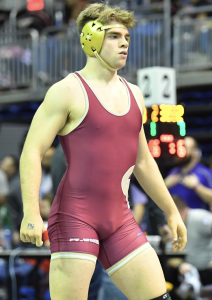 Tim Dendy, of Cypress Woods High School, will continue his wrestling career at NCAA Division III Simpson College in Indianola, Iowa.  Tim was a team captain and four-year varsity wrestler at Cy Woods where he notched over 125 career wins with over 100 wins by fall. He was also a three year varsity football letterman at offensive line and two-year starter. He won two district 10-6A titles at 285lb and 220lb and was a two-time state qualifier.

Dendy will join rising seniors Jacob Irwin (Cedar Park, ’15) and DeVaughn “DC” Scott (Hebron, ’15) as the only Texans on the roster in wrestling-crazy Iowa.  According to Head Coach Nate Hansen, “In the Storm Wrestling program, we’ve recognized Texas as a recruiting hotbed that had been largely untapped in the Midwest. We realized the culture in Texas is geared around football and the opportunities to compete near home at the next level are few and far between. Overall, Simpson College has even implemented some financial aid programs in order to help our recruiting efforts in the state.”

Discussing 2015 recruits Irwin and Scott, “Both are entering their senior campaigns and have been consistent starters for us over the past couple of seasons. DC has received many honors in the conference and nationally, so we’ve been pleased with their effort and what they’ve brought to our program. We are thrilled to have Tim join the program and add to our Texas crew. We foresee him having a similar impact on the program as his attitude and work ethic for reaching his potential are a perfect fit for Storm Wrestling.”

Hansen added, “The nice contrast they’ve come to realize is that in Iowa, the culture is flipped. Wrestling is a priority in our state and they can feel it. Simpson competes in the most competitive DIII conference in the nation for wrestling – the Iowa Intercollegiate Athletic Conference (IIAC). The IIAC has produced more DIII All-Americans and National Champions than any other conference and the same is true of our NCAA qualifier, the Lower Midwest Region, since I’ve come to Simpson (the past 6 seasons). The IIAC puts such a high priority on wrestling that in its by-laws, it is mandated that institutions sponsor a wrestling program. The only other conference in the nation at all levels that requires wrestling to be a member institution is the BIG10. In a time when we see schools drop their wrestling teams, it’s good to know we are protected and would not make cuts to our program.”

You can follow Simpson College Storm Wrestling at simpsonathletics.com.