News Ticker
Tweet
This year is a down year for our D1 wrestlers with only 4 Texas wrestlers making the big dance.  Next year with wrestlers coming off red shirt seasons and more potential wrestlers as freshman making noise we hope to reach double digits for next season.  We did a small break down of the 4 wrestlers who made the NCAA Championships and ask 3 questions to each.
1)What has Texas wrestling done for you?
2)how was the transition from HS to D1?
3) What advice do you have for inspiring collegiate Texas Wrestlers? 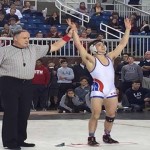 tournament and then injury defaulted to 6th place.  Mueller as a freshman was the 1st freshman to earn All American honors in Virginia program history.  Mueller was a 4x National Prep Champ in his High School career over 4 different weight classes and also winning MOW.

1..Id say Texas wrestling had supported me through my career because I truly believe we are all a big family down in Dallas especially but all over the state.

2. It was a hard one but one that I dreamed of all my life, so since I was living my dream it was all easy.

3. Life is hard. Get over it put your head down and keep working hard.

tournament for the 1st time after placing 3rd at the ACC tournament which qualified him for the NCAA-D1 tournament.  Monday in his redshirt season last year won the National Collegiate Open for North Carolina .  Monday is unseeded even though he has wins over other All American wrestlers this season and will be tested immediately as he will face the #2 seed the very first match.  Monday was a 2x state champ and MOW for Arlington Martin.

165-Quentin Perez of Campbell University from Arlington High School.  Perez is a junior this year at

Campbell University being coached by arguably one of the best wrestlers ever Head Coach Cary Kolat.  Perez didn’t qualify for the NCAA tournament his freshman year, he did qualify last season as a sophomore but went 0-2 at the tournament.  This season Perez makes the

tournament again and will face the #6 seed the 1st match.  Perez was a 2x state champ and an MOW for Arlington HS.

a rock everyone knows he is the reigning National Champion.  Nickal has been to the finals every year except his redshirt freshman year and  is 1-1 in the national finals. Nickal

is  the #1 seed this year and expected to win it again this year.  Nickal is arguably the best wrestler to ever come out of Texas thus far into the college level with the achievements accomplished so far.  Nickal is a 4x finalist and 3x state champ and MOW for Allen

Answers
1.  Wrestling in Texas gave me opportunities not only to wrestle across State but also across the Nation. I traveled with Team Texas to cadet & junior Duals as well as Fargo Nationals.
2.  It was a learning process and I had to be patient. Taking a redshirt wasn’t easy as I was used to competing every week in HS. I learned the importance of training and being 100% ready every time I stepped on the mat.
3.  Make sure you commit yourself to being the best wrestler you can be, take advantage of the training opportunities and competitions during the off-season. Challenge yourself and don’t be afraid to compete against the best.
Tweet