Jackson, from Houston, Texas, and Rankin, from Plano, Texas, were among the top 189 academic wrestlers at the NCAA Division III level.

The duo has excelled on the mat, too, as each qualified for the National Championships in Cleveland March 9-10.

Nominees must have at least a 3.2 GPA (on a 4.0 scale) for the previous full academic year. Transfers and freshmen are eligible if they’ve been in residence at their current institution beginning in the fall of 2016. On the competition side, wrestlers much be a national qualifier in 2016-17 and have a minimum win percentage of at least .500.

“This just continues to show the importance of how athletes in Division III balance their athletic careers and their educational opportunities,” said NWCA Executive Director Mike Moyer. “Division III is the largest in number of teams at the NCAA level and we know these athletes are competing without athletic scholarships and their experiences on the mat and in the classroom exemplify what it means to compete in Division III and in the sport of wrestling.”

“The landscape of Division III really can provide student-athletes with exactly what they want, between a smaller, liberal arts college or a larger state school,” said Moyer. “We’ve seen tremendous academic performances in some of our nation’s finest academic institutions, and many of them exist in Division III. I like to say that college wrestling provides the next generation of our teachers and coaches, but some of these kids are our next generations of doctors, rocket scientists and biochemists.” 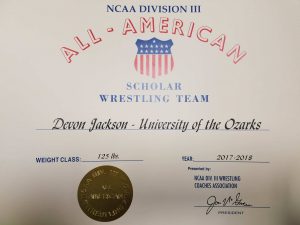