Only 12 wrestlers out of 11,784 boys and 4140 girls made it through the season undefeated.  thats almost 16 thousand wrestlers “15924” that were registered or signed up to wrestle this UIL season,  this includes JV wrestlers as well.  Some could argue that “well they dont travel to the tough competition” or another I’ve heard is “they just wrestle in their area same wrestlers over and over” am sure there is other quotes out there.  BUT. going undefeated and winning a state championship in my opinion should put all the arguments to rest that these wrestlers have achieved something that is hard to achieve and should be praised and congratulated.  These wrestlers made it though OT’s, sickness, injuries, and more.  In some cases they beat a state champ to achieve.

The Class 5A Undefeated Wrestlers

of Argyle in the state finals to secure his undefeated season. Leal went 42-7 the year before taking 4th at 126-5A state

195-Aidan Conner a junior  of Dallas Highland Park went 52-0.  Conner is a defending state champ at this

weight and last year only having one loss going 62-1.  Conner defeated Alexander Torres of Lamar Fulshear in the finals to cap his season.

Dumas in the finals after giving up I believe 5 penalty points.  Last season as a freshman Nwankwo went 31-4 placing 3rd at state.  Nwankwo only loss at state last year was to Brian Andrews of Grapevine the defending state champ in the semi finals.

148-Adelyhda Perez a junior of Uvalde went 36-0.  Perez made her 3rd trip to the finals at this weight

reclaiming the championship that she had won her freshman year going 35-0.  Last year Perez settled for 3rd place at state with a 39-3 record.

The Class 6A Undefeated Wrestlers

where his only loss was to Alonzo Herrera of Allen at dual state that year caps off his 2018 season as the 132lb state champ going undefeated with no close matches except Conner Manderfeld of Arlington Martin at regionals that went into OT that am aware of.  Green dominated this year plus gets my vote for best dressed in a finals line up.

195-AJ Ferrari a sophomore of Allen went 25-0.  Ferrari a National ranked wrestler, “3rd”,  breezed through the

state tournament as he did last year to become a 2x state champ.  Ferrari has only 1 loss his high school career in any match wrestled whether Folkstyle or Freestyle.  That loss was to the #1 National ranked wrestler at the time last season.  Last season Ferrari went 41-1

285-Desmon Williams a senior  of Rockwall Heath went 31-0.  Williams got his revenge this season after

getting defeated last year in the 2017 state finals by an Allen wrestler Nico Manznelli by finally defeating a different Allen wrestler this time Johnny Green in the finals to keep a undefeated record.  Last season Williams went 32-3 placing 2nd. 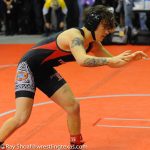 undefeated this season, Liles has went undefeated her whole high school folkstyle career in Texas.  Liles met fellow undefeated wrestler Xochitl Mota-Pettis of Klein in the finals and gave Pettis her 1st loss of the year for a 4th state championship.

185-Lindsey McIntosh a senior of Coppell went 38-0.  McIntosh had to go into OT to keep her undefeated

previous seasons finally takes home the championship although it took SV to do it in the finals over Kendall McGarity of Comal Smithson Valley.  Last season Holloway went 29-6 and didn’t place at state.