Here is a quick recap of the 6A girls UIL State Championship matches:

With former #1, undefeated Esthela Trevino looking on from the Wrestling Texas work station at the media table, #1 Kaitlyn Banas of Cy Ranch faced Morton Ranch’s #8 Brittany Cotter in a rematch of the Region 3 finals the previous week (a 7-3 victory for Kaitlyn).  Banas won by an almost identical score (6-3) to secure the first state individual title in school history. 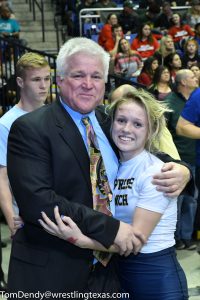 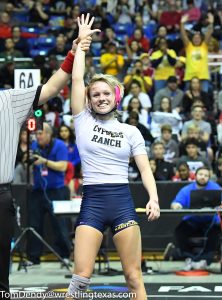 In another regional finals rematch, the tables turned.  Sophomore #2 Camille Fournier of Weatherford finally got past previously undefeated freshman #1 Samara Chavez of Arlington Martin with a shocking pin as time expired in the second period. I think we can expect this rivalry to heat up over the next two years! 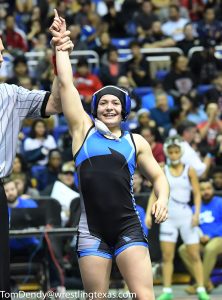 In a rematch of last year’s title bout, the result was very much the same, with Euless Trinity’s  #1 Mack Beggs scoring a major decision over #5 Chelsea Sanchez of Morton Ranch 15-3. 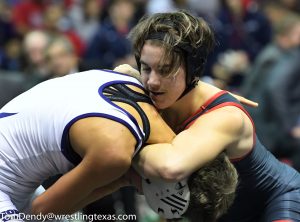 In a rematch with Sanchez, 2-time champion Mack Beggs wins his second title 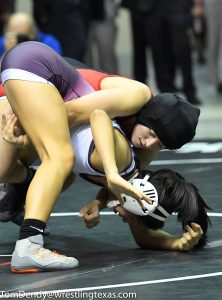 Before the tournament even began, many were saying that the winner of this bracket, with four undefeated regional champions coming in, would be a shoe-in for most outstanding wrestler honors.  Living up to the billing, the match featured #1 Alex Liles, who has three previous undefeated title seasons already on her resume against junior #2 Xochitl Mota-Pettis.  Alex brought her “A” game, displaying her world team form in a 9-1 major decision. As expected, the career undefeated, four-time champion was also took home MOW. 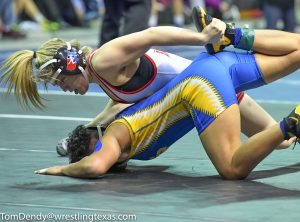 Careeer undefeated Liles is too much for Xochitl

Thanks to the random draw bracketing at state, we saw sophomore #2 Lexie Basham of Northwest Nelson dismantle the previously untouchable junior #1 Hunter Robinson in the semi-finals.  In the finals, sophomore #4 Jordan Suarez of Morton Ranch lasted only 22 seconds before being pinned by Basham.  The four Houston area qualifiers from region 3 finished 2-3-4-5, all of them returning next year with the exception of senior Madison Guinn of Cypress Ranch.  This will be an interesting weight to follow in 2018-19. 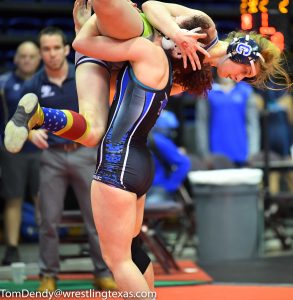 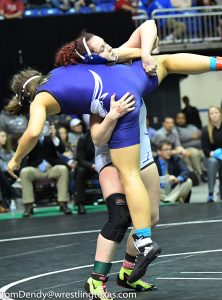 …and again in the finals en route to a quick pin.

Former state champion, senior Kayla DeLeon of Cinco Ranch surprised all of us with her move to 148 at the district 11 championships, in her quest to find the best path back atop the podium.  The plan seemed to backfire almost immediately as she was upset by Katy’s Megan Thomas in the district finals.  Last week, a well-focused DeLeon avenged that loss and never looked back.  #3 DeLeon faced sophomore #8 Nia Miranda of Cy Ranch, last summer’s cadet national champion, in the state finals. Having defeated Miranda 2-1 in last week’s region 3 semi-final, things were a lot tougher in the closest match of the Gold Medal round (although 3 of the last four matches went into overtime).  It took four overtime frames for Kayla to secure a 3-2 UTB victory, and her second state title. 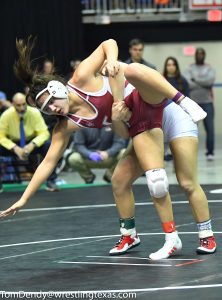 Hard to explain how former #1 Augustina Ijoma dropped in the coaches final poll by a point to Lekas of Plano West.  Lekas dropped 3 straight matches to finish 6th while #2 Ijoma, the senior from Cy Falls, wore down #4 Danielle Saldivar of El Paso Eastwood before finally scoring the fall late in the third period to take the title. The highlight of the match might have been Augustina’s post match reveal of her colorful braids and curtain call hand-raise and curtsey for the sake of our photographers. 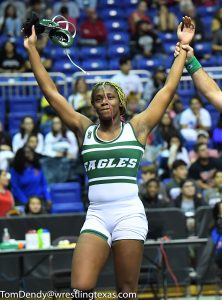 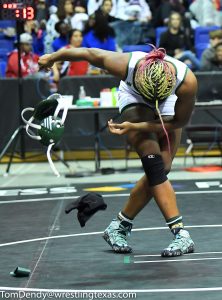 Ijoma with a curtain call… 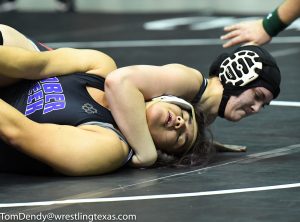 The late season surprise of the year comes in the form of Katy Seven Lakes junior Gabby Holloway. We did not see the 2017 district 11 champion and state qualifier all season and essentially dropped her from the radar.  Wrestling her first match of the season in districts, Gabby ran the tables for two weeks, carrying an improbable 8-0 record and #5 ranking into the final girls match of the night against #1 ranked senior Kendall McGarity of Comal Smithson Valley. This become the third overtime bout in the final four matches of the tournament with Gabby scoring the sudden victory take down to prevail 3-1, finishing her season only two weeks after it started, with a perfect 9-0 record. 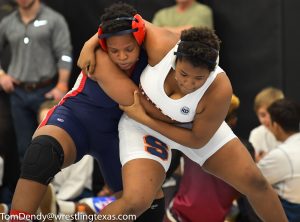 Getting in the game just when it mattered, Seven Lakes’ Holloway runs the table