It was no surprise that Allen won its 9 consecutive UIL Team Championship. Its no surprise that it seems that its Allen vs the rest of the Teams in the State, the whole crowd gets excited when an Allen wrestler gets defeated. But through it all 2 wrestlers have risen above the stress, the BOO Birds, the injuries, the targets on their back, family issues, etc you name the issue am sure they could relate.

I’ll start with Alex Liles, wrestling @ 128 this season one cant say enough about this young lady.  Liles has 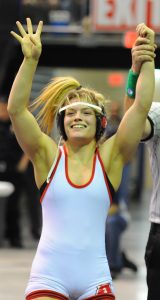 more trophies, titles, championship wins and I would say the most travelled of all the Allen wrestlers in Allen History.  Liles has wrestled around the world and is the #1 National Ranked Wrestler @ 132 for a reason.  Now she becomes only the 3rd woman wrestler in Texas UIL Wrestling History to become a 4x state champion, and I cant confirm,  but the first and only to do so undefeated.  The last 2 ladies that achieved this feat are Hilary Cordero of Caprock 2008-2011 and Shelby Morrison of Bushland 2009-2012.  Alex had 3 other undefeated women in her 128 lb weight class at the 6A division state bracket.  The first was Isabel Leon of Tascosa whom she defeated in the semi finals by a 5-0 decision.  The 2nd was Xochitl Mota-Pettis of Klein who is also Nationally ranked at #3 @ 127 weight class.  Liles defeated Petis by a 9-1 major.  Liles ended the evening by winning the Most Outstanding Wrestler Award for the 6A Women’s Division.  Liles ends her High School Wrestling career as 89-0 and state champion 2015-2018 with 3 MOW’s for 6A girls. 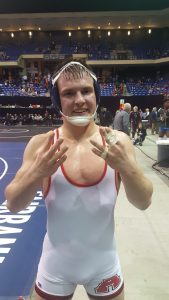 State Wrestling History as the 3rd wrestler for the boys to become a 4x State Champion.  Redlin himself has a trophy case that is busting at the seams with National wins, Fargo AA’s, etc.  Redlin High School Career is 166-10 with only 1 in state Texas loss and that even coming from a Missouri wrestler at the Outlaw Tournament his freshman year.  Redlin has only one loss to a Texas wrestler and that would be team mate AJ Ferrari which happened in Oklahoma last season. Redlin is a Texas  4x champ.  Redlin’s road to state starting at districts were won by falls/tech falls all the way to the state semi finals where Kyle Kretzer of Clear Springs whom he pinned earlier in the year took Redlin the distance in the semi finals where Redlin wins by decision 7-4.  Redlin then defeats Adam Kilgore of Arlington Bowie 4-0 for his 4th state championship.   Redlins state run is 2015-2018

Together Liles and Redlin both are the very first to be a 4x state champion from the same school.  This is a record that isn’t going to be broke in the near future as there isn’t any wrestlers that are 3x state champs that have a team mate to go to 4x.

Redlin next year is off to Ohio State University and Alex Liles is off to the Olympic Training Center.  could we see Liles at the 2020 summer Olympics??? one could only hope.