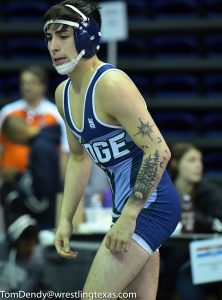 As we approach the 2018 UIL State Championships, many wrestlers are making good on their personal goal of making it to the Texas State Championship tournament.  Gabe Palos is not one of those wrestlers.  Palos began his junior school year enrolled at Eric Solorio Academy High School on Chicago’s south side. While a return to the state tournament might have been a personal objective, the Texas state tournament was not what he had in mind.

During the second week of the school year, while stopping for gas on the way home from wrestling practice, Gabe was robbed at gunpoint, luckily escaping injury or harm.  Already concerned about his safety in a neighborhood with alarming number of teenage crime victims, Gabe’s mom decided it was time to get him out of Chicago. Within 48 hours, he was on his way to live with his aunt and uncle in Cypress, Texas.

“I remember when we were growing up, like when I was 5 or 6, we always felt safe in the neighborhood, like at Halloween we would all go out trick or treating….my mom would let me go to the park alone,” Gabe Recalls. “By the time I was 10 or 12, things were starting to get really bad, it wasn’t as safe to go out.” By the time Gabe entered high school, the violence was hitting close to home.  A family friend and classmate was shot in a drive-by incident only a couple of blocks from Gabe’s home, luckily he recovered after several weeks of hospitalization.  Another classmate, one of the top three in their class, was fatally shot in the head in a separate incident.  “My mom didn’t want me to become just another Chicago statistic,” Gabe said.

By the next week, Gabe was living with his aunt and uncle and enrolled at Cypress Ridge High School. Within two months, he put himself on the map in the 138lb weight class, winning the first tournament of the season.  He had an extra spark of motivation at that event, the Cy Ridge Classic. “My mother came down from Chicago to see me wrestle.  I wanted to do really well.  I wanted to show her that I was doing ok and I could do well here.”

Teammate Esthela Trevino was immediately impressed with Gabe, “Gabe proved to us that he was a great wrestler but we all grew to love him quickly, he became a big part of our wrestling family.”

Cy Ridge coach Tim Ray added that “Gabe is a great kid, he has made our team all around better, even Esthela. He has brought us to a whole different level. I am very proud to be his coach and I’m so happy he has come into our program.” 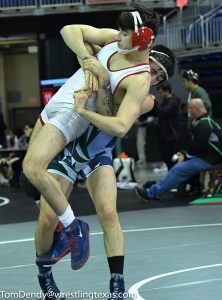 The toughest adjustment for Gabe was the absence of his mom at his events. “She would always make sure I was cutting weight if I needed to, she would video all of my matches, she would let me know my mat assignment…” It didn’t take long though, for his aunt and uncle to become huge fans. “My aunt would close her office early so she could make it in time for dual meets, even if I was just wrestling one match,” he added.

He also enjoys the sportsmanship and camaraderie amongst the wrestlers from other Cypress schools.  He recalls Cy Fair’s Sebastian Jackson, the runner-up at the Cy Ridge Classic, introducing himself and inviting Gabe to train with him and his friends, including wrestlers from other schools.

Gabe is and “A” student and intends to enter a career in law enforcement and/or the military after college. He finished 3rd in the 138lb weight class this last weekend at the Region 3-6A Championships and will be competing at the State tournament. Trevino added that “watching Gabe wrestle this season has been a privilege to me, he has been a great example of what hard work and determination can get you in this sport. Even when I feel like I am not able to do something he is always there to push me through it. I am excited to see him wrestle in the State Tournament this weekend because I know he really deserves it, and great things will come his way.”