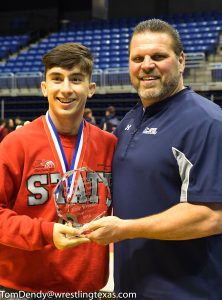 Cypress Lakes Senior Joaquin Batista, Jr is WrestlingTexas athlete of the week.  The 138 pounder has amassed a 32-1 record, his only loss being an overtime thriller in December against defending state champion and top ranked 145 pounder Daniel Manibog of Katy. This month, Bautista was named Most Outstanding Wrestler at the CFISD Invitational, then cruised through the bracket at Houston Westside to win the Chicken Wing Invitational.

Head coach and father Joaquin Bautista, Sr.  is proud of Joaquin Jr. as both a father and a coach.  Coach Bautista said it’s a fine line that you have to balance as both father and coach adding “As a coach , you have to balance being tough on him, then knowing when to step away and come back as Dad and be an encourager.  Over the years I’ve learned to do that, but its always tough.  As a coach you are always confident in your athletes, but sometimes as a Dad, the nerves creep in.  He did great though.  I’m very proud of him.” 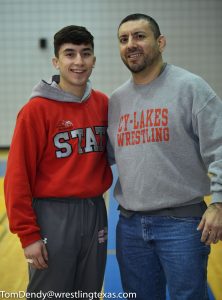 When asked how it was to have his Dad as his head coach, Bautista said “Its awesome, but it is tough at times too, but overall its great.”  Obviously the younger Bautista is taking his father’s coaching to heart as he marches towards the podium at State!