Jan 4. 3pm CST UPDATE:  Tournament director Tim Ray seemed perplexed and almost apologetic in discussing the tournament’s pre-programmed seeding criteria, and the havoc it is wreaking on certain brackets.  Though there is a strong temptation to apply common sense and override the pre-published criteria to set things in a more logical order – that pandora’s box is staying shut – lest he find himself in the midst of a 75-team seeding debate.

The 95 lb seeding should produce a very lopsided bracket – with most of the girls with the strongest win-loss records joining top seed Esthela Trevino in the upper half.

The other major changes include 119 lb – that still has Beggs and Hanna, but is absent Mota-Pettis – who moved up to 128lb.  The 128 lb bracket looks equally tough, with DeLeon moving down and Mota-Pettis moving up, putting two former state champions in the mix.  Even the most perfect seeding criteria fails to work when the statisticians don’t input the data – which is what looks to have happened to Ceravantes, whose 4th place state finish is not reflected in the system, pushing her down into DeLeon’s quarter bracket (assuming it is not updated).

Wrestling begins at 9:30am Friday, with action completed by 8pm. Action photos can be found at http://www.wrestlingtexas.photo/cfisd2018

Below is an updated story reflecting the entries and seeding as of Thursday afternoon:

The 16th annual CFISD Invitational wrestling tournament begins Friday, January 5th at the Berry Center in Cypress, Texas. Although wrestler details and brackets will not be released until Friday morning after weigh-ins – here is a preview of what we could expect from the girls tournament.

Easily the largest and most competitive high school season girls tournament in the sate, this year’s entrants are expected to include 158 ranked wrestlers, 86 top-10 ranked wrestlers (35 from 5A, 51 from 6A), 18 former state placers, 4 former state champions and one defending USAW Women’s Cadet Freestyle National Champion.  With the two pound allowance, we would expect some of the wrestlers to move back down into their intended weights for districts, but we won’t know for sure until the registration list is released later this week.  You can expect to see at least one 2017 state-placer in every single bracket: 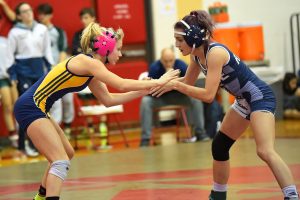 102 lb – Seven of the top-6 ranked wrestlers are in this bracket, including top ranked (5A) Jasmine Howard of Azle.  Third ranked (6A) Kaitlyn Banas placed 5th at state last year and should pick up the top seed based on criteria. #2 ranked Jaclyn McNichols (5A) of Saginaw and #2 ranked (6A) Alicia Messer of San Antonio Johnson are also potential competitors at 102. UPDATE: Howard and McNichols moved out, and #1 [email protected] Fournier moved in and grabbed the number 1 seed, followed by Banas and Messer.

110 lb – Well, this tournament should help the voters sort out the 6A rankings, with the top 4 ranked wrestlers competing, as well as #6,# 7, #8 and #10. Toss in the #3 and #9 ranked 5A girls and you have a tough bracket from top to bottom!  #1 ranked and 102lb state runner up Camille Fournier will likely get the top seed, folllowed by state runner up @ 100lb and #3 ranked Chelsea Sanchez of Morton Ranch. UPDATE: With Fournier moving down, Sanchez grabs the top seed, followed by undefeated Annamarie Crixell (20-0) of Oak Ridge.

119 lb – You think 110 lb looked tough? BOTH defending 110 lb state champions (Azle’s Alexis Hanna and Trinity’s Mack Beggs) are in the 119 lb class alongside defending 119 6A champion Xochitl Mota-Pettis of Klein.  Hanna and Beggs have had some close matches, including last year’s final – but can either one of them stand toe-to-toe with the powerful and athletic Mota-Pettis? There are seven other ranked wrestlers in this bracket – so there is no easy road to the finals. UPDATE: Everyone we talked to was hoping to see Mota-Pettis vs. Beggs, that could have been one of the more entertaining and competitive matches of the day. But with Xochitl moving up to 128lb, we can just anticipate another Beggs-Hanna rematch in the finals. 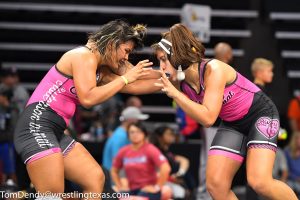 Suarez and Ghent battle in Iowa

128 lb – Seriously, it doesn’t get much easier up at 128 either. Top ranked Serena Cervantes of McAllen placed 4th at state and should pick up the top seed. 9th ranked Alissa Sheikh of Cypress Creek finished 6th at 119lb at State, and could be the #2 seed, leaving the #3, #4, #6, #8 6A wrestlers and 5A  #2 Jacqueline Ghent of CC Veterans and 5A #3 ranked Alex Eliase of Leander Rouse scrambling through the bracket. UPDATE: Kayla and Xochitl meet in the middle here as Kayla moves down and Xochitl comes up from 119lb.  Undefeated Ghent picks up the third seed, Cervantes may be buried in the bracket if stats are not updated in the system overnight.

138 lb – The big question mark at 138lb is College Park’s Hunter Robinson – will she come in at 138 and renew her rivalry with defending state runner-up and former state champion Kayla Deleon of Cinco Ranch, or will she continue to stake her claim on the 148lb weight class – where she is seemingly invincible? Absent Robinson, there are seven top-8 ranked wrestlers in this bracket. 4th ranked (6A) Jordan Suarez of Morton Ranch and 3rd ranked (5A) Eileen Webb of Victoria West will also be in the spotlight as they try to move up the ranks and onto the podium. UPDATE: Hunter answers our question by moving down to 138. Katy’s Mhina Oseitutu has looked really tough this year and picks up the #2 seed. Webb is sitting on the #4 seed on Robinson’s side of the bracket.

148 lb – Based on seeding criteria, 5A state runner up, and #1 ranked Adelyda Perez of Uvalde should get the top seed, with top ranked (6A) Robinson, based on her 3rd place finish at state, taking the second seed.  There are four other top-10 wrestlers including 3rd ranked (6A) Cadet National Champion Nia Miranda of Cy Ranch.  A Miranda-Robinson semi would be their 5th match-up since August, the four previous being won by Robinson albeit by increasingly smaller margins.  We could see the two

#1 ranked wrestlers go head to head in this bracket. UPDATE: As expected, Perez is listed as the top seed, with Paton Klotzer of Oak Ridge joining Mata, who moved down from 165lb, in the bottom of the bracket.

165 lb – There are merely eight top-10 wrestlers in this bracket, including #1 (6A) state runner up Augustina Ijoma of Cy Falls.  While Ijoma might not be seriously challenged this weekend – the field should be super competitive from the quarter finals on with #2 ranked (5A) Andreena Carter of Northwest as well as Azle’s Jewel Lively and Clear Lake’s Mikayla Mata in this bracket. UPDATE: Another administrative anomaly – there is no seeding criteria listed for Ijoma, so she is buried in the mix somewhere. Carter picks of the top seed. We could see a lot of recast rankings at 165lb after Saturday.

185 lb – Both 5th place state finishers are back at this weight, although Langham Creek’s Ashley Molina (5th ranked 6A) is still recovering from an injury and is not expected to compete. That leaves #1 ranked (5A) Eloni Sowell of Humble and #3 (6A) Bianca Rosales of Timber Creek as the top two competitors. UPDATE: No, Humble High School is not entered into the tournament (my bad), so the top two seeds are Rosales and #2 ranked (5A) Natalia Villegas of Corpus Christi Veterans Memorial.

215 lb – Once again, we are looking at nine top-10 ranked  girls here, including #2 (6A) Jackie Mote of Rockwall and #2 (5A) Kacie Rodriguez of Corpus Christi Moody.  Mote should have the top seed based on her 4th place state finish last year. UPDATE: no surprises here, top two seeds as anticipated.

Bottom line – even as wrestlers move around in weight class – there is no place to hide and no cake-walk to the finals. Wrestling starts Friday morning with finals concluding Saturday evening.  action photos can be found at http://www.wrestlingtexas.photo/cfisd2018

Any wrestlers of parents who want to take advantage of our special spotlight gallery pricing should submit an online request by Thursday, Jan 4th.