Texas Blue MS Finished 6th in the copper pool at the holiday duals. The team was about one stud wrestler short of the silver bracket after Friday’s competition. Almost all of the teams losses were extremely close mostly within a match or so. They had some great duals, some with only one point differences. The team consisted of about eight well experienced guys, and I would say about seven others were young with not much experience at that level. The lighter weights got beat on quite a bit early in the tournament but all of them showed improvement by the last day. Yet it was Nate Jesuroga at 84 pounds who dominated , only losing one match taking away a silver medal and  All American status. Older brother Joel at 105 had a great tournament as well,  only losing two matches and taking home the bronze All American.

Jaxson Gonzalez at 125 had a strong showing going 8-2 and only loosing two very close matches. Austin Hartmangruber at 135 also 8-2 all of these guys losses were very close to good wrestlers. Higher in weight it was  Noah Cairns at 180 and Juan Grange at HWT, each earning bronze medals and All American status as well .

Congratulations to this years MS team OW for the VA beach holiday duals,  Corey Camden went a perfect 10-0 and won the gold medal! He physically pounded the 119 pound weight class, sending most of his opponents walking off the mat holding a body part(No joke). He pinned all of his opponents with the exception of three, One he teched, One he majored, and only had one closer decision. Other than that he started fast and ended fast. If you haven’t heard of this kid or seen him wrestle yet , you might want to!

The team had seven total All Americans, and they all did an excellent job helping their team through the tournament.

The elementary team was a very inexperienced one. The team was very young and gave up many weight classes that were empty . However there were some bright spots. This years tournament OW , Little Mason Milsaps (1st grade) at 45,  went 7-3 on the tournament and fought his tail off.

As well as Zayn Navarrete (4th grade) who went 6-4 and had a couple exhibition wins up in weight as well.

All these guys got better! The experience of consistent high level competition over three days just gets it done no question.

Next stop for most of them will be Dixie  nationals Atlanta Georgia. 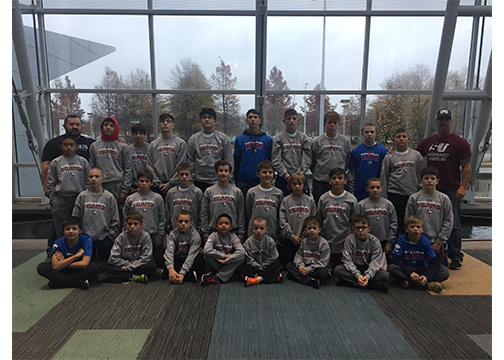