Colin had been seriously thinking of committing to Arizona State University prior to Super32’s.  They were trying to keep him secret- but Colin’s single point loss and dominate third place win attracted several new D1 prospective colleges including Duke, Princeton and of course North Carolina State!

Once Colin and the coaches met on an official visit, it was a decidedly perfect fit for both sides. Colin chose NC State because of their ranking as a Top 25 Engineering school with mechanical engineering and robotics; the team member’s similar personalities and wrestling mentality; as well as a zero tolerance for drug and alcohol use.

The coaches liked Colin due to his modest demeanor and ability to be successful while attending The Kinkaid School (a nationally ranked Prep School) with a 3.72 overall average while training and competing year round in wrestling.  The dedication he had to have to travel an hour each way to school, Club and back home 4-5 days a week showed them his focus and drive to succeed (even in a difficult situation in Houston with hard to find drilling partners)!  Colin having New York ties didn’t hurt either! 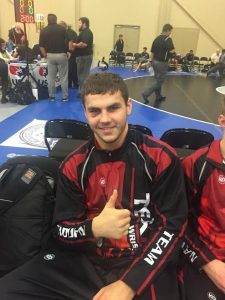 Colin has Without Limits Wrestling coach Mike Moore to thank for connecting several college level wrestlers, Clinicians and Coaches who would come in to work with him at the club.

Being from Texas (and especially from Houston) wrestlers often get overlooked or under valued when they win at competitive tournaments.  Considering it a fluke or luck, however, Colin became an All American in five national tournaments.

Lawler will join Dallas native Nick Reenan who wrestles 174and made it to the NCAA Championships his freshman year.