Now that we are a full week past the state championships, the medals are collecting dust, the celebrations are over and attention has shifted to basketball, track and field, freestyle, greco, summer camps and NCAA wrestling.  We took one look back at the 2016-2017 Texas High School wrestling season, by the numbers.

Rankings: So how did Ray and his team of evaluators do in their second full season of 6A boys rankings?  Not too shabby in terms of picking out the top performers in the state. Ten of the 14 champions came into the tournament ranked #1, and all 14 were in the top 3 of the rankings.  I’m not sure if anyone could have predicted reigning 220lb champion Henry Willoughby’s early exit, though there was some chatter and questions raised after his injury in the regional finals.  The other 13 #1’s all placed in the top 3.  Of the 84 state placers, 79% were ranked in the top 6 prior to the tournament.

Regional Parity: Ok, so you really can’t be taken seriously using the word “parity” in a division that includes the Allen boys, but we undertook the exercise anyway. Granted, the Eagles took home 12 of the total medals, including five of the 14 golds, but even that wasn’t enough to put Region 2 on top in either category. Region 1, which stretches from Arlington and the mid-cities to El Paso, brought home 28 medals and 6 gold.  Region 2 had 24 total with 5 gold, Region 3 and 4 each had 16 medals, but with only 2 gold in Region 3 and 1 in Region 4.  Taking one more slice, and only looking at the top 3 medalist – wrestlers who lost no more than one match last weekend, Region 2 has the advantage with 18, Region 1 had 14, Region 4 had half as many with 7 and Region three came home with only 3.  No matter how you slice it, the north half of the state continues its dominance in this division.

Rankings: While the wrestlingtexas.com rankings held up pretty well in the 6A boys brackets, it was a different story with the girls.  Only 4 of the 10 champions came in ranked number 1 – and they all remained undefeated.  Two gold medalists were ranked #9 coming into the weekend, including 215lb champion Lishawntwanette Bennett of Arlington Houston, who had as many losses on the season as letters in her first name (14). All ten of the top ranked girls finished in the top 5, however. Only 68% of the medalist were ranked in the top 6 before the tournament.

Regional Parity: Compared to the boys, there is a bit more parity in the girls’ medalists across the state.  Region 3 having produced 4 of the five 6A team champions since the split to two divisions, including this year’s first time team champ, Katy Morton Ranch, led with 19 medals. Region 1 and Region 3 were not far off with 15 and 14 respectively.  Region 2 brought home 10.  In terms of top-3 wrestlers, Region 1 led with 12, including 5 champions. Region 3 had 10, with 3 golds. Region 4 had only 5, with no golds, Region 2 had 3 total, with 2 gold. Slight edge to Region 1.

Rankings: Similar to 6A, most of the top ranked boys defended their top billing and took home a title.  Nine of the 14 champions were ranked #1 coming in, and a total of 12 were in the top 2.  Similarly, 12 of the top ranked boys placed in the top 3, one placed 5th, and only one was eliminated altogether, sophomore 132 pounder Mason Kruljac of College Station A&M Consolidated dropped matches to both the 5th and 6th place finishers to face early elimination. Overall, 73% of the medalist were ranked in the top 6 coming into the weekend.

Regional Parity: Pretty much the same story as 6A, except that region 3 gets a little boost, thanks to the Dallas are schools zoned into the Houston region.  Region 1 took home the most golds (6), Region 2 had the most medalists (30) and top-3 finishers (16).  Region 3 and 4 were pretty even with 15 and 16 medalist respectively.

Rankings: The 5A girls were slightly more predictable than the 6A girls, half of the champions came in ranked #1, all were ranked in the top 5. Similarly, all of the top ranked girls finished in the top 5 in the tournament, so no major surprises.  67% of the medalist were ranked top 6 prior to the tournament.  With the lack of information and stats from some of the smaller schools during the season, we were frankly surprised that things lined up this well in this division.

Regional Parity: In 5A, the girls line up closely with the boys in terms of regional medal counts.  Region 1 had the most total with 24, Region 2 took home more than half the golds, with 6, Region 3 and 4 lagged behind with 8 and 7 total medals.  Region 3 had 2 golds, no champions came out of region 4. Looking at top-3 finishers, Region 2 matched their boys’ number with 16, followed by Region 1 with 11.

OVERALL: The table below summarizes the medal count.  Region 1 has the overall edge in champions and total placers, Allen’s boys team keeps Region 2 in the conversation, Region 3 and 4 are neck and neck with the edge to Region 3. 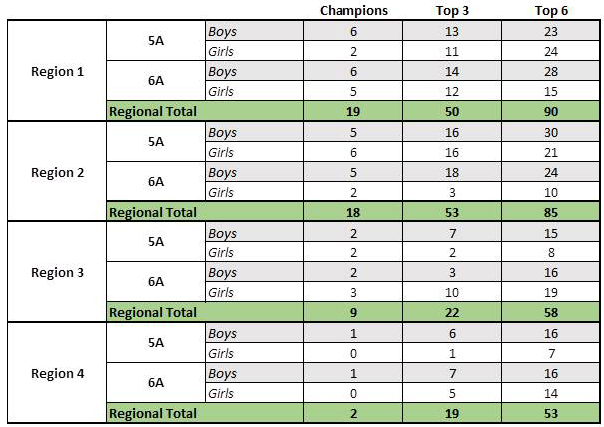